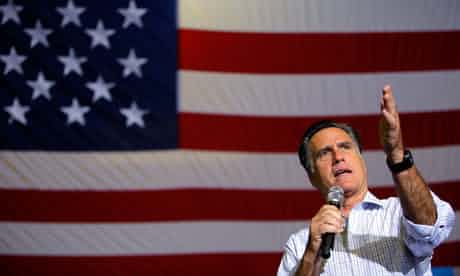 But that didn't stop Romney's handlers trying. They employed his wife Ann to soften him, invoked his Mormon religion to humanise him, and even called upon Clint Eastwood to vouch for him. But in the end, Boehner was right. The American people were never going to fall in love with him. Indeed, he could barely get his own party to fall in love with him. Even his running mate, Paul Ryan, waited until the primaries were nearly over and his nomination inevitable, to endorse him with this warm embrace: "I think we're entering a phase where it could become counterproductive if this drags on much longer, so that's why I think we have to coalesce as conservatives around Mitt Romney."

Luckily for Romney, they didn't have to love him. In the six years he's been running for president, he's been reintroduced to the public several times to no avail. But when it came down to it, the public needed just 90 minutes during the first debate to change their minds. It is telling that while almost everyone concedes he won the night almost nobody can remember a single thing he said. His victory was, in no small part, a reflection of Obama's hapless, hopeless defeat. But it was more than that. He may not have been loveable. But he was plausible – as a candidate, a human being and a potential president. And that was all he needed to be. Thanks to Obama's weaknesses the bar had been set incredibly low. He didn't even have to skip over it. Just a sure-footed step in the right direction sufficed.

From then on, as his poll numbers rose and his confidence grew, the stench of possible victory attached itself to him, overpowering concerns about his likeability and authenticity. That was the smell that permeated the amphitheatre in suburban Denver on Saturday night as several thousand gathered in high spirits to hear the Republican standard-bearer. Unlike most Republican rallies earlier this year, including the convention, they were not going through the motions. They wanted to be there. Spontaneous chants of "three more days" rang out among a crowd in boisterous and belligerent mood. Every time Obama's name was mentioned, a man in front shouted, to general approval: "He's a bum". While most have clearly warmed to Romney, most there seemed more motivated by their fervent opposition to Obama. Nonetheless, the tone of disappointment rather than anger the Romney campaign had adopted clearly resonated with some. "Obama's a great man," the man behind me whispered to his partner. "He's just a terrible leader."

Polls show a narrow majority of Americans believe Obama will win. At least one bookie is already paying out on an Obama victory. But the overwhelming majority of Republicans (71%) believe Romney will be the victor. They may be right.

Romney is, in many ways, an inadequate conduit for all of this excitement. More comfortable with a PowerPoint presentation than a podium, his arrival on stage marks the end of expectation and the beginning of a more pedestrian affair. He appears without trace and delivers a checklist of Obama's failures and his own plans. It's a workmanlike strategy, which satisfied but hardly roused the Denver audience. The high point of the night came not with a searing indictment of Obama or a soaring projection of a Romney presidency, but with the introduction of a scoutmaster with the American flag that survived the explosion of the Challenger space shuttle in 1986. "That is a great flag representing the greatest nation in the history of the earth," Mr Romney concluded. A touching story, no doubt. But not one that will get laggards to the polls.

But a crowd that comes with the express intention of being inspired is difficult to disappoint. He gave them what they wanted and they went home happy.

This, it turns out, is where the Etch-a-Sketch image has settled – one-nation Republicanism. No longer the severe conservative ideologue, but the uniter and doer. The turnaround man who can fix the country like he fixed the Olympics, and work with Democrats in Congress like he did in Massachusetts. The fact that it would be voiced to great cheers here, in Colorado, where he suffered a shock defeat to arch-conservative Rick Santorum during the primaries, is illuminating.

For in the pre-mortems of Romney's candidacy, when it was widely assumed that he was going to lose, the accusation was always that his personality and his campaign were his main liabilities. There were indeed issues with both.

Democrats had used the summer to frame him as effete and heartless corporate raider – a theme that had taken hold during the primaries. Newt Gingrich branded him a "vulture capitalist" for his work at Bain Capital. Back in 2008, his opponent, Mike Huckabee, said: "[Romney] looks like the guy who fires you, not the guy who hires you."

By the time the Democrats got to him, the ground had been prepared. Throughout, Romney duly obliged by making $10,000 bets during debates, casually referring to his wife's couple of Cadillacs, and being caught on video disparaging almost half the country.

"I get the feel he's more for big business," one supporter in Lansing, Michigan, told me at a Santorum rally. "I love Nascar, but he has friends who own Nascar teams, and it's difficult to relate to that." He emerged from the primary battles damaged and deeply scarred.

But a far bigger problem for Romney was the party he sought to represent. To run for the Republican nomination he had to run away from his record as a governor and a senatorial candidate. His support for abortion rights, gun control and healthcare reform and his bipartisan record all had to be denied or distorted for his nomination to stand a chance. On issues like contraception, immigration and taxation, to make sense within the Republican party was to make no sense outside it.

Party elders watched in horror as debate crowds cheered Texas governor Rick Perry when he was introduced as a man who'd overseen 234 executions. Rudy Giuliani said that the candidates' statements on some social issues "make the party look like it isn't a modern party." Jeb Bush worried that the candidates were "appealing to people's fears and emotion," and wondered if he could still count himself among them. "I used to be a conservative," he said. To win, Romney had to scare away Latinos and women – and many remain scared.

Even Romney insisted he had his limits. In February he said: "It's very easy to excite the base with incendiary comments … I'm not willing to light my hair on fire to try and get support. I am who I am." By July, Sarah Palin was insisting that if he couldn't blow himself up the very least he could do was light her candle. ("Well, light our hair on fire, then!" she told Fox News).

The first debate marked the beginning of his revival because it signalled the moment he started running away from the his primary stances and back towards his record – or at least part of it. He posed as the moderate who could reach across the aisle and get things done in Massachusetts. If this has made him viable, it has left him no less vulnerable. For every position he takes, there is at least one youtube clip of taking a contrary position elsewhere.

His Republican base do not seem to mind that, so long as they think it is a winning strategy. When they selected him, albeit grudgingly, they traded authenticity for viability. They preferred someone who could beat Obama to someone who was right. Now it's Romney's turn to fulfil his part of the deal. With just one day to go, the polls are so tight and close they can almost smell it.

follow on twitter
#JosephineBaker ceremony in Paris https://t.co/M8gg06zfTl
RT @SynergiCC: On Thursday, watch out for the release of @JamesNazroo's presentation on #BLM, #racism and #health harms in the UK. #FromPle…
This is basically the thread I put out last night...but soooo much fancier-looking. https://t.co/bWUIGEmtBY
@tjr_london In Paris for the Josephine Baker ceremony I'm afraid.
RT @BritishVogue: As she leads Barbados towards republicanism, charismatic Prime Minister Mia Mottley talks to @GaryYounge about shaking of…
RT @MCRSociology: As #JosephineBaker is elevated to the pantheon today, @garyyounge writes on race, racism and republicanism in contemporar…
@PriyamvadaGopal Thanks @PriyamvadaGopal . Where would I find a comprehensive account of that conference or start l… https://t.co/40Ud2rS6Kj
"African Americans enjoyed an honorary, if contingent, racial status: free to write about racial atrocities in Amer… https://t.co/vRobBofK5D
@chakrabortty What a lovely message. I miss those days. I miss you (not sure I miss the office as such. In Farringd… https://t.co/eviENdkaAp
6/ "Mine is a name with a story from afar, that doesn’t have to be told, that is not often misspelt and that doesn’… https://t.co/F47tepvsxY
© Gary Younge. All Rights reserved, site built with tlc
Antabuse buy Buy discount vardenafil How to get a cipro prescription from your doctor Buy valtrex online with free samples Tadalafil online us Where can you buy cialis Buy sildenafil generic online