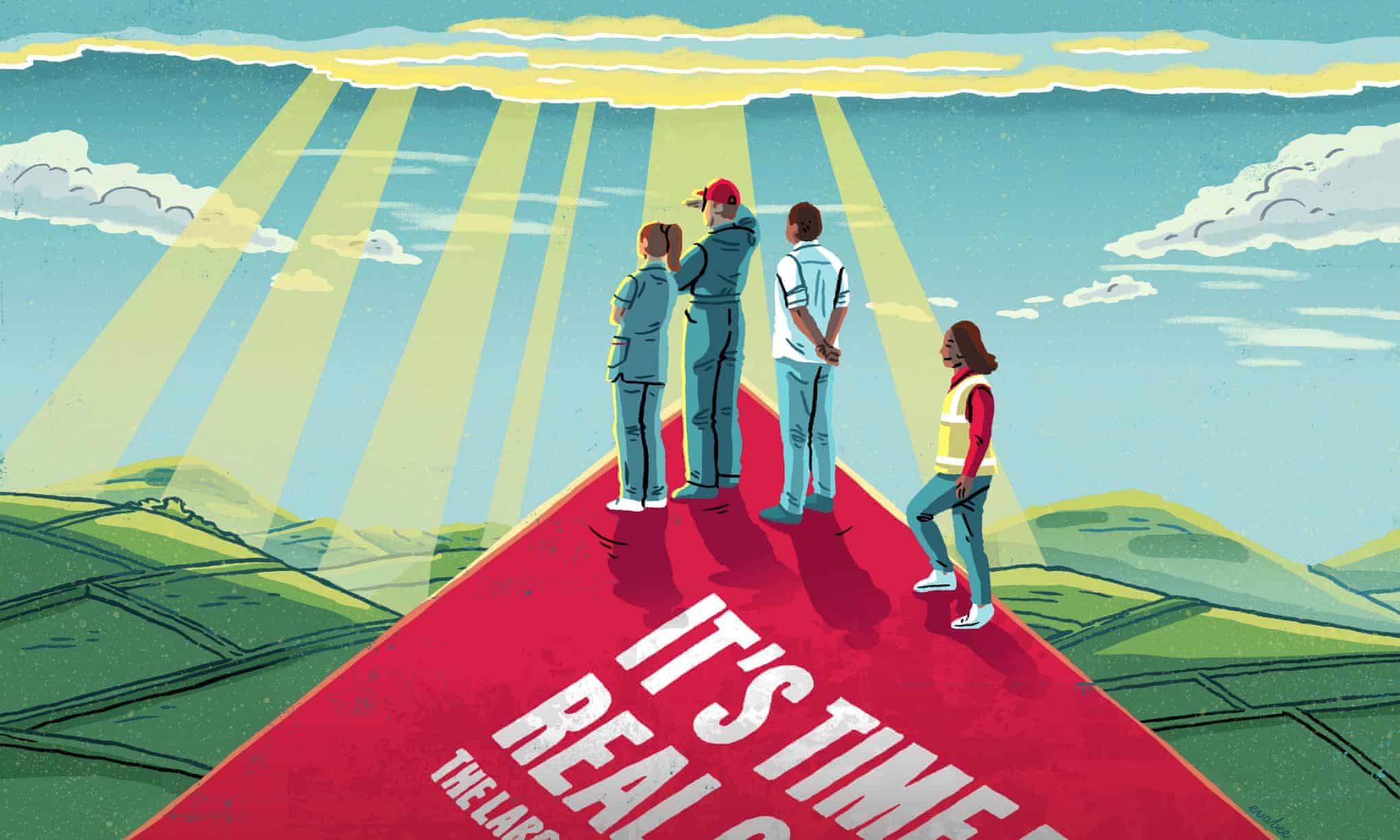 After a decade of decay, Labour’s manifesto offers us hope for the future
The Guardian,
Illustration: Eva Bee

In 2007, the renowned intellectual of the left Stuart Hall was asked if it was hard for him that the more equal world he had argued for his entire life seemed increasingly remote. “I feel the world as stranger to me than I ever felt before,” he replied. “Should we have a political party that believes we should tune ourselves up to the global economy? Of course we should – but not two, or two and a half! It’s when everyone is operating in so many of the same parameters that the only debate you can have is a sort of Swiftian debate ... shall we eat the children now or later on?”

When Jeremy Corbyn stood for leader of the Labour party, his stated aim was to broaden that debate. His victory was the product not of a movement but a moment. He emerged at a time when social democratic parties across the west were being crushed because they had provided inadequate responses to a generation of wage stagnation, deregulation and neoliberalism, more than a decade of war, five years of crisis and austerity and an ever-intensifying climate emergency.

The issue was whether the centre left was capable of providing a vision of society in which the poor did not pay for the crisis of the rich, the weak would not be scapegoated for the follies of the powerful and the planet did not pay for everything. Corbyn won not because he had all – or even any – of the answers, but because he was at least prepared to put the questions. He stood for more than office. Elected the year before Britain voted for Brexit and America voted for Donald Trump, his unlikely ascent did not spark the crisis in Labour’s relevance; it was a response to it.

The Labour manifesto, released on Thursday, exemplifies why a course correction was both urgent and necessary. It does not justify everything the party has or hasn’t done over the past four years. What it does do is elevate the electoral conversation beyond Corbyn the individual, to the set of priorities, values and interests that his election as leader represented.

For most of my political life, Labour has attempted to cattle-prod me to the polls with the threat that if it lost, things would be much worse. It is a relief to have a party woo me with the notion that if it wins things could get much better. The party’s commitment to taxing the oil companies to green the economy, taxing the tech giants to pay for broadband, nationalising the railways, building council houses and offering free training for adults are changes I would like to see and would be prepared to pay my share for. Moreover, they are underpinned by values that have people rather than profit at their centre.

A manifesto of this nature expands the sense not only of what is desirable but what might be possible. It forces other parties and commentators to explain why they don’t want those things or aren’t prepared to prioritise them. They will vacillate between claiming that Labour cannot pay for its promises, and complaining that they don’t like how it will pay for its promises, and insisting that the promises are undesirable, untenable or unworkable. Predictably, the very party that squandered more than £2bn on preparations for a no-deal Brexit and £1bn for the support of the Democratic Unionist party will inevitably cry profligacy.

Those who claim it will wreck the economy must consider who, ultimately, this economy is for. When the fifth-richest country in the world cannot feed its children, house its working poor or treat its sick, its economy is already wrecked. Those who lamented the choice in candidates on the debate stage on Tuesday now have the opportunity to contemplate the choice in agendas – to reflect not simply on who will win, but on what might change. The manifesto will primarily be understood in the context of the next three weeks. That is understandable. The point is not to lay out these plans and start a conversation, but to get people to vote for them and start a transformation. The manifesto’s proposals will be polled, its inconsistencies pored over, its arithmetic scrutinised.

In 2017, the manifesto marked a shift on the doorstep. When people complained about Corbyn, canvassers could pivot to the policies. Often, it turned out, voters liked what he would do more than they disliked him. For the first time since his election many party members emerged from their defensive crouch and advocated not necessarily for him, but for the agenda that made him possible.

But while the electoral impact of these manifestos are important they are essentially political documents. If there’s a serious criticism of Labour to be made here, it’s that too little of substance has emerged between the last manifesto and this one to remind us what the party is for and why we should care what it does. In the words of Lynton Crosby, the Australian consultant who shapes Conservative electoral strategy: “You can’t fatten the pig on market day.” The case against poverty and inequality, militarism and bigotry, must be made constantly and consistently, not presented as a one-off party trick.

There is a significant, if dormant, constituency for that discussion. On the day the 2017 manifesto came out, I sat in on a focus group of undecided voters from Harrow, north London. That day Sarah (she withheld her second name) had driven to London from Edinburgh, where she had been visiting her mum, listening to the radio as she travelled. Taxing people more for earning more than £80,000 seemed reasonable to her. “Things have swung too far the wrong way,” she said, setting the tone for the group. It was time to “make things fairer”. Debbie was broadly in agreement: “We need to show people we care about them.”

While the press deplored this descent into socialist orthodoxy and Marxist dogma – and almost certainly will again – the reception around the table was far more tempered and sympathetic. Debbie and Sarah weren’t just commenting on the coming election – they were talking about the accumulated decay of the previous decade and how it might be reversed. As a country, they thought we could do better. One of the casualties of the media’s chronic lack of curiosity about Corbyn’s appeal both within and outside the Labour party was the portrayal of his support base as swivel-eyed and hard-headed, when it has always been far more relatable and less ideological.

This is not 2017. We don’t know what effect this manifesto will have. We shouldn’t assume it will be the same. The Tories have a different leader; Brexit is a different beast; public perception of Corbyn has shifted; traditional allegiances are softening. Anything could happen.

But the one thing that has happened is the presentation of an alternative. Living at a time when many find it easier to imagine the end of the world as we know it than the end of capitalism as we know it, that is no small thing.