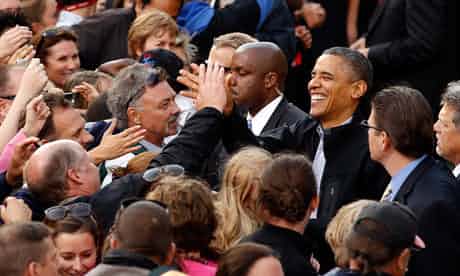 Americans deserve a better choice in this election than the one they've got
The Guardian,
Photograph: Kevin Lamarque/Reuters

At a dinner table in Akron, Ohio, recently half a dozen Democratic activists took a break from trashing Ralph Nader for allowing a Bush victory in 2000 to discuss the material benefits of Barack Obama's first term. One had been able to keep his children on his healthcare plan after graduation; another with a pre-existing condition had been able to move plans without penalty. Then there was an awkward silence, broken by the mention of the jobs saved in Toledo, 140 miles away, by the auto bailout. That brought us on to Republican Mitt Romney's call to "Let Detroit go bankrupt". And soon, the conversation is flowing as easily as the beer as talk turns to how bad things might have been – and could yet be – with Republicans at the helm.

Such are the cramped parameters within which Democratic loyalists converse. Questions about poverty, bankers, inequality, climate change or drone attacks are not engaged with a defence of Obama's record on the economy, regulation, the environment or foreign policy but avoided with a threat: Romney. Speculation about what Obama might have done differently are met with arguments about what Bush did do wrong. Inquire if Obama will get more done if elected, and they shrug and point to the obstructionist Republicans in Congress.

Dare to prod further as to why anyone should vote for him given the likelihood that Republicans will win in Congress and they'll take you right back where you started: Romney. Any question about the good things that might have happened as a result of Obama's victory in 2008 is short-circuited by a response about the bad things that might happen as a result of his defeat in 2012. Hope curdled to fear. Everyone can tell you how things get worse; no one can tell you how they get better.

The paradox of large numbers of people investing heavily in a result without expecting a great deal from the outcome is particularly stark during a presidential election. On the one hand, there is the hoop-la: the polls, bumper stickers, stump speeches, conventions and debates. All the trappings to celebrate the assumed connection between political power and the popular will. On the other hand, there is cynicism: the low turnout, voter suppression, billionaire donors and contrived controversies. All the evidence of a system corrupted by money and openly rigged .

These contradictions are not unique to the US. Britain is midway through its conference season, where the three main parties lay out their stalls. They have fewer members combined, the Economist reminded us recently, than the Royal Society for the Protection of Birds. Yet we treat their annual gatherings as though they are moments of major national significance.

How could they? They adhere to the golden rule that those who have the gold make the rules. That has long been a problem. In 2008, Obama and his Republican challenger, John McCain, spent as much on television ads in Florida as all the parties spent on the entire 2010 UK general election. Now it's even worse. A few years ago the supreme court loosened the rules to allow unlimited donations from anonymous sources. Now the candidates spend almost as much time courting the rich as they do on the stump. "It's really sad," Arnold Hiatt, a key Democratic funder, told the New Yorker. "You could buy this election for a billion dollars."

While this makes a mockery of democracy it doesn't create an illusion of choice. The outcome in these elections matter. Hanging chads and slender margins notwithstanding, by the end of the night on 6 November, either Obama or Romney will be president. There are other candidates. But that is the electoral choice. It is not a marginal one.

The case against the Republicans is not difficult to make. Their numbers don't add up, their arguments don't make sense, and their record in office contradicts virtually every one of their professed principles. During the eight years prior to Obama's presidency they ballooned the deficit, crashed the economy, increased the power of the state over the individual, and sent America's standing plummeting throughout the world. They built that.

Insisting it makes no difference who wins is not tenable. Last year Chelsea Shinneman of Roanoke, Virginia, had a baby, Harrison, who was born with a congenital heart defect. Were it not for the new healthcare act, Harrison would have been destined for a lifetime of sky‑high insurance premiums.

In Fort Collins, Colorado, the head of the Homelessness Prevention Initiative, Sue Beck-Ferkiss, could point to 36 families in the area who had been helped by stimulus money. Had there been any Latinos at the table in Akron, they might have added to Obama's achievements his executive order to halt the deportation of young undocumented immigrants. Had there been soldiers, they might have talked about the withdrawal of combat troops from Iraq.

So it matters who wins. Just because improvements are incremental rather than transformative doesn't mean they're not important. The problem isn't that there's no difference between Obama and Romney but that there is insufficient difference between what Obama has delivered and is offering and what the country needs at a time when poverty is rising, wages have stalled, civil liberties have been suppressed, kill lists drawn up and drone attacks escalated. It is possible to indict the Republican party and vote for Obama without endorsing his record or making excuses for his failures.

But it is not possible to understand his failures without recognising that an electoral system funded by the wealthy will never be capable of distributing resources and power equitably, regardless of who is in charge. Why would it? How could it? The fact that this is the choice Americans are faced with doesn't mean they don't deserve a better one. It simply reflects why, under these terms, a better choice is not possible.

follow on twitter
RT @BernardineEvari: Please follow the groundbreaking online #MuseumofColour UK, founded by the unstoppable Samenua Sesher. The 1st gallery…
RT @EthnicityUK: Gary Younge is interviewed by @sonikkalogan about his work on racism and gun violence in @the_hindu #DataPoint podcast. h…
RT @thefreedomi: 🚨 NEW: Saudi women’s rights activist & academic Salma al-Shehab was sentenced to 34 years in prison + 34 year travel ban f…
RT @LRB: #DawnFosterForever! On Thursday 15 September at the @LRBbookshop, @BizK1, @piercepenniless, Lynsey Hanley and @garyyounge will d…
RT @ShowunmiV: This is how we support Black women and girls https://t.co/8YmgV21zHo
RT @sonikkalogan: It's #DataPoint Pod Thursday! In this week's episode, I talk to @noraneus, @garyyounge and @Casey_J_Wooten about the U.S.…
RT @bgnoiseuk: Next month, @LRBbookshop will host an event to celebrate the life and work of Dawn Foster with @BizK1, @piercepenniless, Lyn…
Help me Twitter. The quote: ""You can cut all the flowers but you cannot keep Spring from coming." is most commonly… https://t.co/Xs7JkiOEd5
RT @the_hindu: #DataPoint | This Thursday, @sonikkalogan takes a look at the #US gun violence epidemic, as mass shootings continue to grow…
City workers get double-digit wage rises while lowest-paid see 1% increase - “Them’s the breaks” https://t.co/XeVyG72iA5
© Gary Younge. All Rights reserved, site built with tlc
Where to buy cheap renagel Best place to buy motegrity Where to buy trandate online Where to buy cheap astelin How do i get albenza Actos best buy Cozaar online india Buy clarinex pill How to buy cheap lotensin Can you buy furosemide over the counter usa