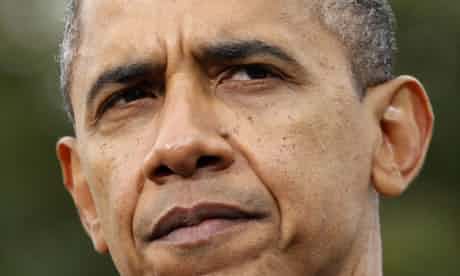 Barack Obama: time for the president to show some anger
The Guardian,
Photograph: Kevin Lamarque/Reuters

The appeal of any presidential candidate, argued Richard Nixon's speechwriter, Raymond Price, is based on a "gut reaction, unarticulated, non-analytical, a product of the particular chemistry between the voter and the image of the candidate … [It's] not what's there that counts, it's what's projected."

In 2008, all the intestinal love went Obama's way. He didn't just advocate change, he looked and acted like change. While John McCain and Sarah Palin peddled in fear, Obama projected hope. He sent a "thrill" up MSNBC news anchor Chris Matthews' leg and tears down old ladies' cheeks at rallies.

Describing the crowd's reaction to him in Rockford, Illinois, Time's Joe Klein wrote: "The white people … are out of control." The New York Times' David Brooks claimed: "With his multi-ethnic family and his globe-spanning childhood, there is a little piece of everything in Obama."

When people – not all, but enough – looked at him, they felt something before they thought something, and it made them feel better about themselves and the country. Inevitably those feelings would fade in four years when they would also see his record. Fortunately for Obama, until now relatively few were focused on him. Instead, it was Romney's chemistry, or rather lack of it, that dominated.

Democrats successfully framed Romney as a wealthy, out-of-touch individual who didn't understand the needs of ordinary Americans. When people – once again not all, but enough – thought of him being president, they checked their gut and it made them queasy. In July, a woman in West Virginia asked Republican House speaker John Boehner: "Can you make me love Mitt Romney?" Boehner said: "No. Listen, we're just politicians. I wasn't elected to play God. The American people probably aren't going to fall in love with Mitt Romney."

Wednesday's debate didn't make people like Romney but it did give some pause for a second look. It also shifted the focus back on to Obama and created the space to frame him in potentially damaging light. His distracted, absent, distant manner at the podium speaks to a criticism that has often been made that he is aloof, dispassionate and even haughty.

This matters because narratives only work when they chime with a pre-existing condition. Tucker Carlson's ridiculous bombshell didn't work because few people seriously believe that Obama, who was raised by his white mother and grandparents, really hates white people. Whitewater didn't work against Bill Clinton because few people seriously believed that he was financially corrupt. The Monica Lewinsky scandal, on that other hand, did work, because few had any trouble believing Clinton could not control his sexual appetite.

Throughout his presidency, Obama has given the impression of being in some way emotionally disconnected and at times almost passive. This would be less than impressive at the best of times. But during a period of severe economic duress and political gridlock he has often appeared either uninterested and unwilling, or unable to fight back. "You get the sense that this president, while intellectually engaged, is not emotionally engaged with what the American people are going through," says Michael Fletcher, the Washington Post's economics correspondent. "People want to feel there's someone out there fighting their corner even if that person doesn't win."

Some have argued that as the first black president, anger is simply not an avenue open to him if he wants to keep the public onside. But as Salim Muwakkil of In These Times pointed out, Obama runs the risk of falling into another stereotype that can be equally problematic.

"In some ways it's the epitome of the cool style," he said. "Almost ironically it's a stereotype. It's like the pimp from Iceberg Slim. The guy who was not perturbed by anything. Murders would happen in his vicinity and he'd carry on as if nothing happened."

Whatever the reasons, his performance on Wednesday reinforced the notion of a man not fully in the moment or in command of events. According to Ron Suskind's Confidence Men, Obama's former chief economic adviser, Larry Summers, reportedly told Peter Orszag: ""You know, Peter, we're really home alone. There's no adult in charge." That's the impression he gave on Wednesday night.

Last week, Newt Gingrich disparaged him saying he was "not a real president" and wondering about his "rhythms". It was more unsubtle race-baiting from the man who coined the term "food-stamp president". But one comment in particular stands out. "He doesn't do anything that presidents do, he doesn't worry about any of the things the presidents do, but he has the White House, he has enormous power, and he'll go down in history as the president – and I suspect that he's pretty contemptuous of the rest of us." That charge has currency today that it didn't have before.

This isn't the first time Obama has turned in a lousy debate performance. He's a good speaker; he's never been a good debater. But it's the first time he's been so bad at such a key moment. The most common, generous, explanation is that it's just not in his character to become excitable and animated, and that authentic beats empathetic. Maybe. But present beats absent and, given the country's needs, urgent beats laid-back.

"Americans would like their president to be sick and needy," explains James Zogby, head of the Arab American Institute and executive member of the Democratic executive committee. "Bill Clinton would shake literally tens of thousands of hands every Christmas. Each person he'd meet would say: 'I think he remembered me.' Obama doesn't like to do it. No real person would like to do it. And therefore he doesn't do it. And people resent that. They want their president to really need them. He doesn't. He's OK, he's relaxed, cool, calm. I'd love him to call me up like Clinton would … people like that, he doesn't need it."

But he needs them. And on Wednesday, at least, he lost them.