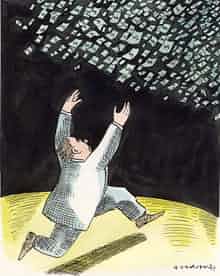 As the US nears the brink, the budget row is exposing Republican madness
The Guardian,
Illustration by Andrzej Krauze

Back in 2004 I met a pleasant Republican called Burton Kephart, who had lost his son in Iraq and wanted to save my soul. Opening his Bible at Matthew and Romans, he told me I was born a sinner but that, if I accepted Jesus into my heart, I could be saved.

I asked what would happen if I didn't. "Eternal judgment," he said. "Hell."

You're never that far away from the apocalypse in US culture or politics. The most popular books of the past decade, the Left Behind series, are based on a fictionalised account of the Judgment Day. The 12 books sold more than John Grisham. "I fear for this country if [John] Kerry wins," said Kephart. "God has a plan for the ages. Bush will hold back the evil a little bit." The facebook page "If Sarah Palin wins in 2012 – it will be the end of the world!!!" suggests a similar reflex among liberals, even if it's generally not religiously inspired.

So when President Barack Obama talks about "averting Armageddon", there is good reason to be sceptical. In a nation given to hyperbole, where 59% believe the events in Revelation are going to come true, there's always a swarm of locusts on the horizon.

Nonetheless, the truth is that, unless Obama reaches a deal with Congress by 2 August to raise the country's debt ceiling, effectively extending its credit limit so it can borrow more money, very bad things are going to happen. The US government will effectively run out of money. But it would go into default not because it can't pay its bills – like Greece – but because it won't.

Until last week this seemed unlikely. Then on Wednesday evening a meeting between Obama and House majority leader Eric Cantor ended acrimoniously. Democrats want to reduce the budget deficit by cutting spending a lot and raising taxes a little. Republicans insist that only spending cuts are acceptable. The meeting ended with the president saying: "Eric, don't call my bluff… This may bring my presidency down, but I will not yield on this."

"The noble art of losing face," UN weapons inspector Hans Blix used to say, "will one day save the human race." But at this point the two sides seem so dug in that it is difficult to see how they could climb out to reach common ground. Blix's dictum may prove as successful at salvaging a budget deal as it was at preventing the Iraq war.

The most likely outcome still remains a fudge that allows both sides to claim victory. But that is no longer the certainty it was at this time last week. The US government has started making contingency plans, and ratings agencies have put the politicians on notice.

Asked what would happen on 3 August if no deal was reached, Obama, who is no alarmist by instinct, said: "There are about 70 million cheques that go out each month." These included cheques for social security, veterans and people with disabilities, he said, adding: "I cannot guarantee that those cheques will go out on 3 August, because there simply may not be the money in the coffers to do it."

That's just the beginning. Among the other effects of a US default could be a spike in interest rates, a collapse in the dollar and a sudden return to global slump. And, although 2 August is the deadline, financial markets are no great respecters of legislative timetables. As soon as they think there's a serious risk of default, they will act. Congress may not have to take the country all the way to the brink: the brink may come to it.

Some liberals have criticised Republicans for playing Russian roulette with the fragile economy. Raising the debt ceiling is a routine part of the way government works. It happened 17 times under Ronald Reagan and seven times under George W Bush. The Republican stand-off, they say, irresponsibly places partisan political goals above the national interest.

This misstates the problem. Questions of public funding are supposed to be political. We elect people, in no small part, because of the economic priorities they set and their ability to enact them. The issue here is not that the Republicans have politicised the ceiling but the disingenuous, dystopian and dysfunctional politics they are espousing.

It's no mystery how the US got to this point. In 2000, Bush inherited a budget surplus, only to implement massive tax cuts – with the most going to those who needed it least – launch two wars and oversee a recession that turned into a slump, thanks to a huge banking crisis.

The Republican plan aims to put the burden of these military follies and that economic mismanagement on the backs of those who have suffered the most from them and bear the least responsibility for them: the poor.

Take food stamps: assistance given to those in the wealthiest country in the world who are so poor they do not have enough to eat. Between 2008 and 2011 the number of those living on food stamps increased by almost 50%, putting one American in seven in the programme. The Republicans would like to trim that budget by about 20%. They have also voted to cut another health and nutrition scheme for poor pregnant women, infants and children by 11% and to cut healthcare benefits for the elderly. They would rather do all this than raise taxes on corporate jet owners, hedge fund and private equity investors and oil and gas companies.

Obama has, characteristically, already conceded most of what the Republicans want. He offered to divide cuts and tax rises 83%:17% respectively. Earlier this year a Republican report claimed that an 85%:15% divide was enough for successful fiscal consolidation.

The Republicans are characteristically overplaying their hand. Obama needn't have given away the store. A recent Gallup poll shows that only 20% of Americans want to see a deal with spending cuts only; more than double that figure want an equal mix of cuts and tax rises, mostly tax rises or only tax rises. True, twice as many would prefer their congressional representative to vote against raising the ceiling than for it. But that is still fewer than half, and more than a third say they don't know enough to say. On this issue, as with so many others, the nation is crying out for leadership, but, although Obama was elected to make a difference, instead he keeps on splitting the difference.

But finally it exposes the dysfunctionality within the Republican party, whose conservative wing is behaving less like a mainstream electoral force than an ultra-left sect being advised by a petulant two-year-old. It is simply not economically feasible to cut the US deficit without raising taxes, given that Americans are enjoying their lowest tax burden since 1958.

'Re-election is the farthest thing from my mind," representative Tom Reed, a newly elected Republican from upstate New York told the New York Times. "Like many of my colleagues in the freshman class, I came down here to get our fiscal house in order and take care of the threat to national security that we see in the federal debt. We came here to do something. We don't care about re-election." That's just as well. The only time Cantor's plan was put to the voters, Republicans lost a seat in a by-election that they had won only six months earlier with 74% of the vote.

The four horsemen are saddling up, with Reagan's presumptive heirs ready to ride them into the sunset.

"The choice is for the United States to default on its debts for the first time in our 200-year history, or to accept a bill that has been cluttered up," explained the president in a radio address. "This is yet another example of Congress trying to force my hand… Unfortunately, [it] consistently brings the government to the edge of default before facing its responsibility."