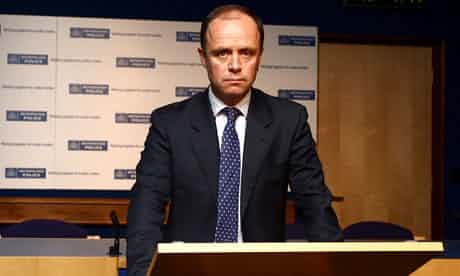 "Action," argued philosopher Hannah Arendt, "without a name attached to it is meaningless." It leaves you with objects without subjects and consequences without causes.

So it is with the resignations that have emerged from the phone-hacking scandal so far. Time and again people with huge salaries and immense power acknowledge they had responsibility, but are careful not to concede accountability, for fear that it will suggest culpability. Nobody claims they were just following orders because apparently there were no orders and no one to give them. It appears what we assumed were extremely hierarchical organisations such as News International and the Metropolitan police apparently operated like anarchist collectives.

So with each new revelation – and not before – those who resign concede that "apparently" something terrible was done on their watch but insist that they knew nothing about it nor did anything related to it. They left not because of any wrongdoing but because the wrongs were being done to them – wait for it – by a hostile media. Then they make a break for it to spend more time with their lawyers.

Rebekah Brooks, former News of the World editor and chief executive of News International, said she left because she was feared her presence was "detracting attention from all [her] honest endeavours to fix the problems of the past".

Andy Coulson, former News of the World editor and prime-ministerial spokesman, said "when the spokesman needs a spokesman, it's time to move on".

John Yates, the senior police officer who took just a few hours to dismiss Guardian allegations that the original hacking investigation had been bungled, framed his resignation not as a matter of public disgrace but public service: "This has the potential to be a significant distraction in my current role as the national lead for counter-terrorism. I was unable to give total commitment to the task of protecting London and the country during this period."

So we have a narrative with no protagonists. Ignorance is claimed lest malfeasance be inferred; a verdict of incompetence is invited in preference to incrimination.

Former Met police commissioner Sir Paul Stephenson, who, like Yates, came to the Guardian offices to try to persuade the editor that the the focus on phone hacking was misplaced, said: "I had no reason to believe this was anything other than a successful investigation. I was unaware there were other documents in our possession … With hindsight, I wish we had judged some matters involved in this affair differently. I didn't and that's it."

The ever-growing cast of the responsible but unaccountable is to some extent emblematic of the broader and deeper issues involved. The phone-hacking scandal has not just exposed systematic illegality but, arguably more worryingly, it has laid bare systemic corruption.

Who did what, when and who knew what and when is, of course, extremely important and it is in the dogged pursuit of those facts that this scandal has unfolded as it has. But take a step back and there is a bigger and far more corrosive threat to the popular understanding of how power in Britain works.

The ruthless disdain with which News International treats its enemies is well known. Its attacks on trade unionists, socialists, anti-war activists, Muslims, asylum seekers and so on is there for all to see. If recent allegations are correct, they reveal the utter contempt with which they treated those they claimed to be supporting. While running the campaign for Sarah's law, named after a girl who was killed by a paedophile, they hacked the phone of Sarah's mum. While bellowing their support for British troops in battle, they were hacking their families' phones when they died. While professing outrage at the 7/7 terrorist attacks, they were hacking the victims' families phones.

The collusion between politicians, police and News International took place on such a scale and with such a degree of blatancy that one can only assume that, on the level, those involved seriously believed they were doing nothing untoward. Their gravitation towards power was, of course, conscious. But the sense of entitlement and impunity that went with it was likely unwitting. They keep insisting they haven't done anything wrong because their moral compass is set to a place where what they did was OK.

Take just one, tiny, corner of this vast rancid network – the upper echelons of the police and News International. Assistant commissioner Andy Hayman, who led the initial inquiry into the hacking investigations in 2006, used to dine with News International executives before giving their company a clean bill of health and doing work for them after he left the force.

The Met then employed a former employee of the News of the World, Neil Wallis, the very paper it had been investigating for phone hacking, as a media consultant. Stephenson then took £12,000 worth of free hospitality from a luxury spa where Wallis worked.

When Sir John Stevens stepped down as commissioner in 2005 he was given a job as a columnist at the News of the World.

Two weeks ago all of this would have been the stuff of conspiracy theorists; today only a naif would disregard it.

The Christmas lunches, garden parties and wedding invitations where they mingled blurred the personal, professional and political, not to mention the individual and the institutional, to reveal a network of associations so deeply interwoven that now one part has frayed the whole thing is beginning to unravel.

These people behaved not just as individuals but as a class. And when that class came under attack it bandied together to protect itself.

These resignations and arrests feel like a dam breaking because the evidence has been both known and suppressed for so long. The new-found bravery of the British political class in the face of a media mogul is gratifying but hardly impressive. Having licked Rupert Murdoch's boots for the best part of three decades their sudden discovery that it leaves a nasty taste in their mouth is unconvincing.

It should not be forgotten that it took the hacked phone of a murdered girl to get us to this point. Apparently nothing less would stir sufficient public outrage or political retribution.

And if the police and News International had their way we would still be none the wiser.

Logically this cannot hold. Although given how long it's taken us to get to this point, it can drag on. Like all major scandals the cover-up may yet prove more devastating than the crime itself. And that is saying something.