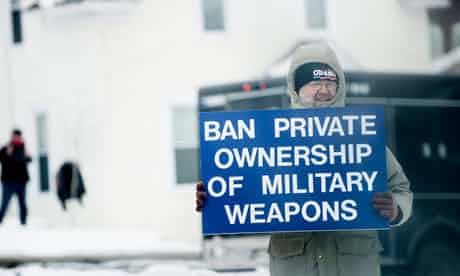 On 27 January CBS aired an interview with the newly inaugurated President Barack Obama and his outgoing secretary of state, Hillary Clinton, during which the president faced accusations that under his watch America had retreated from its key role in world affairs. "The biggest criticism of this team," said the interviewer," has been [that there is] an abdication of the United States on the world stage, sort of reluctance to become involved in another entanglement."

Obama interrupted. "Well, Muammar Gaddafi probably does not agree with that assessment," he said. "Or at least if he was around, he wouldn't agree with that assessment." Quite. Gaddafi, to whom the US authorised $15m worth of arms sales in 2009, is not around because he was murdered by a mob shortly after being sodomised by a bayonet following his ousting by US-led Nato bombardment. In the minutes between the sodomising and the summary execution there just wasn't time to reflect on US foreign policy.

The day after the interview was screened, Obama met with the Major Cities Chiefs Police Association and the Major County Sheriffs' Association. The president, fresh from boasting about having Gaddafi "smoked", wanted to discuss how to stop guns getting into the wrong hands, bolster the forces of law and order, and stem violence in US cities.

Over the last few weeks there has been a distinct incongruity – to say the least – between the agenda Obama is promoting at home and the one he defends abroad. His justification for targeted killings and drone strikes in foreign parts, prompted by his nomination of a CIA director, has coincided with his advocacy for stiffer gun control and appeals to respect human life following mass shootings. The result is an administration raising life and death issues in its actions and pronouncements but being unable to talk with any moral authority or ethical consistency on either.

In short, the credibility of a president in challenging lawless social violence in US cities is fundamentally undermined when he has his own personal kill list in violation of international law to terminate enemies elsewhere.

"The diplomatic historian traces foreign affairs as if domestic affairs were offstage disturbances," writes Walter Karp in his book The Politics of War. "The historian of domestic politics treats the explosions of war as if they were offstage disturbances. Were that true, we would have to believe that presidents who faced a mounting sea of troubles at home have nonetheless conducted their foreign policy without the slightest regard for those troubles – that individual presidents were divided into watertight compartments, one labelled 'domestic' and the other 'foreign'."

Yet that is precisely how the Obama administration appears to have compartmentalised its response to violence and its victims. One moment the Obamas are mourning the tragic loss of Hadiya Pendleton, the 15-year-old girl who attended his inauguration. She was shot less than a mile from their Chicago home while sheltering from the rain in a park. The first lady, Michelle Obama, who attended Hadiya's funeral on Saturday, said, through a spokeswoman: "Too many times, we've seen young people struck down with so much of their lives ahead of them."

The next, his administration is maintaining a stony silence over the murder of Abdulrahman al-Awlaki, the 16-year-old American born in Denver who was killed by a drone in Yemen in 2011. His father, Anwar (also American), was an Islamist cleric – killed by a drone a few weeks earlier. When asked about the incident during the election campaign, Robert Gibbs, former White House press secretary and senior adviser to Obama's re-election campaign, essentially blamed Abdulrahman for having the kind of dad the US wanted to kill. "I would suggest that you should have a far more responsible father if they are truly concerned about the wellbeing of their children."

On the one hand, we should not be surprised. These contradictions are inherent in the tension between the position to which he was elected and the forces that elected him. For all the global investment in Obama – peaking early, stratospherically and ridiculously, in the Nobel peace prize just nine months after he was voted in – he was elected to represent the interests of the most powerful and well-armed nation on Earth at a time of war. Murder was in the job description of the office he applied for and won to great fanfare. For all the claims of him becoming a great role model for young black men, he was always going to be responsible for the deaths of more innocents than Biggie and Tupac combined.

But Obama was returned to office by the votes of – among others – blacks, Latinos, youth and the poor, the very people and communities most likely to be blighted by gun violence. Michelle Obama came to Hadiya's funeral after considerable pressure had been applied by black communities in Chicago and nationwide. Since the shootings of children at Sandy Hook elementary school Obama has led an audacious push to galvanise a majority, in the country and in Congress, for tougher gun controls.

The unfortunate timing has highlighted the discrepancy between his foreign and domestic policies, exposing them not only as hypocritical but deeply tragic. While shop windows all around Obama's Chicago home hang posters saying "Stop killing people", the man they sent to the White House is doing precisely the opposite. Having shown his ability to rally human empathy to progressive causes at home, he then fails to recognise the common humanity of the innocents he is killing abroad.

"[America can be] a moral power," said Martin Luther King – on whose Bible Obama swore in as president – during the Vietnam war. "A power harnessed to the service of peace and human beings, not an inhumane power unleashed against defenceless people." That's as true on the streets of Chicago as it is in the border regions of Pakistan.