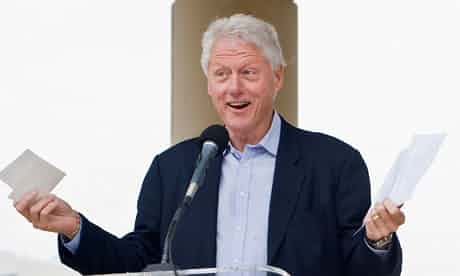 In a blistering attack on the Republican right, Clinton told the audience of several thousand: "If this divide and conquer crowd [had] been in control there'd never have been a United States constitution … This election is about you and your children but it's also about America."

Branding Walker both divisive and ineffective, Clinton argued that only "creative co-operation" between "everyone who has a stake in the game" could remedy the state's problems. "You get out of a ditch when people stand on each others' shoulders and the person at the top starts pulling people out," he said.

The election, taking place in a swing state on a key electoral issue of who should shoulder the pain for balancing a budget deficit, has taken on huge national significance.

Walker has had many surrogates come to Wisconsin, including Louisiana governor Bobby Jindal and, later today, South Carolina governor Nikki Haley, who has touted herself as a "union buster". Clinton is the most high profile Democrat to come to Wisconsin to support the recall campaign so far in a tight race where voter turnout will be key. His visit coincided with the last day of early voting, which Democrats claim has seen a significant turnout of their supporters.

Some Democrats here have criticized Barack Obama for not being more involved in the campaign. Conor Williams, who was at the rally, said he thought the president had been right to stay away. "I think it's been a negative for Walker that so much of his money has come from outside the state. So I'm fine with Obama staying away. Had he come I think he might have energized Walker's people because he makes a lot of them go really crazy."

It was an energized crowd, that sang along to Hit the Road, Scott to the tune of Hit the Road, Jack and waved banners – many homemade – with slogans such as: "Take the Con out of Wisconsin" and "Stop the War on Workers," while people with clipboards tried to recruit volunteers for the weekend.

Most polls show Walker leading his Democratic opponent, Milwaukee mayor Tom Barrett. He has even managed to maintain a significant toe-hold – of about 38% – among union voters. But Barrett supporters insist they have a better get out the vote organization and are gaining momentum. Democrat-commissioned polls point to a dead heat.

When asked what a Walker victory would mean for the state, Angela Walker, a transport worker and Amalgamated Transit Union activist, said: "I'm not even thinking along those lines because it's not going to happen. We are driving people to the polls from all over the city. We're confident and we're excited."

Walker, who was elected in 2010 with the support of the Tea Party, shot to prominence early last year when he sought to outlaw collective bargaining for public sector unions and introduce swinging cuts to government programs as part of his plan to balance the budget. The proposals brought tens of thousands of protesters to the streets of throughout the state and the country and prompted a grass roots effort to recall him.

The final debate last night between Walker and Barrett ended in a bad tempered draw, with Walker claiming Barrett was weak on crime while Walker hammered Barrett on the criminal charges against three former Walker aides, a campaign donor and a political appointee.

"I have a police department that arrests felons. He has a practice of hiring them," Barrett said in one of the night's most memorable lines.

Williams said he came to the rally because he wanted to support "a more reasonable governance in Wisconsin".

"There's an element of extremism associated with Scott Walker that's worrying," he said. "There are already a lot of divisions in Wisconsin. But if he wins it'll show that we're more divided than we thought."

Clinton has, in the past, opposed the very principle of a recall. In 2003 when California's Democratic governor, Gray Davis, was recalled and replaced by Arnold Schwarzenegger (one of just two successful recalls in US history) he said:

[Recalling the governor] will create a circumstance where nobody ever makes a hard decision again … I don't want you to become a laughingstock, a carnival or the beginning of a circus in America where we just throw people out whenever they make a tough decision … [A recall] would spread instability and uncertainty among your people and across the country."

Yesterday he insisted the situation in Wisconsin under Walker would become so dire that recall was the last best option. "Ordinarily I'm against recall elections," he said. "But sometimes it's the only way to avoid a disastrous course … It's not the road back, it's the road to a dead end."

Walker, he said, was preying on the electorate's insecurities. "When people get uncertain and afraid they get confused and divided."

One activist, Wilma, said she had been phone banking or canvassing every day since the campaign began some months ago. Quoting James 2:14 from the bible she said: "'Faith without works is dead'. We've still got work to do."

follow on twitter
RT @MCRSociology: Gary Younge discusses identity politics and America with Will Hutton in this episode of @thewesocietypod https://t.co/72…
RT @mart_welton: Congratulations to all those getting their A-level results today. If you have BBB at A-level or above you can still apply…
RT @BernardineEvari: Please follow the groundbreaking online #MuseumofColour UK, founded by the unstoppable Samenua Sesher. The 1st gallery…
RT @EthnicityUK: Gary Younge is interviewed by @sonikkalogan about his work on racism and gun violence in @the_hindu #DataPoint podcast. h…
RT @thefreedomi: 🚨 NEW: Saudi women’s rights activist & academic Salma al-Shehab was sentenced to 34 years in prison + 34 year travel ban f…
RT @LRB: #DawnFosterForever! On Thursday 15 September at the @LRBbookshop, @BizK1, @piercepenniless, Lynsey Hanley and @garyyounge will d…
RT @ShowunmiV: This is how we support Black women and girls https://t.co/8YmgV21zHo
RT @sonikkalogan: It's #DataPoint Pod Thursday! In this week's episode, I talk to @noraneus, @garyyounge and @Casey_J_Wooten about the U.S.…
RT @bgnoiseuk: Next month, @LRBbookshop will host an event to celebrate the life and work of Dawn Foster with @BizK1, @piercepenniless, Lyn…
Help me Twitter. The quote: ""You can cut all the flowers but you cannot keep Spring from coming." is most commonly… https://t.co/Xs7JkiOEd5
© Gary Younge. All Rights reserved, site built with tlc
Buy amaryl online Can i buy singulair online What do i need to buy lotrisone Where to get aldara creamaldara for sale How to get protopic Where can you get adalat Best place to buy motegrity Cheap pentasa pills Buy generic celexa Mirapex online without prescription