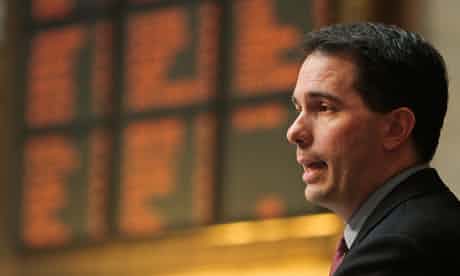 "There are no second acts in American lives," F Scott Fitzgerald once famously wrote. But once in a while in American elections there is the opportunity for a do-over.

In November 2010, as the right wing nationally delivered a "shellacking" to president Barack Obama, Scott Walker, a tea-party-supported Republican defeated Tom Barrett for the Wisconsin governorship by 52% to 47%.

Walker was supposed to enjoy a four-year term. But after less than a year, many Democrats and union members decided they had had enough and collected thousands of petitions calling for him to be recalled. On Tuesday he will face Barrett again.

"I don't think people knew what they were getting when they voted for him," says Sue Altenbach who is campaigning in the small town of Racine to oust Walker. "Back then the economy was still bad, and people were upset that Obama had not come in and performed a miracle."

So now they get a second chance in a race with ramifications that go way beyond Wisconsin. In a presidential election year, the recall has become a national metaphor for the durability of the Republican revival, the potency of union mobilisation and the presidential race itself.

Wisconsin is a state that is always competitive but rarely actually swings. Democrats have won it for the last five presidential elections – but rarely by much. Only in 2008 did they get more than 50% of the vote. But this time polls show Mitt Romney gaining ground, making Wisconsin one of the few states John Kerry won in 2004 but where Obama is now vulnerable.

Evan Bradtke, 20, who is supporting Walker, told the Washington Post it is

"the second most important election this year … When governor Walker wins re-election … it's going to send a message that Wisconsin voters support a fiscally responsible agenda … And that's going to be Governor Romney's message."

That is precisely what national Democrats were worried about. They were not keen on the recall effort, believing it carried great risk, exhausted resources and, if Walker won, would leave a once-weakened governor emboldened.

But they couldn't have stopped it even if they tried. The drive to oust Walker was driven by local activists and national unions hoping a victory could set an example to other right-wing governors.

"If Walker wins this then I think our state will go Republican in November," explains Altenbach. "It will give them a big lift."

But first and foremost it poses a major test for Wisconsinites.

The state is no stranger to cranky conservatives. It was home to the red-baiting senator of the 1950s, Joseph McCarthy, and the segregationist Alabama governor, George Wallace, got more than a third of the Democratic vote here during the 1964 primary against Lyndon Johnson. But some say Walker lacks the populist touch and the independence to claim that tradition.

"I think this election will be an indication of what Wisconsin is politically," explains the state representative for Racine, Cory Mason. "We're a state with a progressive tradition that likes mavericks and strong independent leaders on both sides. Now we know what Scott Walker will do, to leave him would represent a radical departure from what we have had in the past. It will feel a lot more like Indiana and a lot less like Iowa or Minnesota, which is how a lot of us imagined ourselves."

The source of their discontent was not difficult to fathom. Walker had barely been in office for a few months when he pledged to remove collective bargaining rights from public sector unions and cut local government workers' health benefits and pension entitlements. Walker said the changes were necessary to balance the state's budget and to make its labour market more competitive.

The effect was incendiary. Tens of thousands of protesters flooded to the state capitol in Madison, presaging the occupy wall street movement that would happen much later in the year. In all 50 states, rallies were held to support Wisconsin unions. There was also chaos. For the measures to pass, a certain number of local senators had to be present in the chamber for the vote. To prevent that happening, the entire Democratic delegation fled the state and refused to return for several weeks until Walker agreed to negotiate.

The law eventually passed, deepening the rancour and sparking the recall efforts. For a long time Walker's prospects did not seem bright. The recall campaign collected almost as many signatures as Barrett got votes. Last November in Ohio, unions mobilized a massive effort to successfully overturn similar legislation introduced by a similarly combative new governor in a ballot by 62% to 38%. Wisconsin was next.

But a recall election is of a different order. While 19 states allow voters to recall their governors, only two governors have ever been successfully recalled: Lynne Frazier of North Dakota in 1921, in a dispute about state-owned industries, and Gray Davis of California because of his handling of the state budget in 2003.

Walker is determined not to be the third. He has outspent his opponents, mostly with money from outside the state. His efforts seem to be working. The most recent poll has him ahead by seven points and in the last five he has lead by between four and 12 points. But recall supporters argue that given the unprecedented nature of the race, polls are unpredictable. They genuinely believe they can eke out a victory in a race where there are few waverers and the task is to get out the vote. "We believe we have the numbers. We just need to make sure that everyone on our side votes," says John Lehmann, who is running in a local recall election as Racine Democrats also try to oust their state senator.

The race will be decided in places such as Racine, a small town on the banks of lake Michigan that has seen better times but not down at heel. When Mason graduated from high school 20 years ago, 85% of the jobs here were in manufacturing – today it's 25%.

It is rare that anyone wins the governership without Racine county, which went marginally for Obama in 2012 after delivering similarly slim victories for Bush in 2008 and 2004. The town is Democratic, and much of the rest – particularly west of interstate 94 – is Republican. Democrats generally aim to rack up huge numbers in the town and then hope they don't get slaughtered elsewhere.

Here, recall campaigners refer to an intensity on the door step they have not witnessed for some time and point to another recent poll by Celinda Lake – a reputable Democratic pollster – that put Barrett and Walker in a tie with independents breaking for Barrett. "We knew why we lost in 2010, and the loss was not a surprise. Two weeks ago I was getting really nervous," says Mason. "But when I meet people now I feel there was as much of a sense of urgency and real intensity as I've ever seen."

Walker has proved himself to be an extremely polarizing figure. At the height of the demonstrations he was caught on tape telling a prank caller posing as one of the Koch brothers – who bankroll many tea party groups – that he had contemplated putting agent provocateurs among the union activists. Another video shows him in conversation with a billionaire donor shortly before he presented the budget saying he intended to use a policy of "divide and conquer" to defeat the public sector unions. "Yes, Republicans love Walker, Democrats hate him," one Republican strategist told the Washington Post recently. "And the slice of voters with no opinion is certainly smaller than in any other state."

Tuesday's result will depend a little on what happens to that thin slice but far more whether Democrats are more effective in motivating those who loathe him than Republicans are in mobilizing those who love him.