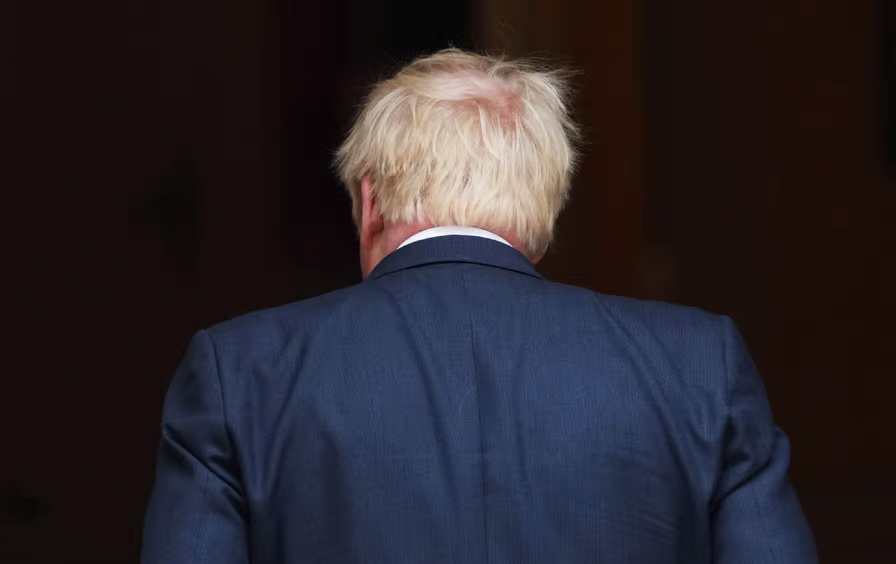 As the ethical lapses kept piling up, Boris Johnson, who studied classics at Oxford university’s Balliol College, reached for the moral code of the Iliad. “He thinks in classical terms,” one MP told the London Times. “For him there is no greater honour in resigning than being killed…. if you are going to die, go down fighting.”

It was quite a reach. Ultimately, Johnson’s end owed more to Homer Simpson than to Homer the ancient Greek author. He didn’t go down fighting but was dragged out in denial. There was no honor in his demise; he was effectively shot by his own troops in his own bunker.

As has so often been the case with Johnson, it was a potent combination of sex, booze, and lies that brought him to the brink. Last week, the Conservative deputy chief whip, Chris Pincher, resigned after he admitted “[drinking] far too much” at a private club and “embarrass[ing himself] and other people.” It was alleged that he had groped two men. This was not the first time Pincher had been accused of sexual misconduct. Johnson insisted for several days that he was not aware of Pincher’s past, even as it emerged that he had nicknamed him “Pincher by name, pincher by nature.” When a retired civil servant issued a public letter on July 5 saying he had personally briefed Johnson about Pincher’s behavior a few years earlier, the dam broke. After Partygate, two dramatic special election defeats, and the resignation of his ethics adviser, this was one lie too many. Two senior ministers—the chancellor and the health secretary—resigned, citing a lack of integrity and competence. A mass desertion followed. Sixteen ministers walked in the same day. One of the dwindling band of Johnson loyalists was interrupted on the radio three times by news of new resignations even as he made the case for Johnson to stay.

The recent indignation at Johnson’s behavior must be understood as a matter of politics, rather than principle. His contempt for the truth, narcissistic behavior, and utter disregard for convention were not only not new: These were his calling cards. “When people show you who they are the first time,” Maya Angelou once said, “believe them.” Johnson had showed us again and again and again. It was only when he became a clear political and electoral liability that these blatant faults became a problem for his Tory colleagues.

Johnson then telephoned those who had not resigned, one by one, as Thatcher had done, believing that they would be less likely to refuse him individually than as a group. These were the people who were closest to him, both politically and personally. And as was the case with Thatcher, even individually most of them told him he should go. Still, he refused to budge.

When he called MPs to offer them the jobs vacated by those who’d just resigned, they wouldn’t take them up. No rat in their right mind joins a sinking ship. Ministers he had only appointed the day before resigned. One minister, who had Covid and couldn’t keep up with events, actually resigned after Johnson had himself announced his resignation. But like a cartoon character who can keep running off a cliff so long as they don’t look down, Johnson’s obstinacy was time-limited. By the time he finally resigned, he had not run out of road but had finally run into reality.

Earlier on the day the resignations started, Keir Starmer, leader of the opposition Labour Party, had attempted to draw a line under Brexit. The UK “will not go back into the EU” under a Labour government, he said, claiming that if elected his task would be “to make Brexit work.”

Yet in Johnson’s departure we are seeing the unravelling of Brexit’s legacy in Britain’s political culture. Its diplomatic and economic ramifications continue to make deep and lasting impressions. Six years after the referendum victory he fought for, Johnson’s resignation represents the beginning of the end of its impact on domestic politics.

Johnson’s political ascent was a product of the 2016 referendum to leave the European Union. At the time, most Tory MPs wanted to remain in the EU. David Cameron resigned as MP after the country voted to leave. His successor, Theresa May, who also supported remaining, kept a balance of Remainers and Leavers in her cabinet. May was forced to resign after she could not assemble a Commons majority for her Brexit plan. The party—and therefore the country—was left to the rump that had backed leaving, with Johnson at its helm. It was primarily, though not exclusively, because of his promise to “get Brexit done” that he won such a thumping majority over Jeremy Corbyn and the Labour Party in 2019.

Now that Brexit has not just “been done” but is accepted as a fact of political life by enough of the polity, it will, in time, cease to be such a defining factor in British politics. The 2019 election delivered a decisive electoral victory—but not an ideological one—and whatever headway the Tories might have made politically was interrupted by the pandemic. Since then, necessity has forced a huge increase in public spending, tax hikes, and a far more substantial windfall tax on energy companies than Labour had dared propose. It has a huge majority but no coherent agenda.

With no good reason for the Brexit wing of the Conservative Party—which had neither the most experienced nor the most competent parliamentarians in it—to hold sway any longer, and without Johnson’s imposing personality looming in quite the same way, we are likely to see a significant realignment within the party.

What comes next is uncertain. The situation is volatile and fluid. Inflation is high, growth has stalled, and we have a summer of strike action ahead of us. Labour is calling for a general election, but with Johnson gone and the public still not keen on Starmer, there is no reason to believe Labour would win an election in the highly unlikely event that one were called this year. Instead, in the coming months the more significant opposition will mostly come from outside Parliament.

At the time of writing, the question of exactly when Johnson will leave remains open. He initially said he wants to stay on until a new party leader can be chosen in the fall, which was how Cameron and May left. But they left with some dignity; Johnson leaves with his fingernails on the spotlight.

Johnson’s resignation statement was characteristically graceless. Blaming the “herd instinct” in Westminster, he said changing leader at this stage was “eccentric” but “when the herd moves, it moves.” The immediate response from Tories to his request was incredibly frosty, suggesting the trauma he inflicted by overstaying his welcome will not be forgiven soon.

Who might replace Johnson is also very much an open question. The Tory party has lost its center of gravity. Foreign Secretary Liz Truss is often touted, and former defense secretary Penny Mourdant and former chancellor Rishi Sunak (whose resignation earlier this week triggered the final stage of this crisis) have both been mentioned. But Johnson was such an outsize personality that few of his cabinet members have much of a personal following within the party; most couldn’t be picked out of a lineup by the general public.

What is certain is that Johnson’s successor will be a Tory, whose government will continue to favor the rich and screw the poor. “Kings were put to death long before 21 January 1793,” wrote Albert Camus, referring to Louis XVI’s execution after the French revolution. “But regicides of earlier times and their followers were interested in attacking the person, not principle, of the king. They wanted another king, and that was all.” The change of personnel in Downing Street is welcome, but it is a change in policies that we need.

follow on twitter
RT @Nadine_Writes: Inquest into police shooting of Chris Kaba due to open and adjourn. https://t.co/ASoionadUY
RT @GoldsmithsUCU: 📢THURS 6 OCT. Calling all staff + students @GoldsmithsUoL to discuss the chaos of @FCorner's restructure, the impact of…
RT @garyyounge: Hey @KwasiKwarteng "You about to lose yo' job." https://t.co/MXMnp4mcIq
RT @LeeCamp: What stage of capitalism is this? https://t.co/MRDXMP7gnd
RT @lazebnic: Important question and some serious people to help answer it and inspire us including @jeremycorbyn, @garyyounge, Hafsa, pres…
We're hiring: Journalist - The Bristol Cable https://t.co/TwV4AmHZ1Q
RT @JamaicaLeeds: Soooo many questions @garyyounge might ask the legend that is LKJ #LintonKwesiJohnson on Oct 7 @Howard_Assembly Drop your…
Hey @KwasiKwarteng "You about to lose yo' job." https://t.co/MXMnp4mcIq
@KwasiKwarteng "You about to lose yo' job...." https://t.co/MXMnp4mcIq
RT @NewhamBookshop: Exciting news - @MarinaHyde will be in conversation with @garyyounge on 2 November at Wanstead Library. Tickets availab…
© Gary Younge. All Rights reserved, site built with tlc
Cozaar online india Where can i buy lamisil over the counter Celebrex online purchase Catapres buy Abilify and zyprexa together Buy celebrex online with free samples Cost of cialis at cvs How to get patanol prescription Buy skelaxin online with free samples Order yasmin online