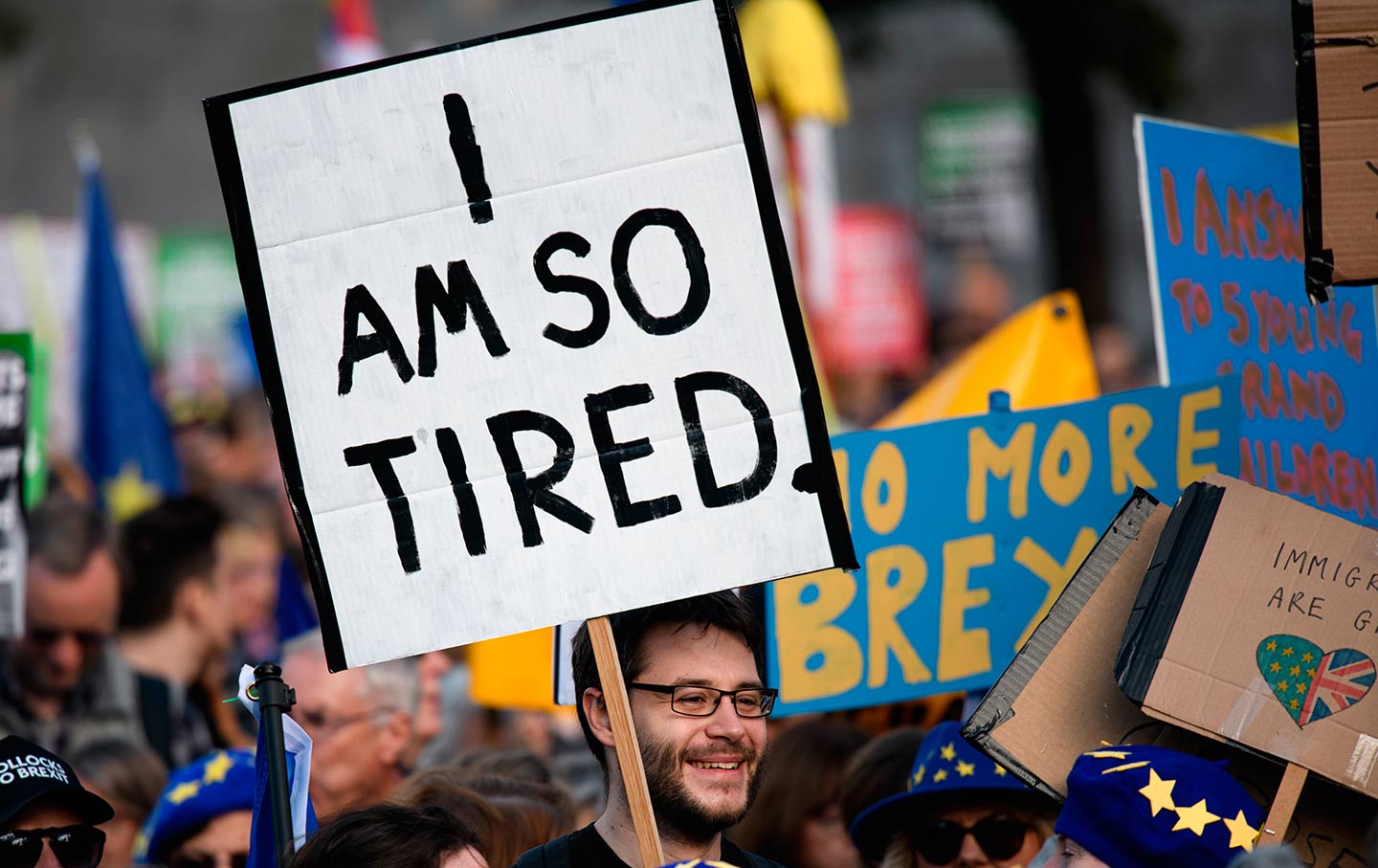 Brexit Fatigue Is No Reason to Leave the EU
The Nation,
(Justin Griffiths-Williams / AP)

There is a moment in the movie Primary Colors when presidential candidate Jack Stanton (played by John Travolta) demands that someone call his campaign manager, only to be reminded that he just threw his phone out of the car window in a tantrum. They circle back to look for the phone, which his wife, Susan (played by Emma Thompson), finds in some bushes. “Well, shit,” says Jack, “you wouldn’t have found it if I hadn’t thrown it out of the car.”

The prospect of UK Prime Minister Boris Johnson (think Donald Trump with a worse dentist but the same hairdresser) taking any credit for the Brexit deal, which has been endorsed by Parliament, is akin to Jack seeking praise for finding his phone. The jam in which the British government has found itself for the past three years was entirely of its own making. The Tories called a referendum, lost it, and have been embroiled in a rancorous process of self-impalement. So far, they have lost two leaders and their majority in Parliament.

The tortured back-and-forth between London and Brussels, MPs voting “no” on everything, internecine Conservative rivalries, Labour’s circular firing squad, arcane parliamentary procedures, threats of elections, and demands for referendums and prime ministerial resignations have left us in the UK dulled and desensitized.

The rest of Europe is bored with us. It wanted us to stay. We would not. It wanted us to come up with a coherent plan for leaving. We could not. It wanted us to at least agree on what we wanted. We did not know how. Having bent over backward to help us avoid committing significant self-harm, it is now in the process of checking out. If you must play with matches, at least do it outside the house, it seems to be saying. In his last address to the European Parliament, the outgoing president of the European Commission, Jean-Claude Juncker, called Brexit “a waste of time and energy.”

And perhaps most important, we are bored with us. It’s been three years now. There are only so many Facebook fallouts, Twitter spats, family rows, and dinner party disasters you can have about something that has not happened. Brexit has worn us out.

Ultimately, this fatigue was the decisive factor nudging Parliament toward accepting Johnson’s deal. After three years of everything being threatened and nothing actually happening, a few politicians who had resisted finally succumbed—not many, but enough to make the difference.

That’s more than a pity; it’s an abdication of responsibility. This is a terrible deal for Britain, far worse than the one offered by Theresa May and rejected by Parliament last year. Environmental, consumer, and labor protections, which under her deal would have been legally binding, will now be optional, and any possibility of having a new customs union is ruled out.

There was no great feat of brinkmanship in getting to this point. Johnson merely threw his erstwhile ally the Democratic Unionist Party under the bus, reneging on a promise he made a year earlier over the Irish border. Meanwhile, he pushed through his demand that British businesses no longer have to align themselves with EU regulations.

This tells us two things that will shape what comes next. First, in the finest tradition of austerity politics, the Tories have bought themselves out of this crisis by making working people pay. This exposes Brexit for the neoliberal race-to-the-bottom project wrapped in a Union Jack that, for its architects, it always was.

There has never been a mandate for this agenda. What the 2016 referendum delivered was a very narrow majority for leaving the European Union—under conditions undeclared and unknown. It is in that crude majoritarian vein that we now continue with Johnson’s narrow acceptance in Parliament.

A handful (19 out of 245) of Labour MPs—many from constituencies that voted to leave—backed his deal so we could, as one put it, “move on” and “get Brexit done.”

That is a mistake. The fatigue is real, but their constituents won’t thank them for curing their boredom by making them broke. Johnson, they say, has promised that even though the guarantees on workers’ rights and environmental standards have been deliberately removed, he will not go back on them.

Which brings us to the second point: Johnson is a habitual liar. There is no more polite way to say this. He was fired from his first journalism job after fabricating a quote, was fired from the Tory shadow cabinet for lying to the leader about an affair, has often professed his support for a single market that he is about to bring us out of, and has completely shafted his coalition partner the DUP. I wouldn’t trust him with a lunch order, let alone the livelihoods of working families. Nor should anyone else.

This is why even after Johnson’s deal was approved, Parliament demanded an extension so that it could read the small print. Too few, even on the Tory benches, trust a Johnson-led government. Johnson’s skill has been to make enough Brexit hard-liners fear that if they don’t accept his deal, then there will be a second referendum that they might lose. And to convince enough Remain MPs that if they don’t accept his deal, then the alternative will be no deal. On the night of the vote itself, he said that if Parliament rejected his three-day timetable, he would call an election. When they called his bluff, he said he’d go back to Brussels. We have yet to see if his ability to leverage his renown for duplicity has its limits. Those who have not been bored into submission have been lied into it.