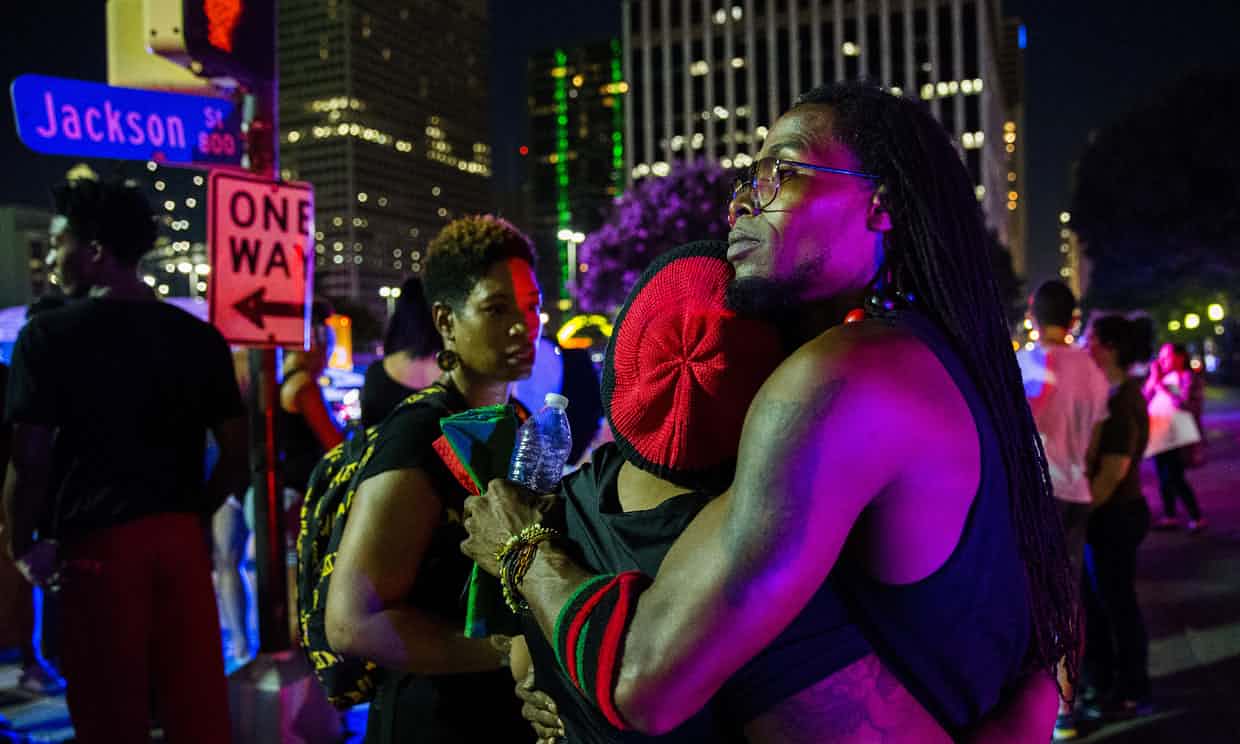 Bring the Dallas murderers to justice. And the killers of black people too
The Guardian,
Photograph: Ashley Landis/AP

In a country where it’s easier to obtain a semi-automatic gun than to obtain healthcare, a fragile mind can wreak havoc on a fragile political culture. So it was on Thursday night when a shooter opened fire on police at a Black Lives Matter demonstration killing five officers and wounding at least seven others.

Even as events in Dallas unfold there are three key things one can say. The first is that these murders are vile and should be unequivocally condemned. They can in no way be understood or excused as retaliation for the well-publicised recent incidents of police shootings of African Americans. Indeed the effect of such individual acts of violence is not to support the movement against racism but sabotage it. Its enemies will smear it by association; potential allies will be more wary; those within it will be more cautious. Those believed responsible should be found, charged and prosecuted. This is the appropriate response when people cavalierly and wantonly take the life of another. Anything less would lack justice.

Which brings us to the second point. Justice is indivisible. If it is accorded to some and not others it is not justice but privilege. That is why these horrific assassinations should in no way diminish the urgency or importance of the issue of police killings of African Americans or undermine the Black Lives Matter movement.

Dallas police have described the demonstration where these shootings occurred as “peaceful”. Since Black Lives Matter seized the popular imagination two years ago, it has had no history of making organised violent attacks on the police. Demonstrations have periodically turned into clashes with police, and even riots. But those have been spontaneous moments in collective protest – at times provoked by police themselves – none of which has lead to further fatalities. They have not been the work of an individual or small cabal whose primary intent was murder. On the question of nonviolence there is nothing one could say about Black Lives Matter that could not be said about Martin Luther King’s civil rights movement, whose detractors sought to discredit it whenever violence attached itself to its cause.

In 1968 King attended a protest in support of striking garbage workers in Memphis that turned violent and police responded with batons and teargas, shooting a 16-year-old boy dead. A column in the Dallas Morning News back then called King “the headline-hunting high priest of nonviolent violence” whose “road show” in Memphis was “like a torchbearer sprinting into a powder-house”. A week later he was dead.

Clearly there is a context. According to the Dallas police chief David Brown, before one of the suspects was killed by police: “[He] said he was upset about Black Lives Matter. He said he was upset about the recent police shootings.” That would be true of a lot of people in America – black, white and otherwise. According to a recent Pew survey, almost two-thirds of black Americans and white Democrats, and around 60% of white people under 30, express at least some support for Black Lives Matter.

Brown went on to say that the suspect “was upset at white people. The suspect said he wanted to kill white people, especially white officers.” That is true of very few people in America – black, white or otherwise.

Nonetheless, the same Pew survey did show that black and white Americans do see the racial situation very differently, with sizeable gaps in their views on how fairly black Americans are treated and how much change is necessary to rectify the situation. But context is not cause and the frailties of an individual should not be mistaken for the vulnerabilities of a movement. The suspect also told police he was “unaffiliated” to any organisation.

Black Lives Matter did not make black people upset; video footage of black people being shot dead in cold blood and broad daylight did that. Black Lives Matter was brought into existence in response to state violence; it does not have a monopoly on the grievances and pathologies that emerge as a result of that violence. It can only seek to direct the resentment in constructive ways. Given the considerable anger at the relentless exposure of police brutality, its work on that front has been commendable.

The Black Lives Matter movement is essentially demanding nothing more for citizens who are black than the people of Dallas of all races now demand for its law enforcement in blue: justice.

This horrific incident must be both mourned and understood for what it is. But it should not be allowed to distract us from the 566 people who have been shot dead by police so far this year – a disproportionate number of them black and Native American.

This week we have seen videotaped evidence of two black men being brutally slain by people who are paid to serve and protect them. Indeed, if the National Rifle Association believed its own rhetoric (it laughably claims to be the oldest “civil rights organisation in America”) it would have a key role in the Black Lives Matter coalition. If ever there was a section of the citizenry looking for ways to resist state tyranny, black America is it.

Which brings us to our final point: guns. The NRA, which campaigns for looser gun laws, is not fighting tyranny but contributing to it. When you have more guns you are likely to have more gun violence, and when guns that can kill large numbers of people easily are readily available, gun violence will claim more fatalities. America cannot simply go on astonishing itself with the magnitude of these events without addressing the obvious cause. One can only lose one’s innocence so many times before the issue becomes one not of naivety but carelessness. There are too many isolated incidents to miss the pattern. No other western country has this problem because no other western country has this number of guns.

Membership Event: Gary Younge: Another day in the death of America

“Whether they’re used in war or for keeping the peace guns are just tools,” wrote the late Chris Kyle, the former Navy Seal made globally famous by the movie American Sniper. “And like any tool, the way they’re used reflects the society they’re part of.” That’s the truth. And that’s the problem. Guns did not create these problems: guns have made them deadly.