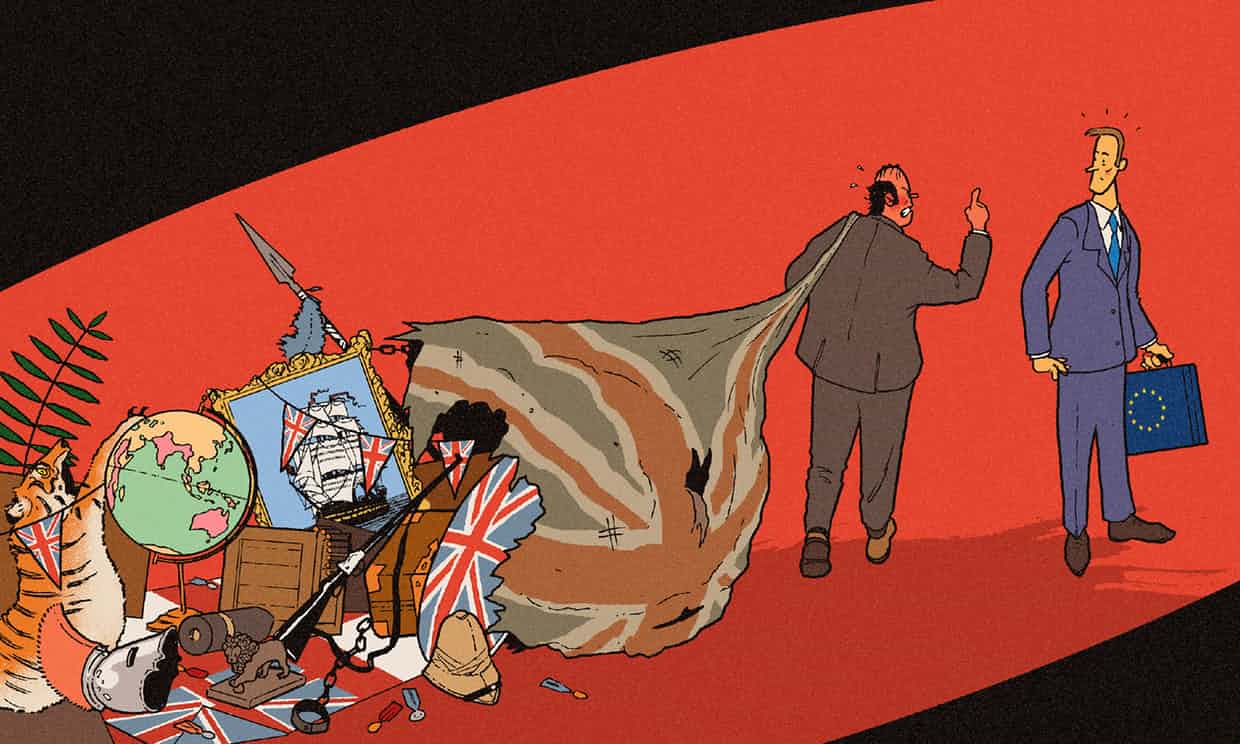 Britain’s imperial fantasies have given us Brexit
The Guardian,
Illustration by R Fresson

In his recent book Behind Diplomatic Lines, Patrick Wright, a former head of the UK diplomatic service, provides an illuminating account of Margaret Thatcher’s worldview. The former British premier wanted South Africa to be a “whites-only state”, and believed the Vietnamese boat people should be pushed into the sea before they reached Hong Kong. In addition, the late prime minister was particularly gripped by “Germanophobia”.

“She seems to be obsessed by a feeling that German-speakers are going to dominate the [European] community,” Wright writes. “Any talk of German reunification is anathema to her.” At one point it got so bad that the former foreign secretary Douglas Hurd claimed: “Cabinet now consists of three items: parliamentary affairs, home affairs and xenophobia.”

So when the outgoing German ambassador to Britain claimed this week that Brexiteers were fixated on the second world war, he was on to something. Referring to the popularity of films such as Darkest Hour and Dunkirk, Peter Ammon said: “History is always full of ambiguities and ups and downs, but if you focus only on how Britain stood alone in the [second world] war, how it stood against dominating Germany, well, it is a nice story, but does not solve any problem of today.” (If the second world war taught us anything, it was that you couldn’t stand alone. They weren’t called “the allies” for nothing.)

There were some sound reasons for voting to leave the EU – although the campaign was rarely fought on them, and wasn’t won because of them. And this nostalgia for a particular, and peculiar, version of our history long preceded Brexit. Remarking on the chant “Two world wars and one World Cup” that rang out whenever England played Germany at football, academic Paul Gilroy wrote, in After Empire: “The boast to which the phrase gives voice is integral to a larger denial. It declares nothing significant changed during the course of Britain’s downwardly mobile 20th century … We are being required to admit that the nations which triumphed in 1918 and 1945 live on somewhere unseen, but palpable.”

But Ammon was only half right. For while the Brexit vote was certainly underpinned by a melancholic longing for a glorious past, the era it sought to relive was less the second world war than the longer, less distinguished or openly celebrated period of empire. For if memories of the war made some feel more defiant, recollections of empire made them deluded. Our colonial past, and the inability to come to terms with its demise, gave many the impression that we are far bigger, stronger and more influential than we really are. At some point they convinced themselves that the reason we are at the centre of most world maps is because the Earth revolves around us, not because it was us who drew the maps.

It was through this distorted lens (“Let’s put the Great back in Great Britain”) that a majority voted to leave. Ammon puts the fantasies down to war stories from Brexiteers’ childhoods. “Obviously every state is defined by its history, and some define themselves by what their father did in the war, and it gives them great personal pride.” But British history didn’t stop after the war. Empire was more recent and, for a considerable element of the Brexiteers’ campaign, more personal.

Douglas Carswell, the sole Ukip MP during the referendum, was raised in Uganda; Arron Banks, who bankrolled Ukip and the xenophobic Leave.EU campaign, spent his childhood in South Africa, where his father ran sugar estates, as well as in Kenya, Ghana and Somalia; Henry Bolton, the current head of Ukip, was born and raised partly in Kenya; Robert Oxley, head of media for Vote Leave, has strong family ties to Zimbabwe. One can only speculate about how much impact these formative years had on their political outlook, (Carswell attributes his libertarianism to Idi Amin’s “arbitrary rule”) but it would be odd to conclude they didn’t have any.

But if echoes of empire reverberated through the campaign, they have also framed our negotiating strategy. The past 18 months have illustrated the journey from hubris to humiliation. For a couple of generations, we have seen our attributes and others’ weaknesses through the wrong side of a magnifying glass; now our diminished state is becoming fully apparent, and, like Boris Johnson, the foreign secretary, reciting Kipling in Myanmar, we are struggling to adjust.

This awakening would be funny (abroad they find it hilarious) if it were not so consequential. Johnson told the Commons the EU27 could “go whistle” for an extortionate Brexit bill. They whistled; now we will cough, to the tune of £35-40bn.

During her 2017 election campaign, Theresa May, channelling her inner Thatcher, boasted about being a “bloody difficult woman”. “The next man to find that out will be Jean-Claude Juncker,” she claimed. In fact Juncker, the president of the European commission, and his team have found May more overwhelmed and befuddled than overwhelming and belligerent. After one Downing Street dinner, European negotiators concluded that she “does not live on planet Mars but rather in a galaxy very far away”.

In a recent private meeting between May and the German chancellor, Angela Merkel, the two leaders reportedly found themselves in a tragicomic conversational loop. May kept telling Merkel: “Make me an offer.” To which Merkel would reply: “But you’re leaving – we don’t have to make you an offer. Come on, what do you want?” To which May would retort: “Make me an offer.”

A change of leader won’t make this right. Lacking authority and coherence, haemorrhaging relevance and credibility, May is a faithful reflection not only of her government but of the country at this moment. Brexiteers have ostensibly got what they want: Brexit. They assumed we could dictate the terms; we can’t. They assumed we could just walk away; we can’t. They had no more plans for leaving than a dog chasing a car has to drive it. They are now finding out how little sovereignty means for a country the size of Britain in a neoliberal globalised economy beyond blue passports (which we could have had anyway). What we need isn’t a change of leader but a change of direction.

May is no more personally to blame for the mess we are in with Europe than Anthony Eden was for the mess with the 1956 Suez crisis – which provides a more salient parallel for Britain than the second world war. It took Britain and France overplaying their hand, in punishing Egypt for seizing the Suez canal from colonial control and nationalising it, to realise their imperial influence had been eclipsed by the US and was now in decline.

“France and England will never be powers comparable to the United States,” the West German chancellor at the time, Konrad Adenauer, told the French foreign minister. “Not Germany either. There remains to them only one way of playing a decisive role in the world: that is to unite Europe … We have no time to waste; Europe will be your revenge.”

Once again, Britain has overplayed its hand. Preferring to live in the past rather than learn from it, we find ourselves diminished in the present and clueless about the future.