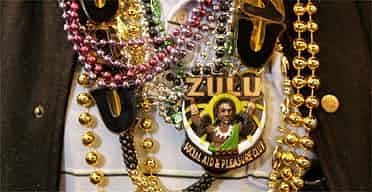 And so on Tuesday Ike and Cherlyn Wheeler will don their robes and parade down the streets of the Crescent City as King and Queen Zulu to keep a tradition alive. As the leaders of one of the many social clubs, known as Krewes, that organise Mardi Gras they will march ahead of the Ambassador, Province Prince, Mr Big Stuff, Big Shot, the Governor and the rest of Zululand's royal court. With a "lard can" for a crown and a "banana stalk" for a sceptre the King will promenade through the city centre, mocking the New Orleans white establishment. Behind him his court will throw beads, sweets, toys and trinkets to cheering crowds as they have done almost every year for close to a century.

But this year is not like the others. With Hurricane Katrina's stain still ingrained on the city, this Mardi Gras is as much about resilience as it is about rejoicing. The Zulus lost several members and some of their floats during the hurricane. As the most established black Krewe, many of its members were concentrated in parts of the city hardest hit. They are still not sure whether they will be able to return to their homes.

Some argued it would be indecent to stage such a bacchanalian event so soon after such a tragedy. A former Zulu King, David Belfield, filed a suit in Orleans parish in December to try to get the parade stopped. "I have never missed a Mardi Gras in my life," he told the Atlanta Journal and Constitution. "I love Mardi Gras." Yet Mr Belfield, who moved to Lawrenceville after his home was destroyed, branded the decision to hold the festivities "shameful".

But when the present king, Mr Wheeler, polled the new diaspora that was once his kingdom, the message came back loud and clear to go on with the event. "The consensus was 'How can we have Mardi Gras without the Zulu?'"

And so over the past two weeks the show has gone on and, in accordance with New Orleans credo, the city fathers have decided to let the good times roll. "Welcome, Mardi Gras Revellers," reads a banner on Canal Street. "New Orleans' business is tourism and we are ready to get back to business."

"If we're serious about rebuilding the city then we had to have Mardi Gras," said Steven Homes, who returned from Houston to his home town to cheer on the floats on St Charles Avenue. "New Orleans without Mardi Gras is like Times Square at new year without the clock ticking. What kind of message would it send if we didn't hold the event we're most famous for? It doesn't mean everything's back to normal. It just means we're getting back on our feet."

Over the past 150 years Mardi Gras has been cancelled only a handful of times - during the civil war, the two world wars and a police strike in 1979. It started as a pageant for the city's white wealthy elite to celebrate Fat Tuesday, the last chance to eat rich food and make merry before the austerity of Lent. But over the years it became more inclusive and popular, and it has been the city's main tourist attraction for several years.

The hurricane and its aftermath nonetheless helped to shape the theme of this year's carnival. The Krewe de Vieux parade as the Mardi Gras season kicked off two weeks ago was called "C'est Levee" - a play on C'est la vie. One of the floats called on the French to buy back Louisiana, suggesting that the city's residents might have been treated better by a different government.

During last weekend's parades Humpty Dumpty sat on one of the Sparta Krewe's floats, which bore the banner: "Levee Protection: A Real Fairy Tale." The float before carried images of the Eiffel tower, the leaning tower of Pisa and scenes of tropical bliss with the words: "Mandatory evacuation: the places we should have gone."

In the tourist shops in the French Quarter T-shirts portray the city's mayor, Ray Nagin, as Willy Wonka with the words: "Willy Nagin's Chocolate Factory; semi-sweet and a little nutty." And all this as hearings in Washington once again detail the failures of federal government during the city's time of need.

"What else can we do but laugh," said Carrie Thomas, as she waited for the parade. "It's all deadly serious but it doesn't do any harm to poke fun at these clowns every once in a while."

Stephen Perry, president of the New Orleans Metropolitan Convention and Visitors Bureau, described this year's Mardi Gras as the "launch pad" to recovery. But the celebrations are an indication of just how steep the challenges are. At the beginning of this month less than two thirds of the city's hotel rooms were usable and more than half of those were occupied by evacuees and rescue workers. Roughly a third of the restaurants are open.

With its coffers empty, the city tried to get corporate sponsorship for the event for the first time in its history to help cover the estimated $2.7m (about £1.5m) it costs to police it. But there were no takers apart from the bin bag manufacturer GLAD, whose donations covered only a fraction of that. The crowds have been thin, the parades much shorter. The Mask Factory on Decatur said business had been slow: "You can't compare it to last year or any other year. People are coming back slowly. We're not selling much. But it's a different city now."

In some areas it is barely a city at all. In the ninth ward, the predominantly black area hardest hit, scenes of utter devastation abound. Fridges, furniture and cookers line the streets. Homes are turned inside out, lives turned upside down. Cars are abandoned where they floated, and houses carry red markings left by the rescue workers, with the occasional letters DOA: "dead on arrival".

All this is a far cry from Bourbon Street in the French quarter, where Dwight from Phoenix could not remember how many mango daiquiris he had had. "We came here to party, man," he said. "Just party and have a good time."

If there is tension at this year's Mardi Gras it is less between black and white or rich and poor and more between locals and tourists. Scenes of women bearing their breasts and frat boys being rowdy sit uneasily with demands for more state help to rebuild this battered city.

One local group put out flyers explaining the etiquette that goes with the event. "Prior to Katrina, we really didn't care how the rest of the world thought of us," Jeff Anding, director of convention marketing for the visitors bureau, told the Times Picayune. "But it has become a practical problem - the perception of New Orleans."