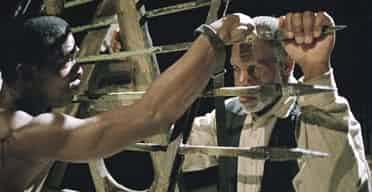 Liberty? No thanks
The Guardian

On June 19 1865, two months after the end of the American civil war, Union General Gordon Granger rode into Galveston, Texas with 200 troops to find that some people had not heard the news that slavery had ended. The last 250,000 slaves in the country still worked under bondage, unaware that they were supposed to have been liberated until Granger set them right, and free, with General Order Number 3. The slaves didn't know which day it was, so they called it Juneteenth - an official state holiday in Texas and increasingly a national African-American holiday.

Roughly 70 years later, an idealistic young white woman passing through Alabama runs across a plantation called Manderlay that General Granger clearly never found. A place, in the midst of the 1930s Depression, where the slaves still do not know that they are free. This is the premise for Lars von Trier's latest film Manderlay - the second instalment of his trilogy USA: Land of Opportunities.

In the first, Dogville, Grace - the sheltered daughter of a gangster, played by Nicole Kidman - arrives in a hamlet in Colorado having run away from her father. The local people are at first suspicious, then warm and finally exploitative. Grace's father returns with his posse. Grace decides to go with him and orders all the inhabitants of Dogville to be slaughtered. In Manderlay, we meet a more defiant Grace (now played by Bryce Dallas Howard), who intervenes after seeing a black man being whipped. Learning that Manderlay's residents still live in slavery, she declares their freedom after a brief, terse conversation with the dying Ma'am of the plantation, played by an unrecognisable Lauren Bacall. But rather than the celebration Granger encountered at Galveston, Grace is met only with bewilderment and indifference for her efforts at Manderlay.

Over the next two hours - though it feels much longer - Grace tries to impose her will on Manderlay, turning it into a democratic commune where work is shared evenly, the inhabitants vote on the correct time and learn to abide by the majority decision. The moral trajectory is almost exactly the same as Dogville. Grace's success is patchy initially - she can't tell black people apart and the crop is planted late. Then things pick up - the crop does well, decisions are made and chores get done. Then they degenerate - the inhabitants of Manderlay vote to execute one of their own, Wilma (Mona Hammond), for stealing food from a dying child, the crop money is stolen and, as a final indignity, the slaves vote to remain in slavery.

Performed in a Brechtian style - an open sparse set where walls are depicted through lines on the floor and what little action there is is mostly mimed - there is little to distract you from the film's many themes. There is the plight of the white liberal, unsure how best to employ the privilege inherited through her race; the question of what to do when people democratically decide to make decisions that are bad or even barbaric; the fetishisation of black male sexuality as Grace covets Timothy (Isaach De Bankole); and the issue of whether good ends can be pursued by nefarious means as the gangsters help enforce democratic order at gunpoint.

But the primary issue, more than 143 years after the Emancipation declaration, is whether the United States are yet ready to deal fairly and equitably with free black people. "No African came in freedom to the shores of the new world," wrote the 19th-century French intellectual Alexis de Tocqueville in his landmark book Democracy in America. "The Negro transmits to his descendants at birth the external mark of his ignominy. The law can abolish servitude, but only God can obliterate its traces." "The Negroes are American," wrote CLR James, the Trinidadian activist and intellectual in his book American Civilisation back in the 1940s. "There never was a minority which was so much flesh of the flesh and blood of the blood of the majority. In language, religion, social culture, education, training, perspectives, the Negroes are Americans and nothing but Americans."

Yet the experience of slavery and segregation has clearly compromised and undermined their sense of national affinity. Black Americans continue to feel, in some sense, that they belong to a nation within a nation. They have their own anthem, "Lift every voice and sing"; and their own flag - red, black and green.

To be at one and the same time so deeply embedded in American life and yet so violently excluded from so many elements of it gave rise to what the most prominent black intellectual at the turn of the 20th century, WEB Dubois, termed "double-consciousness". "This sense of always looking at one's self through the eyes of others, of measuring one's soul by the tape of a world that looks on in amused contempt and pity. One ever feels his twoness - an American, a Negro; two warring souls, two thoughts, two unreconciled strivings; two warring ideals in one dark body, whose dogged strength alone keeps it from being torn asunder."

The legal impediments to black advancement have gone, but the consequences of those relatively recent barriers, of course, still exist. Slavery is the most stark reminder that there has never been a meritocracy in the US and that both privilege and discrimination have been passed down through the generations - anathema to the American dream. The country, devoted as it is to eternal progress, has a tougher job dealing with the legacy of both slavery and segregation than it does dismissing the descendants of those eras.

Von Trier's conclusions are not just simplistic; they are also insulting. The idea that African-Americans would consciously choose slavery rather than freedom doesn't even work as a metaphor. Even when Uncle Tom, who along with his cabin, became the byword for racial subservience tells his master, Augustine St Clare, that he would rather be free than enslaved. "Why Tom, you couldn't possibly have earned, by your work, such clothes and such living as I have given you," says St Clare. "Know's all that Mas'r," says Tom. "But I'd rather have poor clothes, poor house, poor everything and have 'em mine, than have the best, and have 'em any man else's."

To assert otherwise is to deny the historical agency of black Americans, from the underground railroads and abolitionists through to the civil rights and black power movements as they have strived not only to improve their own lot but democratise the whole country.

Von Triers' latest work has prompted some to ask why African-Americans don't make more films about slavery. "First of all we don't define the terms," says Michael Smith, a documentary film-maker. "We don't have the resources or the power within the film industry to make the films we want to make because nobody thinks anyone will go and see them. Steven Spielberg can make Amistad because he is Steven Spielberg. But even then that film is as much about John Quincy Adams as it is about black people in slavery. Secondly, we do make films. There was Night John by Charles Burnett about a girl who learns to read, and Sankofa, by Haile Gerima, about an Ethiopian rebellion against Italian colonialism. Everything we do is predicated on slavery in some way. It's always there. Eve's Bayou is about slavery. Do the Right Thing is about slavery. Just because they are not set in the slave era doesn't mean that the issue isn't right there."

Von Trier has never been to the US - he is afraid of flying - and it shows. He doesn't like the US either - and that shows too. But to condemn Manderlay for being "standard leftist and anti-American agitprop" as one reviewer did and many others suggested is as simplistic as the film itself. The hostility that so many Americans have to foreigners saying anything about their country that isn't laudatory shines through in many of the reviews. The film may be slow and long - but it is not trite. Nor is it easy. Some reviewers have argued that the credits, which show iconic stills of racial strife and black poverty to the tune of David Bowie's Young Americans is the best part of the film. The real question that arises from Manderlay is not whether America is ready for free black people but whether they are ready for Lars Von Trier.

· Manderlay is released on March 3