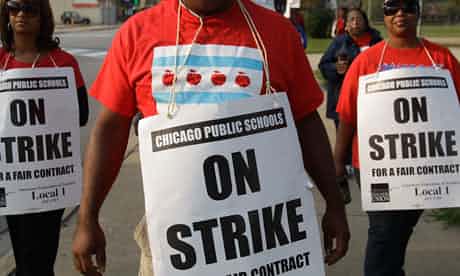 Chicago mayor Rahm Emanuel raised the stakes in his confrontation with the city's teachers' union on Monday as he launched legal action to force teachers back to work.

City attorneys asked a judge to declare the strike illegal, claiming it endangers the health and safety of students and contravenes a new state law that has ostensibly outlawed strikes over issues like evaluations and rehiring.

"This was a strike of choice and is now a delay of choice that is wrong for our children," Emanuel said in a written statement.

The judge has sought to delay making a decision until Wednesday, which may obviate Emanuel's legal strategy if the delegates ratify the agreement tomorrow.

The legal move marks an intensification in a dispute most thought was winding down over the weekend after both sides said they had reached a framework they were comfortable with for agreement.

Last week ended with the expectation that schools would be open on Monday. That was the outcome union leader Karen Lewis said she was "praying for" and that one school board member said would only be prevented by something "nutsy" happening.

The week-long strike has received the overwhelming support of the city's parent,s although finding alternative arrangements for the 350,000 students has caused difficulties. It centred on the extensive use of testing for teacher evaluation and the right of teachers who have been fired from school closings to be rehired.

The agreement had reached a compromise on testing and agreed that teachers with good evaluations who have been laid off would be rehired when vacancies came up.

"I'm hard-pressed to imagine how they could have done much better", Robert Bruno, a professor of labor and employment relations at the University of Illinois at Chicago, told the Associated Press. "This is a very impressive outcome for the teachers."

But when union negotiators presented the new contract to their house of delegates for ratification on Sunday the delegates asked for more time to read it through. "There's no trust for our members of the board," Lewis said Sunday night. "They're not happy with the agreement. They'd like it to actually be a lot better."

The deliberation pushed the first possible day children could return to school to Wednesday – delegates will not meet until Tuesday because of Rosh Hashanah, the Jewish New Year. Delegates will meet with rank-and-file teachers over the next 24 hours to discuss the deal.

There were mixed feelings on the picket line at one north side school on Monday – as several cars continued to honk their support – about the delegates' decision to delay. There is little trust between teachers and city hall and so they understood the need to read over the contract carefully before signing off on it.

Most believed that the deal the negotiators have agreed is good, although the prospect of an extensive wave of school closings has made many wary. But there was also concern that further delay beyond Wednesday might test both the support of the public and the unity of the union. The response to Emanuel's legal threat was a mixture of disbelief and derision.

Anecdotally at least parents remain sympathetic to the teachers and say they understand why teachers are taking their time.

"As much as we want our kids back in school, teachers need to make sure they have dotted all their i's and crossed their t's," said Becky Malone, mother of a second grader and fourth grader, who have been studying at home and going to museums over the last week.

"What's the point of going on strike if you don't get everything you need out of it? For parents, it'll be no more of a challenge than it's been in the past week."

follow on twitter
RT @SRTRC_England: An exciting new role as head of #humanresources at #ShowRacismtheRedCard Please RT. #educatorsjobs @MichaelRosenYes @gar…
“We didn’t ask for Lady Hussey to resign. But, really, the monarchy must do better on race.” Wanting the monarchy t… https://t.co/Pmo9BYdWnf
RT @mikewhoatv: Riz Ahmed nails it…“where are you really from?” https://t.co/vbL0wJr9dW
RT @HertsSid: Lady Susan Hussey at Buckingham Palace be like https://t.co/hmTifZC32r
RT @ilfoglio_it: "Il razzismo c’è ovunque, l’antisemitismo pure, così come le persone mentalmente fragili o gli estremisti politici. Ma sol…
RT @LRBbookshop: This week's podcast is from our event celebrating the life and work of Dawn Foster Friends and colleagues @BizK1, @pierce…
RT @jhalakprize: Submissions for Jhalak Prize and Jhalak C&YA Prize Close on 9th December - https://t.co/yB28egOsIi
RT @eiecampaign: “1 in 3 nurses struggle to heat their homes and keep food on the table. Claps don’t pay the fucking bills.” @ZarahSultana…
RT @flying_rodent: It is remarkable that this - actively fucking over a big chunk of the public, screaming insults at them as loudly as you…
RT @ManchesterUP: Now available as Open Access! Amidst a searing critique of the university's neoliberal and imperial character, Remi Jose…
© Gary Younge. All Rights reserved, site built with tlc
Caduet online usa Cost of stendra at walmart What i should buy with tarceva Where to get zocor pills Can i take flagyl and zithromax together Get verapamil online Adcirca best buy How to get mirapex online Social anxiety disorder celexa Buy generic azulfidine