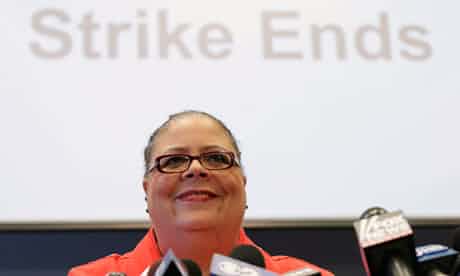 The Chicago teachers' strike has ended after union activists accepted a negotiated agreement, bringing to a close more than a week of school-closures and allowing students in the nation's third largest school district to return to class.

The union delegates, who extended the strike for two days on Sunday as they asked for more time to read the contract document, eventually endorsed their leader's advice that the deal they had negotiated had forced employers to concede considerable ground and that a better settlement was not possible through a strike.

"We said we couldn't solve all the problems … and it was time to suspend the strike," said Chicago Teachers Union president Karen Lewis at a news conference after the vote. "The issue is, we cannot get a perfect contract. There's no such thing as a contract that will make all of us happy. But do we stay on strike forever until every little thing we want can be gotten?"

The main sticking points in the agreement were using test scores as a major component of teacher evaluation and balancing the right of teachers who are fired after school closings to be rehired against the right of principals to pick their own staff. The two sides reached a compromise on evaluation and agreed that teachers with good evaluations would be rehired. The latter point was of particular concern because the Chicago is about to embark on another round of school closures in the city's mostly black and latino areas that will throw thousands of teachers out of work.

The last few days have been rocky for the union, confusing for the public and terrible for the image of the mayor, Rahm Emanuel. Union negotiators thought they had sealed an agreement and told parents, who overwhelmingly supported the strike, to prepare to send their children back to school. Then on Sunday afternoon the union's delegates demanded more time to read the contract, prolonging the strike by two more days.

Emanuel, who most Chicagoans believe shoulders most blame for the strike, issued an injunction claiming the strike was illegal and asking a judge to force the teachers back to work. The judge delayed the injunction while the teachers deliberated and would have heard arguments on Wednesday. There is little evidence that the threat of legal action had any impact on the union's deliberations.

There was some concern at picket lines on Tuesday morning that the union was split between the demands of teachers on the mostly white and wealthy north side and those on the mostly black and latino south and west sides, where the school closures will happen.

"I'm so thrilled that people are going back," said Lewis. "All of our members are glad to be back with their kids. It's a hard decision to make to go out, and for some people it's hard to make the decision to go back in."

The return to work brings to an end a frustrating week of make-shift arrangements for parents of the city's 350,000 school students. But it does not answer many of the underlying issues of poverty and creeping privatisation in one of the worst performing school districts of its size in the country.

follow on twitter
RT @SRTRC_England: An exciting new role as head of #humanresources at #ShowRacismtheRedCard Please RT. #educatorsjobs @MichaelRosenYes @gar…
“We didn’t ask for Lady Hussey to resign. But, really, the monarchy must do better on race.” Wanting the monarchy t… https://t.co/Pmo9BYdWnf
RT @mikewhoatv: Riz Ahmed nails it…“where are you really from?” https://t.co/vbL0wJr9dW
RT @HertsSid: Lady Susan Hussey at Buckingham Palace be like https://t.co/hmTifZC32r
RT @ilfoglio_it: "Il razzismo c’è ovunque, l’antisemitismo pure, così come le persone mentalmente fragili o gli estremisti politici. Ma sol…
RT @LRBbookshop: This week's podcast is from our event celebrating the life and work of Dawn Foster Friends and colleagues @BizK1, @pierce…
RT @jhalakprize: Submissions for Jhalak Prize and Jhalak C&YA Prize Close on 9th December - https://t.co/yB28egOsIi
RT @eiecampaign: “1 in 3 nurses struggle to heat their homes and keep food on the table. Claps don’t pay the fucking bills.” @ZarahSultana…
RT @flying_rodent: It is remarkable that this - actively fucking over a big chunk of the public, screaming insults at them as loudly as you…
RT @ManchesterUP: Now available as Open Access! Amidst a searing critique of the university's neoliberal and imperial character, Remi Jose…
© Gary Younge. All Rights reserved, site built with tlc
Generic lipitor cost Where can you buy requip over the counter How to get zyprexa Avalide pill cost Buy amaryl online Order lamisil Singulair and antihistamines together Buy real caverta online Imitrex and naproxen together Caduet online usa