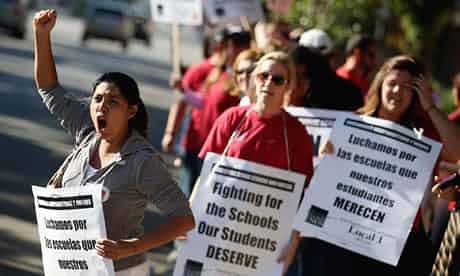 Teachers in Chicago took to the picket lines for the first time in 25 years Monday after unions and the city's school district failed to reach agreement over a new contract.

The strike marks the latest phase in an acrimonious, months-long dispute between Mayor Rahm Emanuel – a man not known for his consensual management style – and a union that has seen its base energised under strident new leadership.

The effects were felt throughout the city after parents received automated calls from the school board on Sunday evening informing them of the action. The message, coming just one week after the new academic year began for most students, said there would be no school, and informed parents of makeshift arrangements at libraries and other drop-off sites around the city.

At the centre of the dispute is Emanuel's attempt to reform the city's schools in a manner that would put a greater emphasis on test results when evaluating teachers, and demands for increased pay for a longer working day – plus a promise that teachers laid off in a widely anticipated series of school closings will be hired when new vacancies occur.

On Monday morning, both sides said they were close on pay but still had considerable distance to go on the question of evaluation and job security.

On the picket line outside Helen C Pierce school, Chris Inserra, a parent, said she was there to support the teachers because "they believe in children". "How can you evaluate a teacher who is at the toughest school in one of the roughest neighbourhoods, with all the problems that come with that, in the same way as a teacher in one of the best schools with the best resources?"

Jennifer Foss, the school's middle school co-ordinator, said her main concern was that they had not been provided with adequate resources to staff the longer school day, but she also worried about evaluation. "It's not that I don't think we should be evaluated," she said. "But it shouldn't be attached to test scores. That can have a very divisive effect in a school and students respond to teachers in very different ways."

The confrontation, the first teachers' strike in a generation, has been brewing since Emanuel made school reform the centrepiece of his election campaign last year. Not long after he took office Emanuel reneged on a teachers pay increase that had been negotiated. He then sought to extend the school day in return for a 2% pay increase, which was rejected by the union. It was thought that a new state law requiring 75% of eligible union members to support a strike would have forestalled industrial action.

But things have not gone his way. A poll in May revealed that parents of Chicago schoolchildren were almost three times more likely to back the unions than Emanuel.

Then, an independent arbitrator ruled that teachers should receive raises of between 15% and 20% for a longer working day, and criticised the school board for trying to extend the longer day during such tough times. When the union did put the strike to a ballot it received more than 90% support from its members for strike action.

The city accuses the union, whose leadership has taken a left turn in recent times, of being intransigent and demanding concessions that the city cannot afford or that will detrimentally affect students. "This is avoidable, because it is a strike of choice," claimed Emanuel. "This is about as much as we can do," insisted David Vitale, the president of the school board. "There is only so much money in the system."

The two sides did reach an agreement in July where the school board would rehire almost 500 teachers in non-core subjects like art and music who had been laid off to staff the longer day. But since then progress has stalled.

Union officials and teachers insist the strike is not primarily about money. Indeed, the recurring theme on the picket line was a grievance far more heartfelt and difficult to negotiate – respect, and a sense of being professionally undervalued. At a community-led strike school, set up to support the teachers, Inez Jacobson, a retired teacher who worked for 30 years in the city's schools, said: "Teachers have a very difficult job. They're trained professionals. They deserve better. You can't just put anybody in a classroom and get good results.

"If you evaluate them on test scores then they'll teach test taking skills. But that's not education. Kids learn in very different ways so that's no way to evaluate a good teacher."

The strike could have national ramifications, and risks becoming an issue in the presidential campaign. Emanuel was President Obama's chief of staff and the strike is taking place in Obama's hometown.

Republican presidential nominee Mitt Romney blamed both the union and Obama: "I am disappointed by the decision of the Chicago Teachers Union to turn its back on not only a city negotiating in good faith, but also the hundreds of thousands of children relying on the city's public schools to provide them a safe place to receive a strong education.

"President Obama has chosen his side in this fight, sending his vice-president last year to assure the nation's largest teachers union that: 'You should have no doubt about my affection for you and the president's commitment to you.' "

The White House is believed to be keeping its distance in the hope of a speedy resolution.

follow on twitter
RT @SRTRC_England: An exciting new role as head of #humanresources at #ShowRacismtheRedCard Please RT. #educatorsjobs @MichaelRosenYes @gar…
“We didn’t ask for Lady Hussey to resign. But, really, the monarchy must do better on race.” Wanting the monarchy t… https://t.co/Pmo9BYdWnf
RT @mikewhoatv: Riz Ahmed nails it…“where are you really from?” https://t.co/vbL0wJr9dW
RT @HertsSid: Lady Susan Hussey at Buckingham Palace be like https://t.co/hmTifZC32r
RT @ilfoglio_it: "Il razzismo c’è ovunque, l’antisemitismo pure, così come le persone mentalmente fragili o gli estremisti politici. Ma sol…
RT @LRBbookshop: This week's podcast is from our event celebrating the life and work of Dawn Foster Friends and colleagues @BizK1, @pierce…
RT @jhalakprize: Submissions for Jhalak Prize and Jhalak C&YA Prize Close on 9th December - https://t.co/yB28egOsIi
RT @eiecampaign: “1 in 3 nurses struggle to heat their homes and keep food on the table. Claps don’t pay the fucking bills.” @ZarahSultana…
RT @flying_rodent: It is remarkable that this - actively fucking over a big chunk of the public, screaming insults at them as loudly as you…
RT @ManchesterUP: Now available as Open Access! Amidst a searing critique of the university's neoliberal and imperial character, Remi Jose…
© Gary Younge. All Rights reserved, site built with tlc
Get pamelor online Where can you buy cialis How to get propranolol over the counter Xenical priceline Buy keflex pill Get arava online How to get a atacand prescription from your doctor Where to get zocor pills Buy clarinex pill How to get namenda without prescription