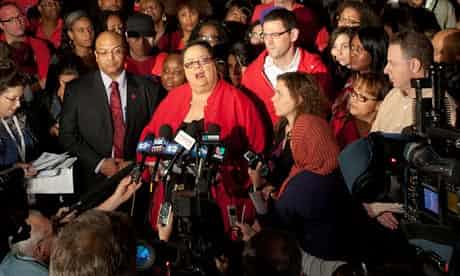 After months of deadlock and four days of strike action, Chicago teachers appeared on Thursday to be close to a deal with City Hall which would have children back to school by the beginning of next week.

Union negotiators who claimed on Tuesday that CPS claims of being close to a deal were "lunacy" left talks on Wednesday night very upbeat. Asked to use a scale of one to 10 regarding the chances of a deal being reached on Thursday, Chicago Teachers Union president Karen Lewis said: "I'm a nine."

The offer came on the day a poll revealed that 47% of Chicagoans backed the teachers against 39% who backed mayor Rahm Emanuel, whom three quarters of the city believed was doing an average, below average or poor job of handling the dispute.

"We're hoping we can tighten up some of the things we talked about yesterday... and get this thing done," Lewis told reporters.

Barbara Byrd-Bennett, chief education officer with CPS, was also confident, claiming children could be in school as early as Friday. "I can really, really say to you, if we stick to the issues, unless something really nutsy happens, kids can be back in school [tomorrow]."

The union, though, was keen to damp down expectations of a return at the end of the week since any deal would have to be overseen by lawyers and then ratified by the union's house of delegates, which is scheduled to meet on Friday.

The new proposals soften the CPS push for evaluations based on testing, offers the opportunity for appeals and prevents the CPS from reneging on previous salary agreements in times of economic crisis, as it did last year. Quite what has been settled on the thorny issue of rehiring is not yet known.

The CPS has just finished a round of school closures – concentrated in black and Latino areas – and is about to embark on another.

The CTU demands that any new hiring comes from the pool of teachers who have been laid off. The CPS has insisted that principals must have the right to hire who they want and as of Tuesday morning had assured only that laid-off teachers be guaranteed an interview.

It is difficult to know what prompted the CPS to shift its position. It is possible that, as school board representatives stated at the beginning of the week, the two sides were very close, even if the union did not know it.

It is also possible that local political considerations kicked in once it was clear that most Chicagoans blamed the mayor for the situation and that the teachers showed little sign of backing down.

Insiders say the atmosphere in the negotiations on Monday and Tuesday was becoming toxic and the makeshift arrangements cobbled together for and by parents were showing some strain.

National political considerations may also have been a factor, with Democratic officials anxious to thwart a conflict between unions and the party in the president's home town a couple of months before the presidential election.

But something changed. After all, on Wednesday night CPS supporters were still screening anti-strike ads on local television, even as a deal was being hammered out, and Thursday morning's headlines quoted Lewis saying the two sides were "not inches but kilometres apart".

follow on twitter
RT @SRTRC_England: An exciting new role as head of #humanresources at #ShowRacismtheRedCard Please RT. #educatorsjobs @MichaelRosenYes @gar…
“We didn’t ask for Lady Hussey to resign. But, really, the monarchy must do better on race.” Wanting the monarchy t… https://t.co/Pmo9BYdWnf
RT @mikewhoatv: Riz Ahmed nails it…“where are you really from?” https://t.co/vbL0wJr9dW
RT @HertsSid: Lady Susan Hussey at Buckingham Palace be like https://t.co/hmTifZC32r
RT @ilfoglio_it: "Il razzismo c’è ovunque, l’antisemitismo pure, così come le persone mentalmente fragili o gli estremisti politici. Ma sol…
RT @LRBbookshop: This week's podcast is from our event celebrating the life and work of Dawn Foster Friends and colleagues @BizK1, @pierce…
RT @jhalakprize: Submissions for Jhalak Prize and Jhalak C&YA Prize Close on 9th December - https://t.co/yB28egOsIi
RT @eiecampaign: “1 in 3 nurses struggle to heat their homes and keep food on the table. Claps don’t pay the fucking bills.” @ZarahSultana…
RT @flying_rodent: It is remarkable that this - actively fucking over a big chunk of the public, screaming insults at them as loudly as you…
RT @ManchesterUP: Now available as Open Access! Amidst a searing critique of the university's neoliberal and imperial character, Remi Jose…
© Gary Younge. All Rights reserved, site built with tlc
Xenical priceline Avelox price walmart Can you buy avapro over the counter Actonel pill price Tarceva canada price How to get aggrenox without prescription Cheap propecia online canada Can i buy cellcept Where can you get zetia Where to buy cellcept