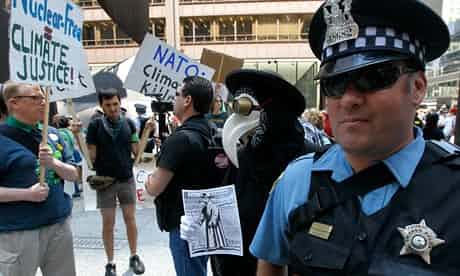 Chicagoans woke up on Friday to the prospect of a long weekend of global attention and local chaos, as around 60 world leaders started to arrive for the Nato summit. The front page of the Chicago Sun-Times suggested Nato was an acronym for Now Arrives The Ordeal.

Under travel tips in the paper's five-page "summit survival guide" the advice was clear: "Stay home. Seriously." As the unseasonably warm spell continued, snow ploughs were lined up near Grant Park to be used as makeshift "rolling roadblocks".

With rush hour traffic light and the streets in the Loop relatively empty it seemed as though half the city, driven to distraction by warnings of chaos, violence and mayhem, had heeded their advice and decided to take a mental health day.

The large scale protests kicked off in good humour and style with 2,000 nurses, calling for a robin hood tax to offset cuts in social services, education and healthcare, had their numbers swelled by union members, veterans, Occupy activists and people who just wanted to hear Rage Against the Machine's Tom Morello.

Later in the afternoon there will be a Crime Busting march on "Chicago's Climate Change Crooks" with supporters of the Environmental Justice Alliance handing out warrants for the arrest of corporations and governments responsible for destabilising the climate.

Even the cops were at it, with the Fraternal Order of Police (the police union) putting up billboards on the routes Nato delegates will be taking opposing cuts. "If having 20 people shot per weekend doesn't embarrass the mayor then nor should billboards demanding more manpower," argued Mike Shields, the FOP president.

Regular protesters had started streaming in in their hundreds on Thursday night. They came every which way. A delegation from Atlanta marching briskly up Lincoln Avenue with backpacks bobbing behind them late into the night. Some walked the 170 miles from Madison, Wisconsin.

In the Lakeview neighbourhood they were reportedly greeted by a 600-strong welcome. Elsewhere in the city, at 11pm on Wednesday Chicago police broke down doors in an apartment building, searched the units and then arrested nine people who planned to protest for allegedly making or possessing Molotov cocktails. Lawyers say it was just beer-making equipment.

"The city has so far failed to produce any evidence or the search warrant affidavit used in the raid," said Kris Hermes of the National Lawyers Guild.

When police detained the people, they also seized parts of a beer-making kit, including bottles and caps, and a cellphone, Gelsomino said.

"As far as we know, there was no liquid in the bottles," Hermes said Friday morning.

Lawyers, who say they were not informed of their clients' whereabouts for 17 hours after their arrest, insist the raid was a "pre-emptive" bid to intimidate protestors.

"This is the playbook," said Sarah Gelsomino, of the People's Law Office. "Shoddy police work. It's a fear campaign. Four of those arrested have since been released.

A Chicago Tribune poll indicated most Chicagoans oppose Barack Obama's plan to withdraw troops from Afghanistan in 2014. The survey showed that 42% favoured withdrawal "as quickly as possible" while 20% supported staying "longer if necessary" and only a third backing Obama's policy.

But the demonstrations have placed as much if not more emphasis on economic priorities during a time of crisis than on matters of foreign policy, dovetailing the two where possible to make the case for more to be spent on the poor than on war.

An alternative 99% tour of the city, organized by the Grassroots Collaborative, sought to show how the money spent showcasing the city on the international stage could have been better put to use closer to home.

On the south side, longtime resident Charles Brown walked around Englewood, a community made desolate by home foreclosures. On some blocks at least half of the bank-owned houses were boarded up – making them magnets for drug dealing and other crimes.

"If we could just have a fraction of the $14m they're spending on social functions for Nato think what we could do in a neighbourhood like this."

Further west in Brighton Park, Latina women in luminous bibs conduct parent patrols around Davis Elementary School in a gang-riddled area where they say there is a shooting every other week. Just 15 minutes away, in Obama's hometown, global dignitaries are preparing to discuss security.

follow on twitter
#JosephineBaker ceremony in Paris https://t.co/M8gg06zfTl
RT @SynergiCC: On Thursday, watch out for the release of @JamesNazroo's presentation on #BLM, #racism and #health harms in the UK. #FromPle…
This is basically the thread I put out last night...but soooo much fancier-looking. https://t.co/bWUIGEmtBY
@tjr_london In Paris for the Josephine Baker ceremony I'm afraid.
RT @BritishVogue: As she leads Barbados towards republicanism, charismatic Prime Minister Mia Mottley talks to @GaryYounge about shaking of…
RT @MCRSociology: As #JosephineBaker is elevated to the pantheon today, @garyyounge writes on race, racism and republicanism in contemporar…
@PriyamvadaGopal Thanks @PriyamvadaGopal . Where would I find a comprehensive account of that conference or start l… https://t.co/40Ud2rS6Kj
"African Americans enjoyed an honorary, if contingent, racial status: free to write about racial atrocities in Amer… https://t.co/vRobBofK5D
@chakrabortty What a lovely message. I miss those days. I miss you (not sure I miss the office as such. In Farringd… https://t.co/eviENdkaAp
6/ "Mine is a name with a story from afar, that doesn’t have to be told, that is not often misspelt and that doesn’… https://t.co/F47tepvsxY
© Gary Younge. All Rights reserved, site built with tlc
Buy sildenafil generic online Buy discount vardenafil Antabuse buy Buy valtrex online with free samples Tadalafil online us How to get a cipro prescription from your doctor Where can you buy cialis