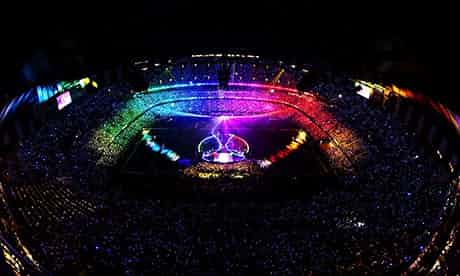 The Super Bowl is as much about the ads as it is about the game. Last week, for the fifth time in six years, the American football final broke the record for the most watched television event in the nation's history. That's serious marketing real estate, with the average 30-second spot costing around $4m (£2.4m). At this price companies expect not just an ad but an artefact – the kind of cultural product that not only shifts units but touches the zeitgeist.

This year Coca-Cola outdid itself. In most ways its commercial couldn't be less original. It begins with a man in a cowboy hat on a horse and ends with children running towards the Grand Canyon, all to the words of America the Beautiful. In between, people of various hues, regions and settings – in cities and on prairies, in yarmulkes and a headscarf – eat popcorn, ice-skate, blow bubblegum, surf and dance. Were it not for the gay dads, it would be indistinguishable from the official videos the US state department shows you while you're waiting in immigration – all the diversity and none of the discrimination: America's official post-civil rights script.

There was just one twist. The song is sung in nine different languages: English, Spanish, Tagalog, Mandarin, Hindi, Hebrew, Keres, French and Arabic. For this – and this alone – American conservative punditry threw a spectacular tantrum.

"If we cannot be proud enough as a country to sing America the Beautiful in English," said former congressman Allen West, "by a company as American as they come – doggone we are on the road to perdition." Fox commentator Todd Starnes tweeted: "Coca-Cola is the official soft drink of illegals crossing the border." Another angry viewer tweeted: "Nice to see that Coke likes to sing an AMERICAN song in the terrorist's language."

The "road to perdition" is paved by clowns like these. But progressives have precious little reason to feel smug. The last thing we need is diversity being defined by Coca-Cola – a multinational corporation that has been accused of human rights, labour and environmental abuses on several continents (allegations the company denies). The notion of diversity, in which institutions look different but act the same, brings not equal opportunities, but photo opportunities. American liberals at least should understand this by now. For the past six years they have revelled in the presence of a black president even as the discrepancy between black and white has grown; they have taunted Republicans for their backward views on immigration while Barack Obama has deported more undocumented migrants than any of his predecessors. "When people call for diversity and link it to justice and equality, that's fine," Angela Davis once told me. "But there's a model of diversity as the difference that makes no difference, the change that brings about no change."

And yet even when these symbols of diversity don't represent a material improvement in the lives of those without privilege, they nonetheless mark a threat to those with it.

Glenn Beck, once Fox's foremost firebreather, understood the ad as a provocation. "'Why did you need that to divide us politically?' Because that's all this ad is. It's in your face, and... if you're offended by it, you're a racist. If you do like it... You're for progress." He had a point. Coke's claim to be shocked at the response was disingenuous. The blowback was not only predictable – in marketing terms it was the point. For the ad positioned itself on a crucial fault line in America's culture wars between tradition, myth and modernity.

Many of the key assumptions about what it means to be American are in tremendous flux, and this is posing a fundamental challenge to conservatives' who wish to promote their core cultural values and create a viable electoral coalition. Trends keep presaging tipping points. Polls showed that in October Protestants became a minority for the first time; some time in the next 15 years China's GDP will overtake that of the US; by 2042 white people will be a minority. Meanwhile, old certainties are giving way to more fluid affiliations, illustrating that these shifts are as much about attitudes as demographics. The largest increase among religious groups is of those with no religious affiliation; the sharpest increase in racial identification is of those who identify as more than one race; one in three Americans now live in states where gay marriage is legal.

For a movement heavily reliant on white votes and evangelical mobilisation, with supporters more nervous about foreign trade and immigration than most, these are unsettling times.

Their anxieties were laid out by rightwing columnist Richard Cohen in the Washington Post in November. "People with conventional views must repress a gag reflex when considering the mayor-elect of New York – a white man married to a black woman and with two biracial children. (Should I mention that Bill de Blasio's wife, Chirlane McCray, used to be a lesbian?) This family represents the cultural changes that have enveloped parts – but not all – of America. To cultural conservatives, this doesn't look like their country at all."

But Cohen's conventions no longer hold. Moreover, it is cultural conservatives' country and there's precious little they can do about it beyond either embracing it or howling at the moon. The latter they do with great zeal and regularity. Last week Republicans once again thwarted immigration reform – not because they don't think it will eventually happen, but because to concede its inevitability would demand a reckoning with a world they are loth to acknowledge exists.

But the main problem with conservatives' conniptions is that the world they seek to preserve never existed either. Homosexuality wasn't invented in the 21st century; mixed-race relationships, be they by coercion or consent, are an integral part of the nation's history, as are mass immigration and multilingualism. Indeed, America the Beautiful – the patriotic song they so desperately want to save from the tongues of non-English speakers – was written by Katherine Lee Bates, a lesbian socialist. But then she never spoke their language, of exclusion and privilege, either.