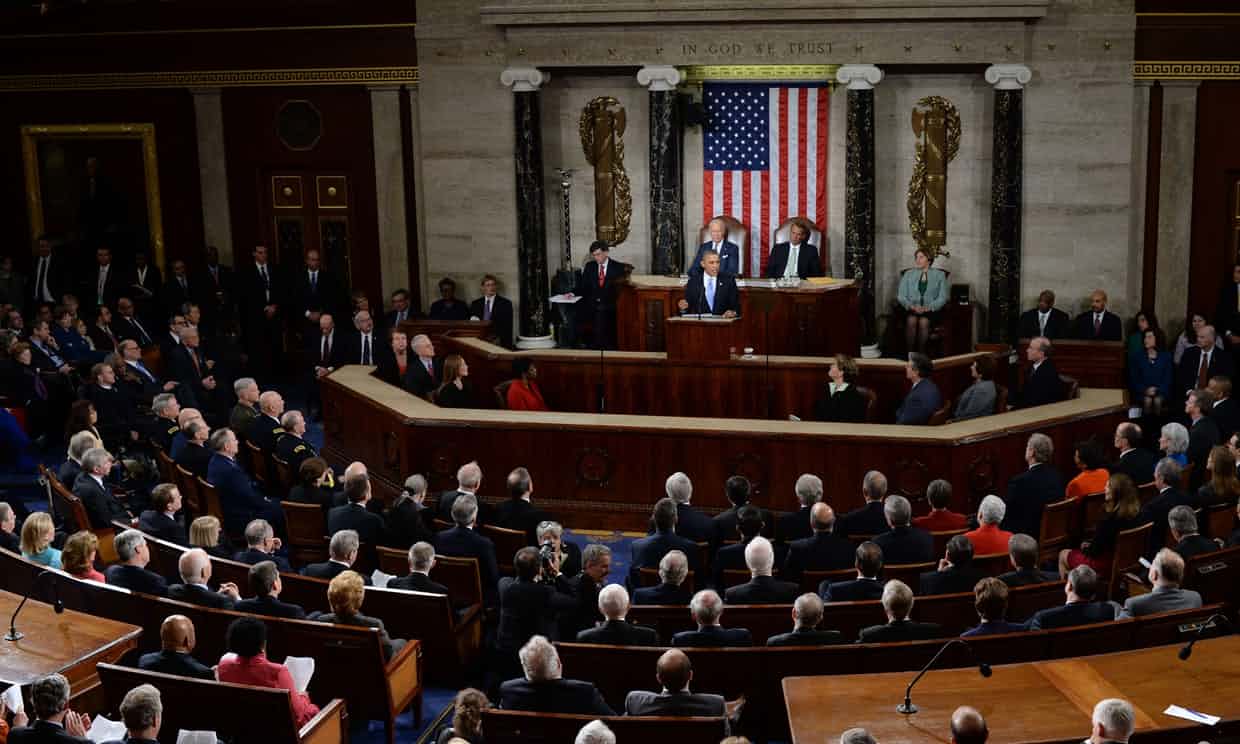 The State of the Union confirmed only that our union is in a state
The Guardian,
Photograph: Jewel Samad/AFP/Getty Images

A state of the union address in the sixth year of a presidency is inevitably buffeted by the crosswinds of time. The president has been in power long enough that their record has already eclipsed their potential. But they have too long remaining to start openly making an appeal for their place in history.

Rhetorically, they can neither be too florid nor too timid. Nobody wants to hear about their pipe dreams – if they were that good they would have heard them already. And yet to talk in too much detail about the work they are going to do is too small bore for such a big occasion.

And so they walk the narrow line between being practical and predictable, utopian and utilitarian. What was most striking about this address was that in most important ways it could have been written at almost any time since Obama took office. The major themes of inequality, support for the troops, bipartisan compromise, climate change, healthcare, international diplomacy, world-class education, tax loopholes were familiar – there was precious little that was new here.

In previous years he has come to the podium with something – a recent election, Osama Bin Laden's execution, Iraqi troop withdrawal, signing into law the Affordable Care Act, the stimulus bill, the auto industry rescue. This year he had a reviving economy. He made that point early on.

“The lowest unemployment rate in over five years. A rebounding housing market. A manufacturing sector that’s adding jobs for the first time since the 1990s. More oil produced at home than we buy from the rest of the world – the first time that’s happened in nearly twenty years. Our deficits – cut by more than half.”

The trouble is many people don't feel wealthier and the president they have seen over the past year is not one pushing a recovering economy but a man battling endless crises – many self-imposed – from the NSA to the failing healthcare website.

Moreover, the trouble is that in contradiction to the pomp and ceremony of the occasion in which the president takes centre stage, everybody is painfully aware of his limitations in forcing his will on Capitol Hill. His low approval ratings coming into this address were not because the public dislikes his agenda. Broadly speaking they believe that inequality is a problem, they do not want Obamacare repealed and they want troops out of Afghanistan. It's that they don't believe that he can deliver it. And while much was made of those approval ratings the fact is that he remains far more popular than the body he was talking to: Congress.

So this time he was far less strident in his tone towards his Republican adversaries than he has been in the past. “Last month, thanks to the work of Democrats and Republicans, this Congress finally produced a budget that undoes some of last year’s severe cuts to priorities like education … In the coming months, let’s see where else we can make progress together.”

Less Martin Luther King (“The arc of history is long but bends towards justice”) and more Rodney King (“Can we all get along?”) this was a far more plaintive and far less polemical speech than usual.

He had his moments. On climate change he gave not an inch to the sceptics. “The debate is settled,” he said. “Climate change is a fact. And when our children’s children look us in the eye and ask if we did all we could to leave them a safer, more stable world, with new sources of energy, I want us to be able to say yes, we did.”

One pay equality he was also forceful. “It’s time to do away with workplace policies that belong in a “Mad Men” episode. This year, let’s all come together – Congress, the White House, and businesses from Wall Street to Main Street – to give every woman the opportunity she deserves. Because I firmly believe when women succeed, America succeeds.”

But the fact that he would even have to make the case for equal pay for equal work and global warming says something about the state of his opposition. Anyone who wanted to witness what a tight corner the Republicans have painted themselves into only had to see them remain seated as he called for equal wages for women, higher wages for the poor, healthcare for the sick.