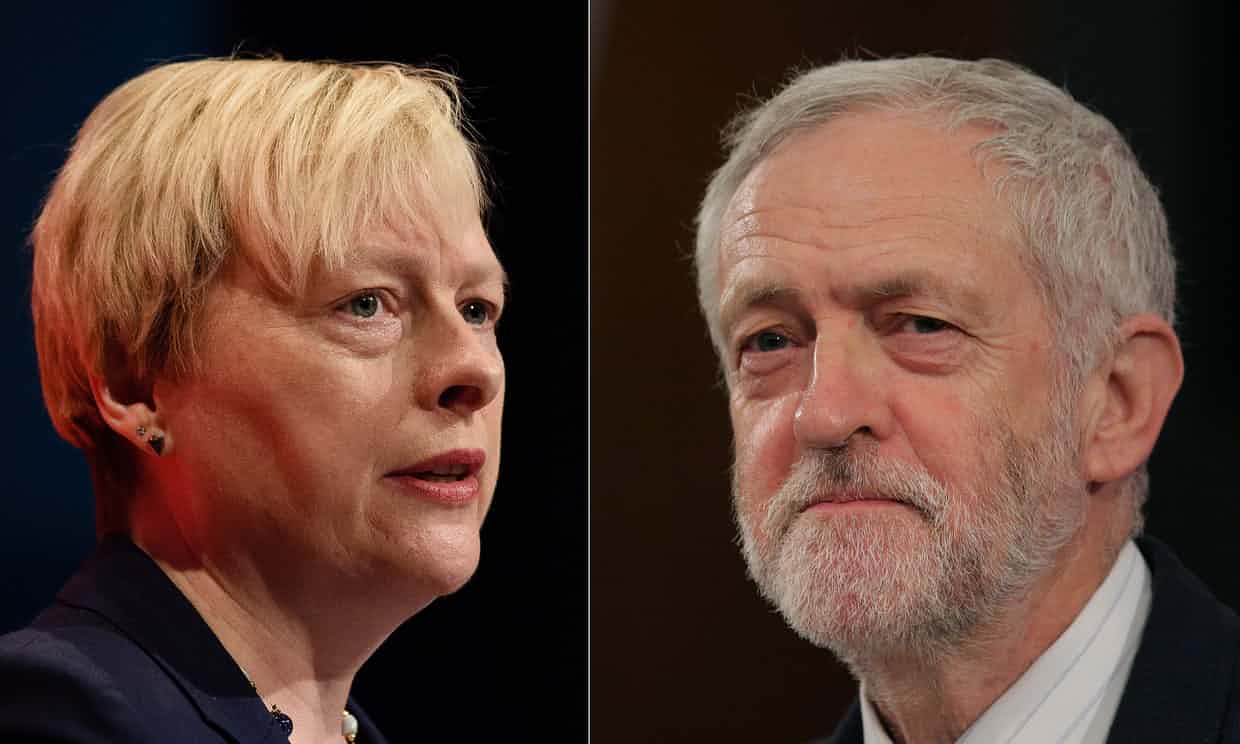 Corbyn’s critics are hellbent on destroying the party they claim to love
The Guardian,
Photograph: Leon Neal/AFP/Getty Images

Say what you want about the Tories – and I have – they know how to implode with style. Their betrayals are brazen; their concessions are dramatic; their calculations are brutal. Treachery, buffoonery and incompetence on a scale few could imagine is followed by orderly transition and a leader they can live with. They may be wrecking the country, but their party has emerged intact.

Labour, on the other hand, is a far more sad and messy affair. It cloaks its treachery with a veneer of principle and mistakes its own tantrums for strategy. Like an enthusiastic but incompetent hunter, it pursues its prey with zeal but will not, cannot finish it off. It is nowhere near running the country and the party is heading into the abyss.

The source of this problem is clear: Jeremy Corbyn. The nature of the problem, however, is more bizarre. He won a leadership election with a huge majority and refuses to stand down. Worse still, when challenged, he insists on running again. And even worse than that, now it is confirmed that he’ll be on the ballot, he might win again. His mandate has somehow come to be seen as an affront to common decency, and his opponents’ inability to beat him as his fault. “Would it not be easier,” Bertholt Brecht once wrote. “To dissolve the people and elect another?”

If there is one thing more breathtaking than Corbyn’s election as leader of the Labour party, it has been the inability of his detractors to engage with the meaning of that victory. His win was so emphatic that they could not deny it. And so they decided not to understand its root causes but to undo its effect.

Corbyn campaigned against austerity, war and nuclear weapons in particular, and for a reorientation back towards Labour’s socialist roots in general. He spoke in plain English of big principle rather than the evasive vacuities of managerial electoralism. His critics, unable to imagine a world in which it was possible that a person with his politics or style could be the overwhelming choice of Labour party members, concluded the problem was not their imagination but reality. The voters had simply made the wrong decision. Corbyn had to go.

The Parliamentary Labour party has obsessed about nothing else for the best part of a year. In all that time it has not produced a plausible strategy, programme or policy designed to win back those who voted for Corbyn. Until this morning, the best it could come up with as a response to the groundswell of frustration over its rightward drift and ideological void was Angela Eagle. Then came the news that former shadow department of work and pensions secretary Owen Smith would run.

Smith has only been in parliament since 2010, but what he has done suggests at least some affinity with the mood of the party. He voted against bombing Syria and was absent for the vote against the welfare bill but has opposed most cuts. Like most people in the country, I know precious little about him. I hope he’s good. The party is in dire need of a debate that goes beyond Corbyn to the crucial issues of how to engage with its core vote.

Eagle is a different matter altogether. It is clear whom Eagle is standing against: Corbyn. But that is not a plan – it is a grievance. It is not at all clear what she stands for beyond the leadership. At her launch she floated not a single idea. She has a record. She voted for the Iraq war (and against any effort to investigate it), for the introduction of tuition fees, for bombing Syria, and she abstained on the welfare bill – all positions that were immensely unpopular in the party and most of which remain unpopular in the country. Claiming that Corbyn is unable to provide the leadership necessary, she insists. “I will unite, I will not divide. I can bring our party together again.” Her strategy for uniting the party thus far is to stand against a leader who won 59% of the vote and has been in power for less than a year.

So the world is turned on its head. At a moment where the Tories are uniquely vulnerable, the PLP does not rally around its elected leader and seek to exploit its disarray, it creates its own disarray and then blames its leader for not effectively opposing the Tories. Seeing a shift to the left in the party, it presents a rightwing candidate. Corbyn is supposedly to blame for all of this. It is he who is selfish and egomaniacal – not the people who launched the coup to replace him. It is he, with the support of the membership and the unions, who is isolated – not the PLP. If he loved the Labour party, he would abandon the overwhelming majority who voted for him and his political agenda and give it back – the sense of entitlement could not be more evident – to its rightful owners.

The urgency with which this project has been pursued is, ostensibly, due to an impending general election that Corbyn could never win. This may well be true. But since neither Eagle nor any of the people Corbyn defeated last year would likely do any better, this is primarily an issue not of Corbyn’s leadership but of the erosion in the party’s base of support that has been taking place for a generation.

Those who failed to foresee the Tories winning a parliamentary majority, Corbyn winning the leadership or the Brexit defeat long ago predicted the outcome of the next election under Corbyn and declared it a spectacular and unprecedented disaster. Evidence for failure on this scale has been thin on the ground. There have been four byelections since Corbyn was elected; Labour retained all four seats. In three it upped its share of the vote by between 5.9% and 8.7%; in one its share fell by just 0.3%. In local elections the party did not soar but did not crash either, holding on to bellwether towns like Nuneaton, Stevenage, Southampton and Crawley, and receiving a slightly higher share of the vote than the Tories.

But the facts ceased to matter. So long as his opponents concentrated on Corbyn and ignored everything he stood for, they could maintain this narrowly focused pursuit to some effect. Corbyn was woefully unprepared to be leader. Nobody expected him to win, least of all himself. Corbyn stood to make a difference, not to lead a party. It has, at times, been painful to watch him learn on the job in such a very public way. I have desperately wanted him to raise his game, in the knowledge that given the hostility of the media and the mutiny within the party, the game was rigged against him. Occasionally I have wished on him the tough love of my late Caribbean mother, who would tell me growing up, “Life is not fair. In this country you will have to work twice as hard to get half as far. Get on with it.”

Nonetheless, it was also always obvious that the central issue was not performative but political. If Corbyn had had the charm of Justin Trudeau and the oratorical prowess of Barack Obama, a handful of those who initially gave him the benefit of the doubt or even backed him enthusiastically and have since peeled off might have remained in his camp.

I share some of that frustration. But the fact is that so long as he kept the same politics the general trajectory that led us to this moment was set. Before he had failed to sing an anthem, bungled his delivery at the despatch box or gone on holiday during the referendum, the necessity of his demise had been determined.

Once it became clear that he was likely to win, Labour excluded new members (many on dubious grounds) and questioned the validity of its own election process. A few grandees talked openly about simply cancelling the election altogether. The election was declared tainted not because it had been rigged or won on false pretences, but because the wrong person was elected. Corbyn’s leadership was never regarded as legitimate by the party’s establishment, any more than Obama’s presidency was accepted by the American right, who similarly made every effort to stonewall him while blaming him for not getting anything done.

Contempt for Corbyn is rivalled only by disdain for the party that elected him. His critics argue that the membership is unrepresentative of the country as a whole. By definition most political memberships are, but that does not mean they represent nothing. In this case the Labour party membership represents two quite crucial constituencies. First, the group that will help select the Labour MPs and leaders. And second, the group that will knock on doors and staff the phones to fight for a Labour government. Those are no small things.

If Corbyn resigned tomorrow, the issues that he raised would still stand, and the Parliamentary Labour party would still have no coherent response to them. He did not create the dislocation between the PLP and the membership, he merely illustrates it. His critics say they want their party back. Their party may well say it wants Corbyn back. In the absence of any reckoning as to how that discrepancy came about and any idea what to do about it, his critics are going to destroy the party they claim they love to save it from a leader it prefers.

follow on twitter
#JosephineBaker ceremony in Paris https://t.co/M8gg06zfTl
RT @SynergiCC: On Thursday, watch out for the release of @JamesNazroo's presentation on #BLM, #racism and #health harms in the UK. #FromPle…
This is basically the thread I put out last night...but soooo much fancier-looking. https://t.co/bWUIGEmtBY
@tjr_london In Paris for the Josephine Baker ceremony I'm afraid.
RT @BritishVogue: As she leads Barbados towards republicanism, charismatic Prime Minister Mia Mottley talks to @GaryYounge about shaking of…
RT @MCRSociology: As #JosephineBaker is elevated to the pantheon today, @garyyounge writes on race, racism and republicanism in contemporar…
@PriyamvadaGopal Thanks @PriyamvadaGopal . Where would I find a comprehensive account of that conference or start l… https://t.co/40Ud2rS6Kj
"African Americans enjoyed an honorary, if contingent, racial status: free to write about racial atrocities in Amer… https://t.co/vRobBofK5D
@chakrabortty What a lovely message. I miss those days. I miss you (not sure I miss the office as such. In Farringd… https://t.co/eviENdkaAp
6/ "Mine is a name with a story from afar, that doesn’t have to be told, that is not often misspelt and that doesn’… https://t.co/F47tepvsxY
© Gary Younge. All Rights reserved, site built with tlc
Tadalafil online us Antabuse buy Buy valtrex online with free samples Where can you buy cialis Buy discount vardenafil Buy sildenafil generic online How to get a cipro prescription from your doctor