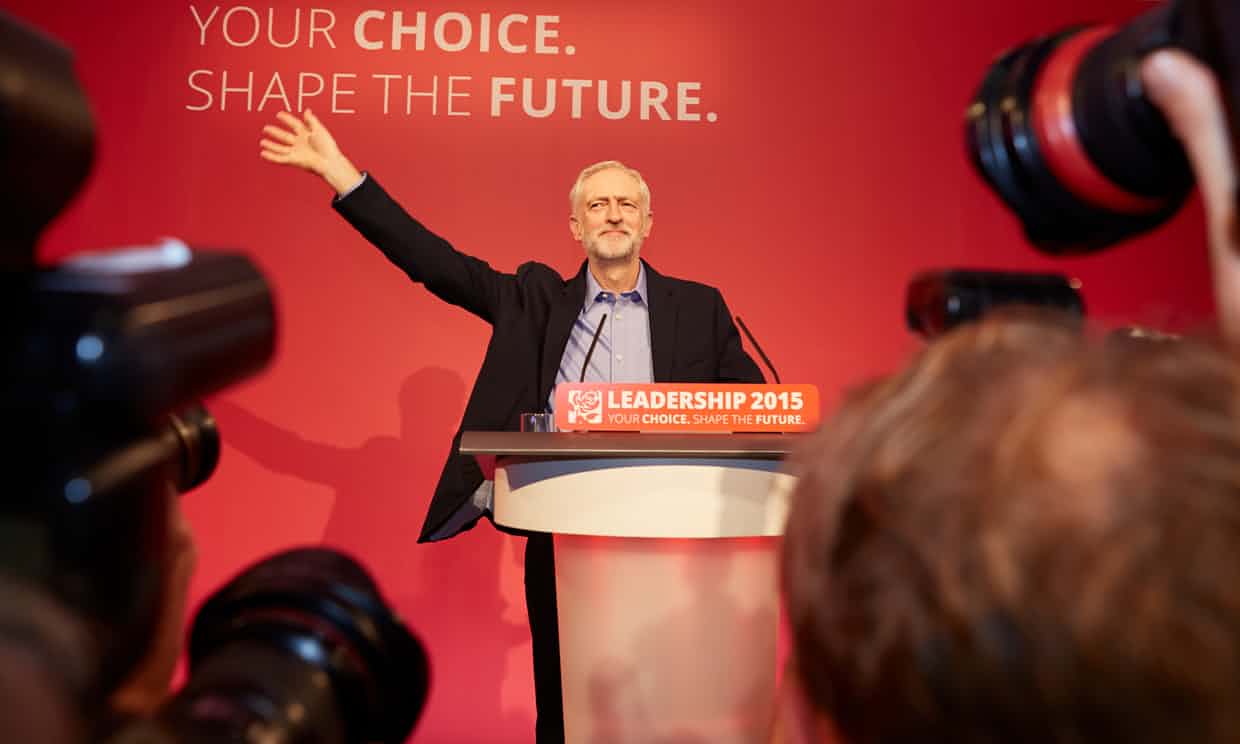 Corbyn victory energises the alienated and alienates the establishment
The Guardian,
Photograph: Andy Hall for the Observer

“I’ve believed as many as six impossible things before breakfast,” the Queen told Alice in Through the Looking-Glass. By lunchtime on Saturday that number would have been fast approaching double figures. The leftwing stalwart Jeremy Corbyn won the Labour leadership election. His first act as leader would be to address a huge rally welcoming refugees.

Romping home in the first round with 59% of the vote, Corbyn’s victory was emphatic – the biggest electoral mandate of any party leader in British political history. There aren’t enough Trotskyists, entryists, devious Tories and random renegades to explain such an overwhelming victory. As his campaign gained momentum, many have been in denial. But no one can now deny he was the party’s choice. On Saturday afternoon you could see his supporters wandering around, badges proudly displayed, in a dazed state of glee and disbelief, not quite able to comprehend the enormity of what they’d done, what he’d done and what might come next.

Whatever one thinks of the wisdom of that choice, the transformational nature of it is beyond question. It has revived debates about nationalisation, nuclear deterrence and wealth redistribution and returned the basis of internal Labour party divisions to politics rather than personality. It has energised the alienated and alienated the establishment. The rebels are now the leaders; those who once urged loyalty are now in rebellion. Four months after losing an election, a significant section of Labour’s base is excited about politics for the first time in almost a generation while another is in despair.

Ascetic and unassuming, slight of stature and soft of timbre, Corbyn was always as unlikely a recipient of his own “mania” as the diffident tennis player Tim Henman. He’s a man of conviction but little charisma.

But then little of this is really about Corbyn. He is less the product of a movement than the conduit for a moment that has parallels across the western world. After almost a decade and a half of war, crisis and austerity, leftwing social democrats in all their various national guises are enjoying a revival as they seek to challenge the neo-liberal consensus. In the US, the self-described “democratic socialist” Bernie Sanders is outpolling Hillary Clinton for the Democratic nomination in key states. Podemos in Spain, Syriza in Greece and Die Linke in Germany are all posing significant challenges to mainstream centre-left parties.

Beyond the left, Corbyn’s ability to answer questions in a clear and straightforward manner amounts to a rebuke to the political class in general. In this and many other respects, his strengths were accentuated by the weakness of his leadership opponents. With their varying degrees of milquetoast managerialism, they were not only barely distinguishable from each other but had platforms that were forgettable even when they were decipherable. Short of perhaps a speeding ticket, they didn’t appear to have a single conviction between them. There is nothing to suggest any of them were more electable than Corbyn.

So for Labour members seeking a leader who stood for more than office, Corbyn was the obvious choice. Nobody, least of all Corbyn, saw this coming.

His trajectory these last few months has conformed to that dictum for radical reformers generally attributed to Gandhi: “First they ignore you, then they laugh at you, then they fight you, then you win.”

He scraped on to the ballot with seconds to spare with the help of MPs who didn’t support him but wanted to ensure the voice of the Labour left could at least be heard – a tokenistic gesture to demonstrate the party still had roots even if they weren’t showing. Nobody expected that voice to be heard so clearly, understood so widely or taken so seriously by the membership. Party grandees thought his presence would offer a debate about austerity; few assumed he would win it. His candidacy was supposed to be decorative but never viable.

From the moment it was clear that assumption was flawed, the political and media class shifted from disbelief to derision to panic, apparently unaware that his growing support was as much a repudiation of them as an embrace of him. Former Labour leaders and mainstream commentators belittled his supporters as immature, deluded, self-indulgent and unrealistic, only to express surprise when they could not win them over. As such this reckoning was a long time coming. For the past couple of decades the Labour leadership has looked upon the various nascent social movements that have emerged – against war, austerity, tuition fees, racism and inequality – with at best indifference and at times contempt. They saw its participants, many of whom were or had been committed Labour voters, not as potential allies but constant irritants.

The slew of resignations from the party’s frontbench after the result was announced and apocalyptic warnings from former ministers about the fate of the party under a Corbyn leadership illustrate that this attitude hasn’t changed. The party has spoken; its old leaders would do well to listen but for now seem intent on covering their ears. They won’t win it back with snark and petulance. But they can make their claims about unelectability a self-fulfilling prophecy by refusing to accept Corbyn’s legitimacy as party leader.

Not only is Corbyn not being granted a honeymoon, relatives are determined to have a brawl at the wedding.

Nonetheless, the question of whether Corbyn is electable is a crucial one to which there are many views but no definitive answers. We are in uncharted waters and it’s unlikely to be plain sailing. May revealed that the British electoral landscape is both fractured and wildly volatile. What works in London and Scotland may not work in middle England and the south-east. To some extent Corbyn’s success depends on how he performs as leader and the degree to which his supporters can make their enthusiasm contagious.

It is a big risk. In the early 80s when Tony Benn made his bid for the deputy leadership, there was a huge trade union movement and peace movement to buttress him if he won. Corbyn inherits a parliamentary party in revolt and a determined but as yet unorganised band of followers. Clearly many believed it was a risk worth taking. In the words of the American socialist Eugene Debs: “It is better to vote for what you want and not get it than to vote for what you don’t want and get it.”