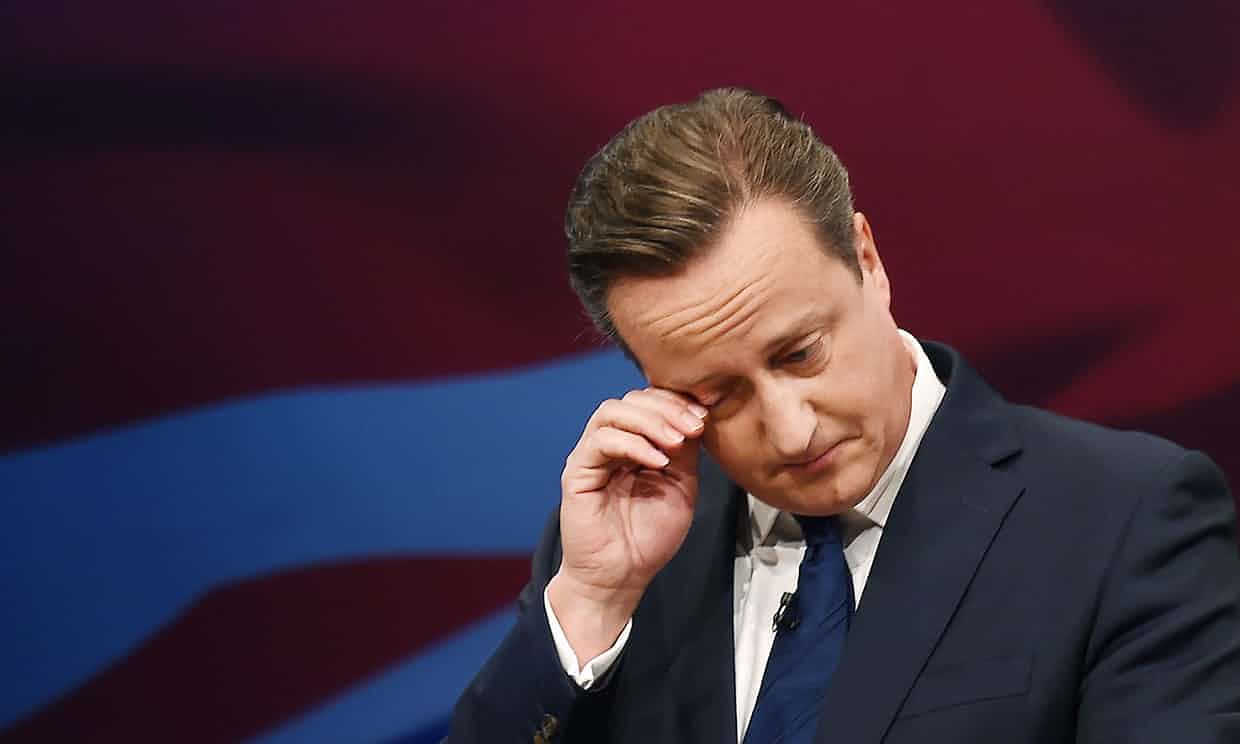 “Do you know,” asked David Cameron, “that in our country today, even if they have exactly the same qualifications, people with white-sounding names are nearly twice as likely to get callbacks for jobs than people with ethnic-sounding names?” This has, of course, been known, and widely reported for years.

It seems the Tory party faithful have somehow not noticed. Maybe that’s why, under Cameron, the body whose remit it is to end this discrimination – the Equality and Human Rights Commission – has had its budget slashed from £70m to £17m.

“One young black girl had to change her name to Elizabeth before she got any calls to interviews. That, in 21st-century Britain, is disgraceful,” declared Cameron. Well, those who want to bring claims against racist employers have had the rug pulled from under their feet, as funds for legal cases have been drastically cut. Indeed, when EHRC’s forerunner, the Commission for Racial Equality, was shut down in 2007, its budget was £20m. Now even less funding has to be shared between tackling discrimination against women, religious groups, gay people, the elderly, those with disabilities – and the upholding of human rights too.

So I waited to hear what the prime minister would do about the denied opportunities he claims to care about: and there was nothing. “I want us to end discrimination and finish the fight for real equality in our country today,” he said, with precisely zero words on how to achieve it.

This was in sharp contrast to his next, far longer, passage on Muslims where, after a long list of things he hates, he boldly declared: “If you are teaching intolerance, we will shut you down … People who organise forced marriages – I want them prosecuted. Parents who take their children for FGM – I want them arrested.”

Here was bold action, but not against discrimination. And in listing so many “evils” associated with Muslims, one was left thinking: maybe that’s why they might find it so hard to get a job.

David Cameron did exactly what Jeremy Corbyn failed to do a week ago. He reached out beyond those who already agree with him and sought to persuade those who don’t. He made a liberal case for prison reform and railed against racism, Islamophobia, stop-and-search and the gender pay gap. This wasn’t just a pitch for the centre ground, it was a pitch for the centre-left too.

Cameron is calculating that, with Labour having shifted leftwards, a vast swath of terrain has been vacated – and he intends to command all of it. He wants to speak for the right, left and centre of British politics, content to leave what he would regard as the hard left – albeit a hard left now expanded and rejuvenated – to Jeremy Corbyn and Labour.

By citing the longtime Labour voter who had written to him announcing his conversion to the Tories, and indeed with this entire speech, the prime minister was throwing down a challenge to liberal and even centre-left voters: What really, besides habit or ingrained prejudice, is preventing you from supporting me? There are plenty of answers to that question – his shameless branding of his Labour opponent as “Britain-hating” would be one, Theresa May’s assault on immigration would be another – but it is a sign of how much Cameron believes the landscape of British politics has been transformed, not least by Corbyn’s victory, that he feels he has every right to ask it.

Huskies, prepare to be hugged. David Cameron has decided to be David Cameron again, or at least the Cameron he was in 2005: the one that cares about prison reform and the working poor and the “disgraceful” fact that women with “ethnic-sounding” names get fewer responses to job applications.

Liberated from the need for re-election and emboldened by victory, the prime minister is determined to let the sun shine in again: the nation was saved, couples getting “married because of us” (gay couples presumably, but perhaps he’s just been watching Love Actually) and “we are moving into the light”. It was as if the crash and the cuts that derailed the Tory modernisers had never happened, and the next five years of austerity weren’t going to happen either. 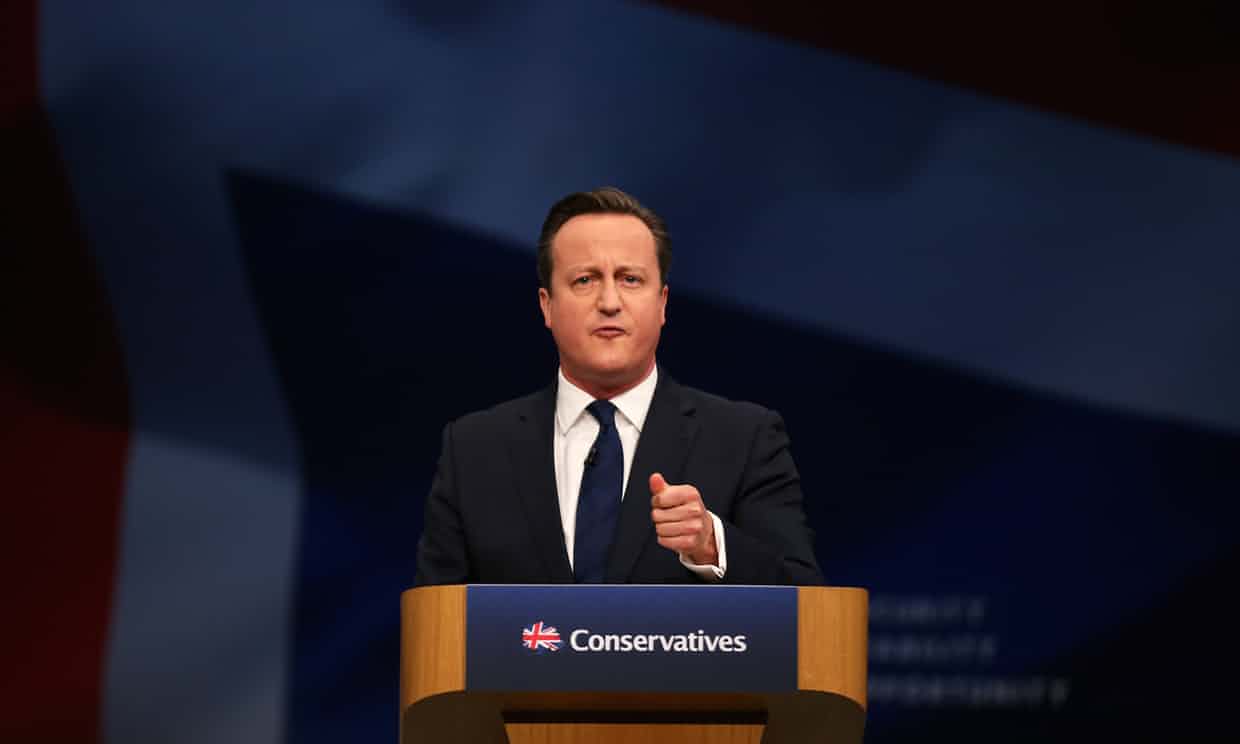 And so he ducked serious Tory concerns about tax credit cuts undermining their plans to woo blue-collar voters with a higher minimum wage and more affordable housing. That’s a problem deferred, not solved. He skipped pretty quickly over the Europe referendum, too.

This was a warm bath of a speech, soothing both to hear and deliver, which made his rivals look cheap; only Boris, perhaps, could similarly elicit a standing ovation by promising to end racism and sexism (even if it was unclear how). But the gap between rhetoric and reality is alarmingly wide.

After dancing on the graves of his defeated opponents – a victory jig to which he was entitled – and the sex jokes, came the big idea. Not just big, or great – but a greater Britain. An appeal to patriotic fervour and postcolonial nostalgia that betrayed not confidence but insecurity. In his insistence that there would be “no more little England”, and “less Britain-bashing”, he did protest too much. In the absence of anyone actually arguing otherwise, one could only conclude that the doubts he was dispelling were his own.

His criticism of the Labour leader, Jeremy Corbyn, and his “security-threatening, terrorist-sympathising, Britain-hating ideology” were over the top. It also sat uneasily with the love bombing that would follow as he sought to create a big Conservative tent that embraced Muslims, gay people, black people, women, children in care, social workers and the poor. One of his best moments was his riff on opportunity: “Opportunity doesn’t mean much to a British Muslim if he walks down the street and is abused for his faith.”

Rhetorically there were some impressive passages relating to equality of opportunity and tackling discrimination (though they sit uneasily with his record in government). Oratorically he wasn’t much better than Corbyn. Abrupt sentence endings, erratic pacing, a few awkward silences where the audience realised he’d delivered a line to clap to – when he brought it to a close he almost surprised himself.

“A greater Britain.” This was the phrase ringing in our ears as David Cameron stepped off the podium to rapturous applause. He used it 12 times. It’s one of those speechwriter’s nuggets that must have had them all high-fiving in the prime minister’s suite. Greater Britain is a particularly hardworking piece of rhetoric: not only is it a pun, it manages to convey both the Tory tradition of patriotism and the importance now being placed on the party’s one-nation credentials.

This speech will be seen as a huge, definitive lunge for the centre ground. In among some strong meat on extremism and a vicious attack on Jeremy Corbyn for his “terrorist-sympathising, Britain-hating ideology”, the passages that really stuck out were the ones on social issues. This is partly because it’s still incongruous for the leader of a party which once entertained the notion that society doesn’t exist to wax lyrical about poverty, life chances, and rehabilitation. But it’s also because of their length and prominence. Cameron was making an extended pitch to those chary of callous Conservatism – a marked contrast to Theresa May’s tougher-than-tough speech on immigration yesterday.

The soundbites may be seductive but Cameron should be judged on his government’s actions, not its posturing. The impoverishment of working people via cuts to tax credits hardly stands in the “great tradition of Conservative social reform”. Nor do the unprovoked attacks on trade unions. Cuts to local authorities such that some warn they may soon be unable to fulfil their statutory duties, including protecting children and the elderly, also undermine the thesis. Whatever the prime minister might want us to believe, at this rate the “great British take-off” won’t lift all of us up.

“The journey of a one -nation modern compassionate Conservative party”: so strong has David Cameron’s grip upon his tribe been since the election that he could have coaxed the activists into singing the Red Flag. Well, not quite. But this was a party leader at the height of his powers, relishing the experience.

There were moments of mischief, as when he thanked his bemused activists for their part in ringfencing the international development budget and legalising same-sex marriage. But the principal tone was almost valedictory as Cameron explicitly acknowledged that he is up against the clock.

The seeds of this speech, I believe, lie in the 2011 riots, an experience that shook Cameron to the core and persuaded him that he must confront the “big social problems” this country faces. Those public services still facing the scythe of austerity will protest that the PM does not put his money where his mouth is. But be honest: have you ever heard a party leader – let alone a Conservative PM – deliver such an impassioned attack upon discrimination?

And how many Conservative leaders before Cameron would have linked the battle to defend freedom on the beaches of Normandy with the struggles of gay pride? “Nothing is written,” said Cameron, a line borrowed from Lawrence of Arabia. No, indeed. Ten years since he became Tory leader, Cameron has not lost the ability to surprise.