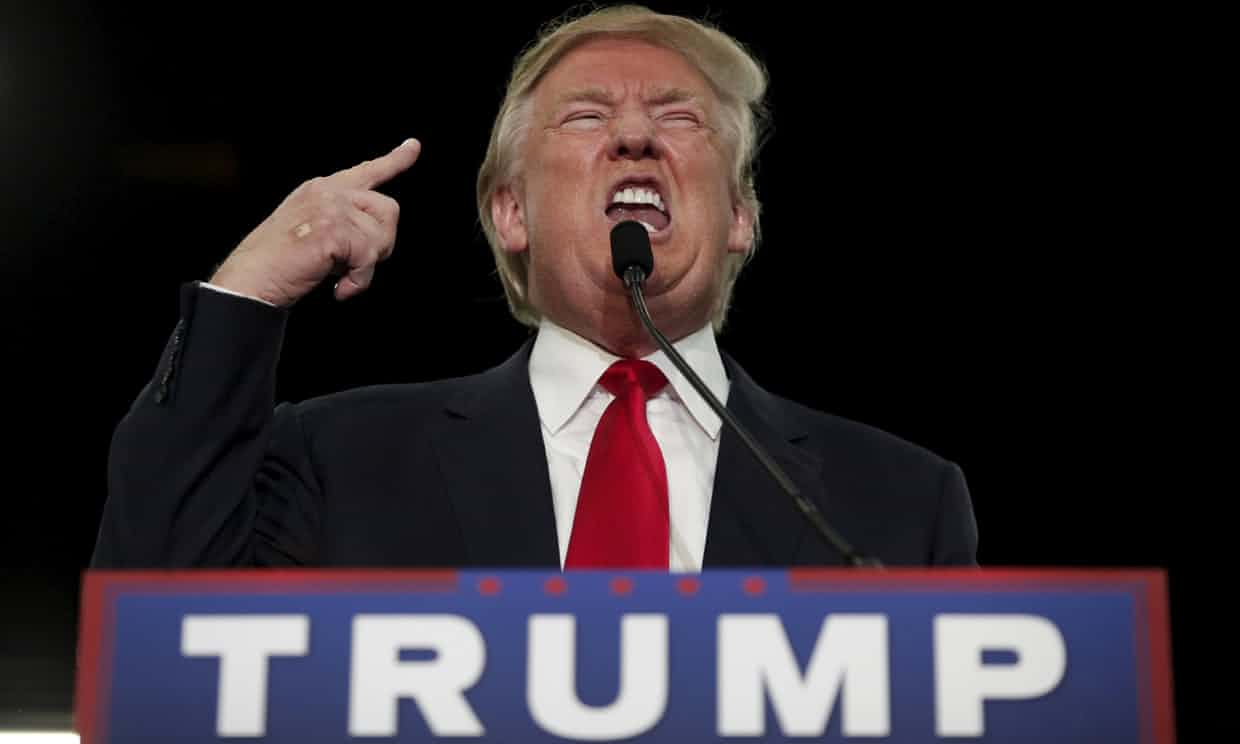 Donald Trump shows hate speech is now out and proud in the mainstream
The Guardian,
Photograph: Randall Hill/Reuters

Those who have been asking if it was necessary to take Donald Trump’s candidacy seriously finally have their answer.

The fact that he has topped almost every poll for the Republican nomination for the past four months was always being weighed against the obvious – he’s a buffoon, with a comb over as brazen, ridiculous and outlandish as his rhetoric. He has offended women, Mexicans, disabled people, Jews, Chinese and immigrants.

Those who saw him only as an entertainer kept waiting for his Republican audience to get the joke and move on to more plausible candidates. But on Monday, after he called for Muslims to be prevented from entering the US, his presence had become so toxic, even his most dismissive detractors could ignore him no more.

To cheers from the faithful, Trump read out a statement referring to himself in the third person: “Donald J Trump is calling for a complete and total shutdown of Muslims entering the United States until our country’s representatives can figure out what the hell is going on.”

Americans are used to such venom dripping from the lips of talk radio hosts and the occasional Fox News anchor. But to be uttered by the frontrunner for the nomination of one of the two main parties was more than many had bargained for. What once had been considered hate speech confined to the margins of political life is now out and proud in the mainstream. “Probably not politically correct,” Trump said afterwards. “But I don’t care”.

This is a large part of his appeal. He articulates the frustration and bewilderment of that section of uneducated, unskilled, low-paid white America, whose wages have stagnated and social mobility has stalled that is nostalgic for its local privileges and global status. In recent times, they have lost wars, jobs, houses and confidence.

So when he brands Mexicans “rapists”, Chinese “cheats” and all Muslims potential threats he gives free rein to their insecurities about an increasingly cosmopolitan and less predictable world they feel they have been excluded from.

To that extent, his base is not too different from that of the Front National, which just triumphed in the French regional elections, Ukip or any of the range of far-right parties currently making headway in Europe.

“Minorities are the flashpoint for a series of uncertainties that mediate between everyday life and its fast-shifting global backdrop,” writes Arjun Appadurai in Fear of Small Numbers.

“This uncertainty, exacerbated by an inability of states to secure economic sovereignty in the era of globalisation, can translate into a lack of tolerance of any sort of collective stranger.”

Trump was responding in part to shootings in San Bernardino, California, where a Muslim couple, claiming to support Islamic State, killed 14 people. The mass shooting – the 353rd this year – was defined by the FBI and Barack Obama as a “terrorist incident”.

For those who see the presence of Muslims – and not the easy accessibility of guns – as the central threat the shooting represented not the routine occurrence of gun violence in the US but a particular pathology stoking a lurking fear.

Trump did not invent Islamophobia in the US. In a Pew research poll from last year, which asked people to rate different religions from 0 to 100 – with higher numbers suggesting more positive feelings, Islam came last with 40, just behind atheists (41) and way down among Republican voters (33).

Indeed, while Trump’s fellow Republicans rounded on him on Monday, few expressed outrage just two weeks ago when he proposed a database to track Muslims living in the US. Nor was he alone in advocating discriminatory measures.

Ben Carson, one of his main contenders for the nomination, suggested Syrian refugees should be screened as though they were “rabid dogs”. Meanwhile, two other Republican hopefuls, Texas senator Ted Cruz and former Florida governor, Jeb Bush, both suggested prioritising Christian refugees from Syria first.

But while the race to the bottom has long been on, Trump was always uniquely well positioned to win it and leverage anti-Muslim bigotry for electoral gain. One poll, earlier this year, showed Trump’s supporters are among the most negative towards Muslims among Republicans, with 77% of his supporters believing “the values of Islam are at odds with American values and way of life”.

Few among his Republican challengers were ever prepared to challenge him head on. When they did, it seemed to do little damage, which allowed his bigotry to fester in the public square.

His support, which had been waning until the Paris attacks, has since shot up – as have the number of Islamophobic attacks in the US. So while his comments drew a stern rebuke from across the political spectrum, it remains to be seen if they will do him any harm. The more the establishment round on him, the more his supporters hail his outsider status and celebrate the notion that he is breaking a taboo.

The fact that his xenophobic binge has done little to damage his status among the Republican faithful says a great deal about the party. But the narrow question of what these outbursts do to his electoral prospects is secondary to the damage they are clearly doing to American political life.

Once discrimination on this scale enters the political market, it debases the currency of a democracy and leaves everything weaker and everyone more divided. He wouldn’t be the first political figure to make the transition from ridiculous to dangerous before the media and political elites realised the joke was really on them.