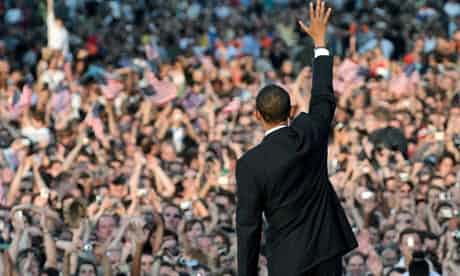 Europe's Obamaphilia says more about its own weakness than the US president
The Guardian,
Photograph: Rainer Jensen/EPA

In his book Audacity of Hope, Barack Obama described himself as a Rorschach test – the famous psychological experiment where people are shown a series of ink blots and asked to identify what they see in them. There is no right answer. But each response in its own way, is thought to reveal the patient's obsessions and anxieties.

So it is with Obama. In the last week he has been disparaged as the "most successful food stamp president in history" by Newt Gingrich and a spineless "black mascot" of Wall Street by the prominent black academic Cornel West.

"I serve as a blank screen on which people of vastly different political stripes project their own views," he said. "As such I am bound to disappoint some if not all of them."

But one of the most curious things about those who support him most is not their disappointments – given their high hopes for him, that's to be expected – but their enduring devotion in the face of those disappointments. It's as though each single disillusionment is consumed as its own discrete letdown. String them together and you have not a narrative of failing to deliver on promises, but a litany of isolated, separate chapters – each with its own caveats, exceptions and explanations.

This has long been true of black voters in the US, who somehow manage to feel more optimistic about America than ever, even as they are doing worse in it. Unemployment, poverty and foreclosure rates have risen to rates far higher than under George Bush, and the gap in opportunities between blacks and whites increases. Nonetheless, black Americans remain Obama's most loyal base. They are suffering from 16% unemployment, but they continue to give him 80% approval.

The same apparent contradictions underpin European attitudes to Obama, which have barely changed since his emergence as a credible presidential candidate. A Pew research poll published in July 2008, before the elections, revealed that Obama was more popular in Europe than any other continent, including North America.

In Germany, France, Spain and Britain, more than 70% said they trusted Obama "to do the right thing in world affairs" and more than half believed a new president would change US foreign policy for the better. While just 19% of Europeans interviewed in a German Marshall Fund survey in 2008 supported Bush's handling of international affairs, 77% approved of Obama's foreign policy a year later.

In September 2009 Craig Kennedy, the fund's president, argued: "I suspect that, as real political decisions have to be made, we will see 'Obama euphoria' fade as the Europeans begin to see him more as an American and less like themselves." But that hasn't happened. Three years later he leaves home – where, even after Osama bin Laden's assassination, approval ratings hover around 50% – and lands in a continent where more than 70% think he's doing a good job.

The strange thing is that much of what Europeans loathed about the Bush era remains intact even as Obama prepares to run for a second term. Guantánamo is still open, rendition continues, there are more troops in Afghanistan and still troops in Iraq.

This could be overstated. Obama's statement on the Middle East last Friday shifts US policy on the region closer to Europe's than it has been for more than a decade. But that wouldn't be the first time he's delivered an impressive speech and then failed to follow through.

Moreover, Europe is implicated in many of the areas where foreign policy has stalled. Part of the problem with Guantánamo is that European governments refused to take many of the prisoners. Some applauded America's intensification of the war in Afghanistan even as they planned to unilaterally draw down their own troops.

Either way, Obama's principal defence abroad, as it is at home, is that things were bad when he arrived and would be worse if he went. This is true. But it falls far short of the inspiring rhetoric that accompanied his rise to power. Not so much "Yes we can" as "Could be worse".

European political elites have long been frustrated. "Maybe this is an overstatement, but I see this [European tour] as an opportunity for a reset of the European relationship," Heather Conley, director of the Europe programme at the Centre for Strategic and International Studies, told the Washington Post. "European leaders have really been struggling with where they fit. They had enormous expectations for this president, but they're now wondering, 'Is it that different after all?'"

But this has yet to filter down in any discernible way. So when he has delivered so little, why do Europeans love him so much? Many of the original reasons still stand. He still isn't George Bush, although how long that negative qualification remains meaningful is a moot point. He also emerged at a moment when European political leadership has been in a particularly parlous state. Europeans don't just love Obama more than Americans do. They love him more than they love the people they have elected themselves. One reason Obama is so popular in Europe is partly because he has emerged at a time when European leadership is in such a parlous state. Less than a third of the Italians and French, respectively, approve of Silvio Berlusconi and Nicolas Sarkozy, only half the Germans find Angela Merkel credible. David Cameron does not fare much better.

Smart, charismatic, telegenic and unencumbered by sleaze Obama still, by comparison, represents the possibility of a popular form of electoral politics led by intelligent and public-spirited citizens as opposed to opportunists, egomaniacs and sleazemongers. It's as though his proven ability to articulate the source and scope of problems has enabled some people to look past his inability to provide a solution for them.

But in many ways Europe's Obamaphilia has always been as much a reflection of its weaknesses as his strengths. Like royalists in search of a benevolent monarch in whom they could invest great hopes but over whom they had no democratic control, they have sought not to leverage their own power but instead to trust in somebody else's.

And those weaknesses have grown. In the continuing fallout of the financial crisis, the continent is struggling to keep itself together. Greece and Ireland are on the brink of default, Portugal is up for a bailout and Spain is in revolt. The fate of the euro has been openly questioned.

And while many of the problems that dogged transatlantic relationships remain, almost everything else has changed. The Arab spring laid bare both the US's and Europe's waning influence on the world, while demands to retain the chairmanship of the IMF smack of anachronistic entitlement against the rising power of more dynamic developing economies.

European's attitudes towards Obama tell us more about Europe than they do about the US president. And what they say about both is not particularly impressive.