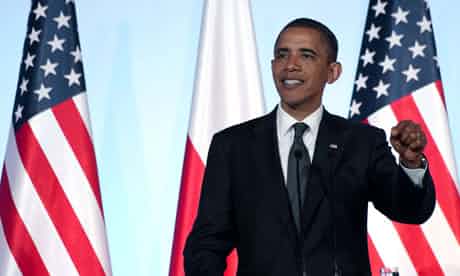 It's not the Republican line-up but the economy that Barack Obama must fear
The Guardian,
Photograph: Nicholas Kamm/AFP/Getty Images

On 27 April Barack Obama produced his long-form birth certificate and denounced the "sideshows and carnival barkers" who insisted he was not born in the US. Within a week he had announced Osama bin Laden's execution to the world, burnishing his credentials as commander-in-chief and leaving the carnival barkers to howl at the moon.

Watching the declared Republican presidential hopefuls debate in New Hampshire last week it was difficult to perceive any threat to the apparently unassailable position he had established almost two months ago. The most viable Republican contenders – Mike Huckabee, Mitch Daniels and Chris Christie – have all decided not to run. Meanwhile, the calibre of those who have taken up the challenge suggests the sideshow has been promoted to the main event.

There was Newt Gingrich, who had effectively just been fired by his own handpicked staff; Mitt Romney, railing against the very healthcare proposals he implemented when governor of Massachusetts; and Herman Cain, conservative radio host and former pizza executive, who insists any Muslim would have to take a loyalty oath before they could work in his administration. Among this field even Michele Bachmann – a Tea Party favourite who once claimed that The Lion King could be used as gay propaganda – emerged looking reasonable.

Republicans themselves are underwhelmed. A recent NBC/Wall Street Journal poll showed that only 45% of Republican voters who said they plan to participate in the GOP primaries were satisfied with their choices. At the same point in the election cycle four years ago the figure was 73%. That's why, at this relatively late stage, the party is still desperately seeking a halfway decent candidate and why so many prominent potential candidates (halfway decent or not) have yet to declare their hand. A poll last week showed the most popular Republicans are Romney, Sarah Palin and Rudy Giuliani. The last two are not yet running and are unlikely to.

Many liberals witness this spectacle with a wry smile, assuming that if this is the best the Republicans can come up with, Obama's lease on the White House is good for another four years. But the last laugh could be on them. And a very sick joke it could be too.

In 2004 Bush showed us that being wrong, stupid and incompetent is no bar to being elected to the highest office in American politics (or any politics for that matter). Put even more bluntly: just because they're ridiculous doesn't mean they can't win. And the only thing more startling than the lack of Republican talent at this stage of the race is the fact that whoever gets the nomination has a fighting chance. Because, however weak the Republican field appears, Obama is looking weaker by the day.

A Gallup poll from last week has Obama losing against a generic Republican candidate by 39%-44%; in March, when he launched his re-election campaign, a Pew survey had him leading by 10 points. One poll shows that today he would be in a dead heat in a national contest against Romney, the Republican frontrunner; in January polls showed he would have beaten Romney in all six swing states surveyed.

Immediately after the first Gulf war, the late June Jordan, a prominent poet and peace activist, was asked to explain why George Bush Sr's approval ratings were higher than Harry Truman's after the second world war. "I suggest to you it's a hit the same way that crack is," she said. "And it doesn't last long."

Obama's high from Osama bin Laden's execution wore off within a month. Now his approval ratings are back where they've been for most of the last 18 months, below 50%.

The basic reasons for this are identical to those that rendered Bush Sr a one-term president: the economy. The raft of recent data suggesting stubborn unemployment, a collapsed housing market and elusive growth has coincided with rising gas prices and a stock market in virtual freefall. Of the nine states that Obama took from Republicans in 2008, unemployment is up in all of them by, on average, a third. Obama supporters like to counter these facts by reciting a list of his achievements , thereby utterly missing the point. A list never clothed or housed anyone or fed their kids.

The issue of who is to blame for this economic crisis and what Obama could have done differently is a crucial one that has been discussed before in this column. The point is not to explain the causes of his electoral vulnerability, but to lay bare the extent and nature of it.

The good news for Obama is that it is early days yet and things can change. At this point in 1983 Reagan trailed Walter Mondale, and in 1995 Bill Clinton was losing to Bob Dole. Both won landslides.

The bad news is things could change for the worse. There is little to suggest that the economy will improve much between now and November of next year, and much to indicate it could further deteriorate. With the Republicans in control of the House the days of even inadequate fiscal stimulus are over. Meanwhile, cuts at a local and state level, where budgets have to be balanced, are biting even deeper.

Those who believe Obama's defeat unthinkable should remember that his victory was nowhere near as emphatic as it appeared. Despite his strengths as a candidate, superior funding, a well-run campaign, the economic crisis and the failures of his Republican predecessor, he only got 53% of the vote. True, there were 192 electoral college votes between him and McCain. But 73 of those – Florida, Ohio, North Carolina and Indiana – were won with just 52% of the vote or less.

Those who assume that, given the field, the nomination of a viable Republican candidate is unthinkable should bear in mind the increasingly polarised nature of the electorate, and the fact that the Republicans could well choose someone who only appeals to their base and remain in contention. With relatively few waverers to win over, the task for the last three elections has not been to win over moderates but to mobilise the faithful.

The midterms show there is a limit to this strategy. The Republicans lost some seats by selecting extreme candidates. And the more conservative a candidate they select the more Democrats are galvanised, not in support of Obama but against the alternative.

But the bottom line is that Republicans nonetheless won big in November with many more extremists, primarily because Democrats stayed at home. Notwithstanding the paucity of decent Republican candidates, a significant enthusiasm gap remains.

As the 1980 election campaign drew to a close, Reagan famously ended a debate with the questions: "Are you better off than you were four years ago? Is it easier for you to go and buy things in the stores than four years ago? Is there more or less unemployment in the country than there was four years ago?" Obama's opponent would merely have to repeat the questions verbatim to recast him as Jimmy Carter 2.0.

If you want to know how Obama will fare next year, don't watch the Republicans, watch the economy.