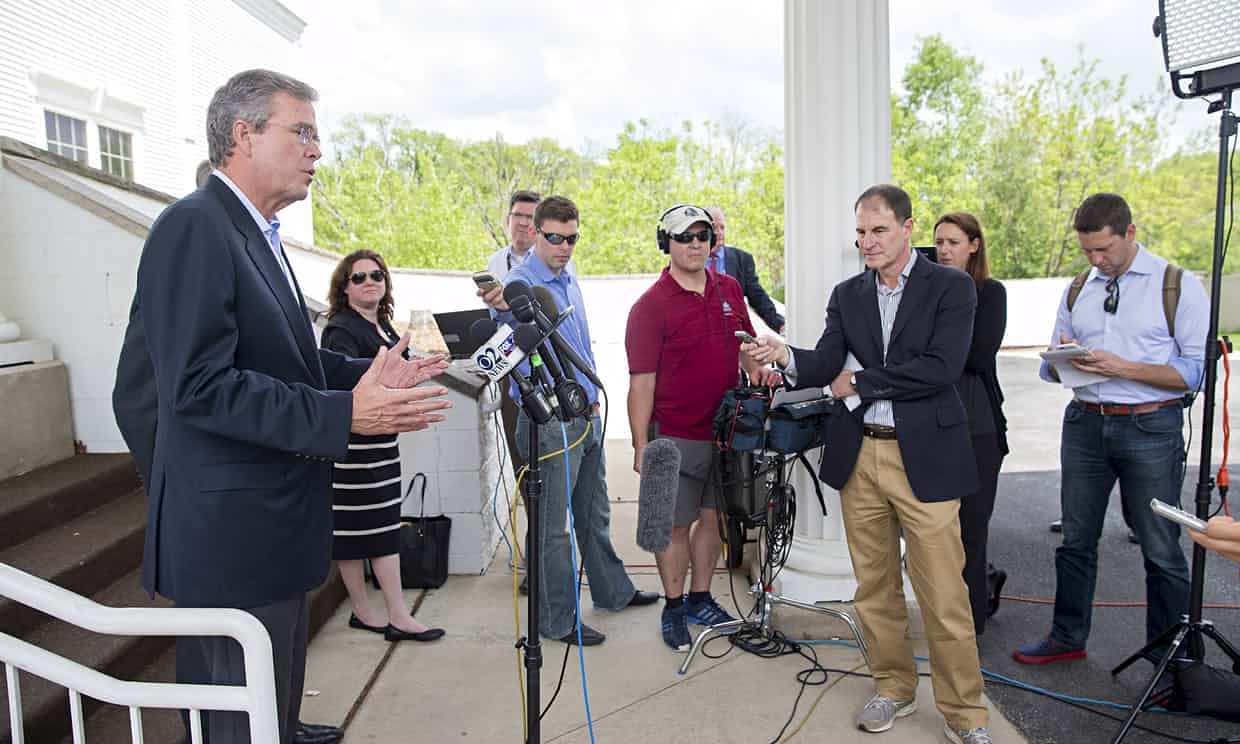 Far from facing the truth, the US is telling new lies about Iraq
The Guardian,
Photograph: Aaron P Bernstein/Reuters

A couple of weeks ago, the Republican presidential hopeful Jeb Bush was asked in an interview with Fox News whether, knowing what he knows now, he would have invaded Iraq. It’s the kind of predictable question for which most people assumed he would have a coherent answer. They were wrong. Jeb blew it. “I would have [authorised the invasion],” he said. “And so would have Hillary Clinton, just to remind everybody. And so would almost everybody that was confronted with the intelligence they got.”

For the next few days, as he was hammered from left and right, he flailed around like a four-star general in search of a plausible exit strategy. In a number of do-overs, he answered the same question with “I don’t know”, “I didn’t understand the question”, and “no” before finally falling back on the perennial Republican default of blaming everything on Barack Obama.

“You can tell a true war story by the way it never seems to end. Not then, not ever,” writes Tim O’Brien in his novel about Vietnam, The Things They Carried. “In a true war story, if there’s a moral at all, it’s like the thread that makes the cloth. You can’t tease it out. You can’t extract the meaning without unravelling the deeper meaning.”

Iraq is one such story. The troops may have left, but the fallout from the conflict lingers in the American polity, clinging to its elites like stale cigarette smoke to an Aran sweater – it stinks, and they just can’t shake it. Not only did it trip Jeb up, it remains the abiding, shameful legacy of his brother George Bush’s administration. And, as Jeb hinted, it dogged Clinton during her 2008 presidential bid, too.

Back then, she claimed if she’d known what George Bush would do with the authority to go to war (ie go to war with it) she would never have given it to him. That didn’t fly. Now she concedes her vote was an unqualified “mistake”.

Extracting a moral from this disaster would demand “unravelling the deeper meaning” of America’s military impulses, the popular consent it enjoys and the craven political assent it is accorded.

It would require an assessment of why so many Americans supported the war for so long, how an ostensibly independent media not only failed to challenge the state but actively capitulated to it, and why nobody has paid the price for any of these mistakes. In short, it would demand a reckoning with American power – how it works, as well as whom it works for, and to what end. (Britain’s pathetic collusion demands a whole other column.)

In the absence of such an account, a true war story is not possible, and so the political class would rather collude in a huge lie that will continue to infect the US body politic, as Vietnam did, until it finds remedy in the truth.

The point here is not to relitigate the war. The verdict on that front is clear by the number of those who once endorsed it and now disclaim it. The point is to reclaim the truth of the past in the hope of a better and more honest future. If those who lied us into the war can lie us out of it too, then we are no better equipped to stop them the next time.

Jeb’s mistake is that he picked the wrong lie. It’s simply not true that “almost everybody” who saw the intelligence backed the war – 133 representatives and 23 senators opposed it. Nonetheless, his rationale – worthy of any hapless teenager – that he would have done it because everybody else was doing it has more integrity than most.

Many of those who supported it did so in an act of cowardly political calculation. Raising their index finger to the political wind and the middle finger to international law they thought: “This is going to happen, so I might as well get on board.”

Opposing the war in 2003 struck those with more ambition than principle as a career-ending act of folly. The administration was selling lies; but they were willing buyers.

Broadly speaking, the public was of the same mindset. The most important single factor shaping Americans’ opinions about any war is not American casualties, foreign casualties or even expense, but whether they think America will win, says Christopher Gelpi, a political science professor at Duke University who specialises in public attitudes to US foreign policy. Sure enough, on the eve of the invasion two thirds of Americans backed it and a slim majority said they’d supported it without a UN resolution. Support grew once the bombing started and only soured once it was clear no victory was in sight.

The falsehood peddled by most of Jeb’s critics amounts to this: “I wouldn’t support it now because now we know the intelligence was faulty. But there’s no way we could have known that then.” Or as New York Times columnist David Brooks, one of the most eminent stenographers for American state power, put it: “To erase mistakes from the past is to obliterate your world now. You can’t go back and know then what you know now.”

The trouble with this is that we did know then. The world knew, which is why majorities in almost every other country opposed it. The United Nations was trying to acquire proof one way or another but was not allowed to finish the job. Politicians were not, in fact, led to war by faulty intelligence; they deliberately commissioned the intelligence that would enable them to go to war.

According to notes taken by Steve Cambone, aide to the former defence secretary Donald Rumsfeld, just hours after the 9/11 attack Rumsfeld demanded: the “best info fast ... judge whether good enough [to] hit S.H. [Saddam Hussein] @ same time – not only UBL [Osama bin Laden].” The Pentagon’s top lawyer was told “to talk w/ PW [Paul Wolfowitz] for additional support [for the] connection w/ UBL.” “Need to move swiftly,” Cambone noted. “Go massive – sweep it all up things related and not.”

America got the war it wanted; it just wasn’t the war it expected. “History will allow clear judgments about which leaders and which institutions were up to the challenge posed by Saddam,” Brooks wrote the week of the invasion, “and which were not.” History has spoken. Sadly, too many still suffer from selective hearing.