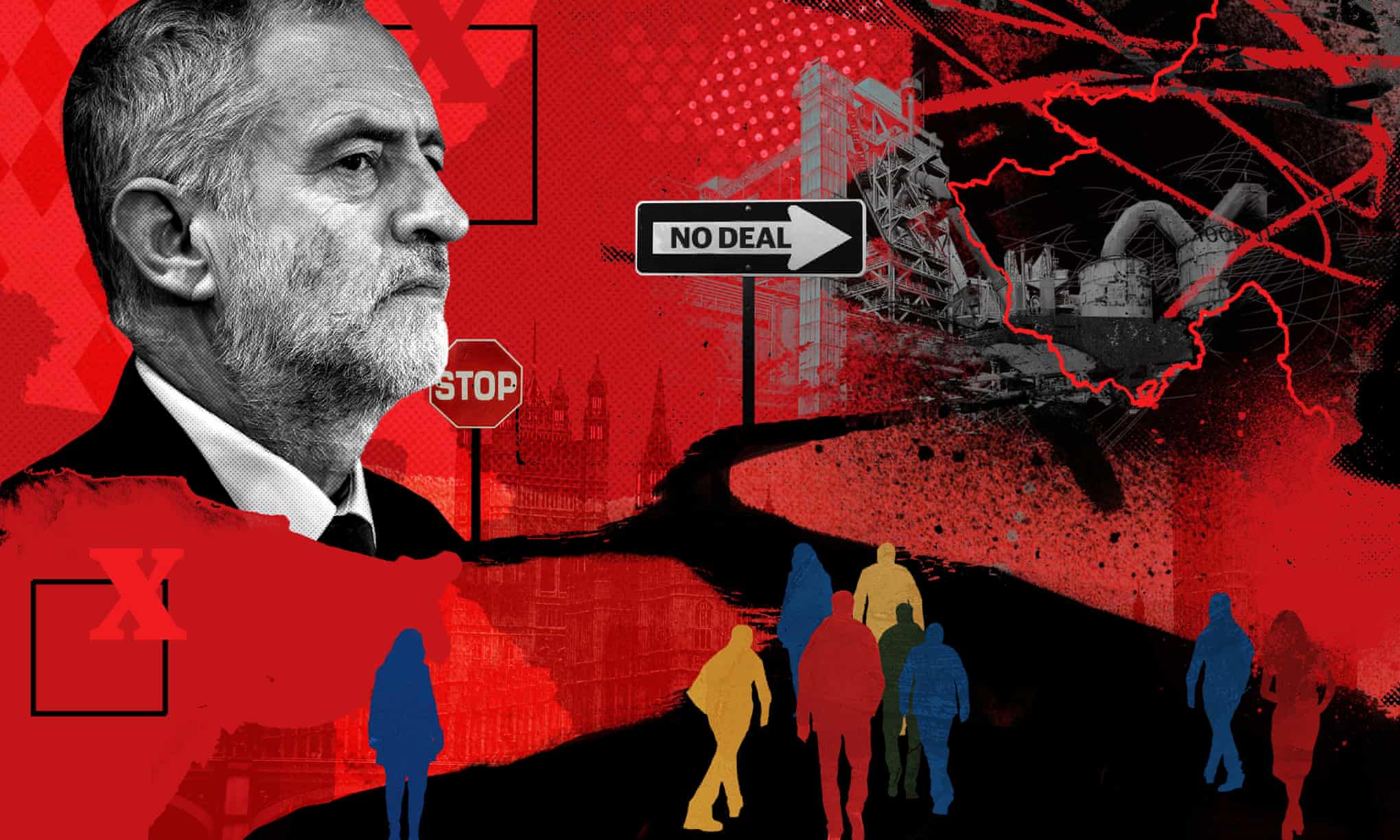 For those who want to stop no deal, Jeremy Corbyn is the only hope
The Guardian,
Illustration: Eleanor Shakespeare

Departing Tory leaders have developed an odd and presumptuous habit of demanding that the leader of the opposition resign too. “As a party leader who has accepted when her time was up,” Theresa May told Jeremy Corbyn in her final prime minister’s questions, preparing to leave her party to Boris Johnson and the country without a prayer, “perhaps the time has come for him to do the same.”

In 2016, David Cameron – who had called a referendum lost it, only to then break his promise and abandon the country in a moment of self-inflicted crisis – suggested Corbyn’s resignation would be a patriotic act. “It might be in my party’s interest for him to sit there. It’s not in the national interest. I would say, for heaven’s sake, man, go.”

Stranger still, many Labour parliamentarians agreed with them: Cameron’s speech took place in the middle of a full-blown, if woefully inept, coup.

When the 2017 exit polls on election night suggested that Labour had far exceeded expectations, increasing its vote share and seats while the Tories lost their majority, a BBC documentary showed the muted response of several Labour MPs. They were shocked not into jubilation, but silence; they had looked forward to his defeat, removal and “party renewal” even if it meant they had to go down with him. The former leader Tony Blair, meanwhile, put his head in his hands and said he didn’t understand this country any more.

The political and media establishments are still struggling with the choice the Labour party made in 2015. The fact that the decision was emphatic, had to be made twice following the failed coup, and was effectively endorsed by the electorate in 2017, has not been enough. On some level, that goes beyond the political to the psychological: they refuse to accept his tenure as legitimate.

This sense of denial runs deep – as though insisting he should not be the party leader in effect means he’s not. It is a delusion that recalls the author Doris Lessing’s observation of Blair’s declarative approach to politics: “He believes in magic. That if you say a thing it is true.”

Corbyn is the leader of the Labour party. He has a mandate. He represents something other than just himself. That is not a statement of opinion but of fact. One does not have to like it to accept it. But the failure to accept it will have material and strategic consequences. And, with a general election imminent and the future of the country’s relationship with Europe finely balanced, the moment of reckoning with that fact is long overdue. For there is no route to a second referendum without Labour; there is no means of defeating Johnson without Labour. The party remains the largest, and by far the most effective, electoral obstacle to most of the immediate crises that progressives wish to prevent. Once again that is not a case for Corbyn or for Labour, but for reality.

Earlier this week, when asked which was worse, a no-deal Brexit or Corbyn as prime minister, the Liberal Democrats’ Scotland spokesman, Jamie Stone, said: “It may be that somebody else may emerge from the Labour party. I think the ball is very much in the Labour party’s court to see what alternatives they could find.” 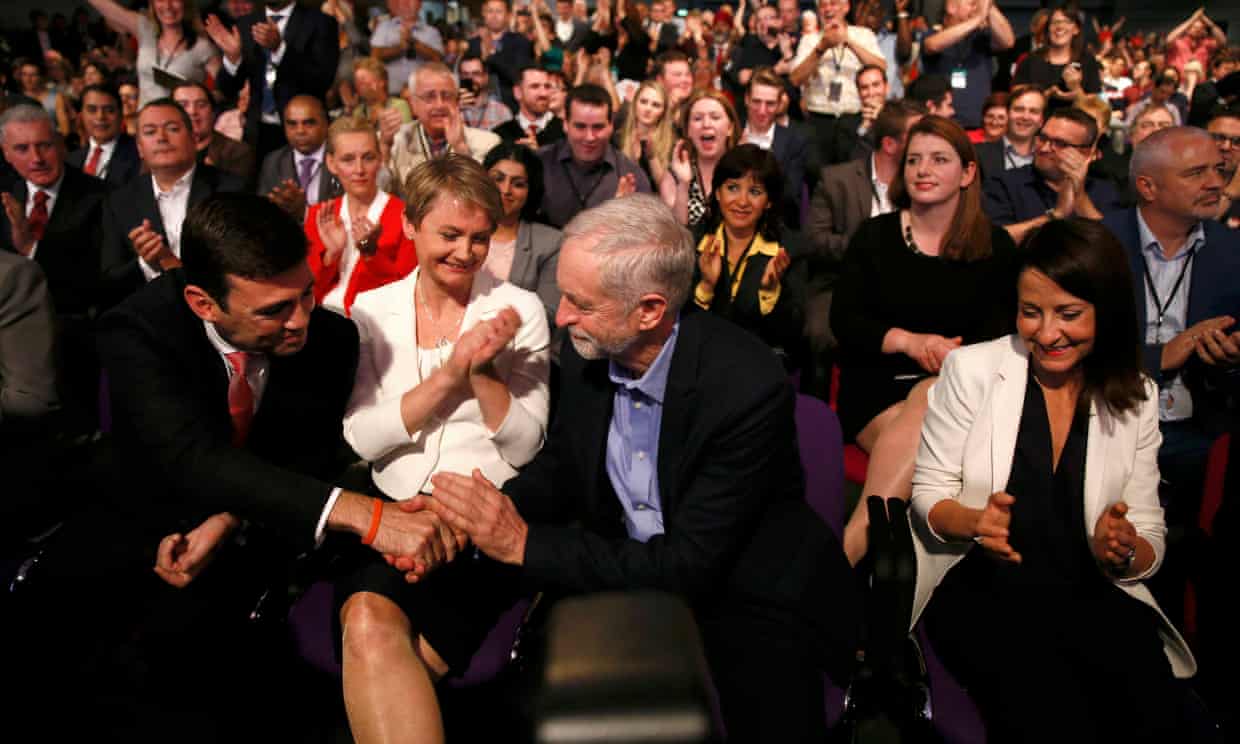 ‘The political and media establishments are still struggling with the choice that the Labour party made in 2015.’ Jeremy Corbyn is congratulated on winning the Labour leadership in 2015. Photograph: Stefan Wermuth/Reuters

That is not going to happen. Liberal Democrats don’t get to choose the Labour leader. Labour does. The Lib Dems have long struggled to understand this. In 2010 Nick Clegg said he could work with Labour, just not Gordon Brown. Two years later they said they could work with Labour but the shadow chancellor Ed Balls must go.

The insistence that Labour couldn’t get the numbers in parliament to oust Johnson and make Corbyn a caretaker prime minister is a self-fulfilling prophecy made most ardently by those who won’t give him the numbers. But even if it wasn’t, it is a fallacy to assume that anyone else would get any closer. When pressed on which he would prefer – “Is it Jeremy Corbyn or is it no deal?” – Stone eventually showed his cards. “It is no deal every time.”

There is candour in this. It is effectively the position of his party and many others, including a few disgruntled Labour members, for whom a potential Labour government under Corbyn is somehow worse than the actual no-deal Brexit under Johnson that may soon happen. But there is a clear contradiction too. Some of those who have devoted the past few years to stopping any kind of Brexit now claim that the only thing worse than a no-deal Brexit – the worst kind of Brexit they could possibly imagine – is the leader of the only party that can stop a no-deal Brexit.

None of this is a reason to necessarily support Labour or Corbyn. There are all sorts of reasons, from antisemitism to an insufficiently pro-European stance, as to why progressives might decide not to back Labour at this moment; and the calculations are very different outside England and in those areas where tactical voting offers the best hope of getting rid of Conservatives. And given the redistributive agenda that Labour laid out at last week’s conference, there are all sorts of reasons why progressives might back it, too.

Political parties are not entitled to anyone’s support. They must earn it. The moment they start blaming voters for not supporting them, they are sunk. That’s as true for Labour under Corbyn as it was for the US Democrats under nominee Al Gore. But that does not absolve the voter from the strategic and moral responsibility of accounting for their vote.

In the second round of the French presidential elections in 2002, which pitted the conservative Jacques Chirac against the far-right candidate Jean-Marie Le Pen, a Communist party local councillor, François Giacalone, voted for the conservative. “When the house is on fire,” he said, “you don’t care too much if the water you put it out with is dirty.”

Right now, the house is on fire. Johnson’s first couple of months in office have illustrated that what’s at stake is not a contest between bad and worse. This is a leader who uses the police as props; breaks the law to undermine democracy; and stokes division with rhetoric that can and has been easily co-opted by the far right, pitting a section of the population against parliament and the judiciary. Johnson’s cabinet and its agenda, both with regards to Brexit and beyond, do not represent a mere shift to the right but a paradigmatic sea-change in British politics that, where Europe is concerned, may have irreversible consequences.

Those who last year were literally on the fringe of the Tory party conference have this week been running the show. The coming election will not just be about opposing Brexit – it’ll be about defending democratic norms. The key consequence of understanding that Corbyn is the legitimate leader of the Labour party is understanding that this fire cannot be extinguished without him.