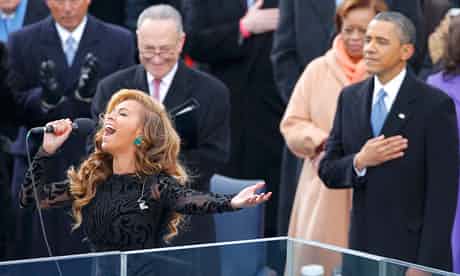 From Beyoncé to horse meat to Lance Armstrong, we have to care about this contempt for the public
The Guardian,
Photograph: Jim Bourg/REUTERS

In the science fiction film The Matrix, all-powerful machines transform the planet into a huge computer simulation where humans exist only in a dream world. Among the few sentient "free" people left fighting the machines is Cypher, who abandons the struggle following a revelation: he actually prefers the simulation to reality.

"I know this steak doesn't exist," he says. "I know that when I put it in my mouth, the Matrix is telling my brain that it is juicy and delicious. After nine years, you know what I realise?" He chews the steak ostentatiously and sighs. "Ignorance is bliss."

Over the past few weeks it seems as though this dystopian future has come early and Cypher would fit right in. Whether it's Beyoncé lip-synching the national anthem at the presidential inauguration, British shops selling beefburgers laced with horse meat, or Lance Armstrong doping his way into the record books, what you see, taste or hear is not necessarily what you get.

These moments of deception go beyond sport and showbusiness. They are emblematic of a culture where marketing trumps substance, cynicism triumphs over sincerity, and what is fake is openly and actively promoted over what is true.

Authenticity and transparency, it turns out, are just two options among many. Worse still, we all too often actively collude in the deception on the grounds that the version of events that has been curated for us is preferable to the truth.

These examples, it should be stressed, are not equivalent. Beyoncé mimed to the sound of her own recorded voice; Armstrong broke the law, lied about it and then choreographed his confession; British consumers were given contaminated meat courtesy of foreign farmers, pliant retailers and lax regulations.

Nor are any, individually, the source of moral panic, not while there's bombing in Mali and civil war in Syria. These instances may have left many upset – but none dead. Even the health implications of the burger scare should be put into perspective. Worse things have long made their way into the food chain with nary an outcry – as Eric Schlosser pointed out in 2001, in Fast Food Nation: "There's shit in the meat".

Not all deceptions are equal; but they are all deceptions nonetheless. Indeed the only things they have in common are their brazen duplicity, contempt for the public, and the erosion in trust they engender.

Take Beyoncé. Lip-synching is apparently common at big events, particularly when it's cold, as that can harshly affect the voice. She recorded the anthem days earlier (a safety track is routine for inaugurations) and used it because she arrived too late to rehearse with the Marine Corps band. The recording of her voice was then married to the recording of the band. What's the big deal?

Well, it makes a difference. If it was as much of an honour to be performing at the inauguration as Beyoncé claimed, she might have found time to rehearse at least once. Moreover, the essence of a live performance is the understanding that the audience is experiencing the event in real time and anything can happen. It is that combination of synchronicity, spontaneity and frailty that gives live performances their edge – it's the one take that matters.

"It's always hard for a guitar player to play when it's cold because your hands sort of stiffen up and you know nerves tend to do that to you anyway," said James Taylor, who played live at the inauguration. "So I was very relieved to have gotten to it without any major train wrecks." Beyoncé's talent is beyond doubt; what we'll never see is her ability to rise to that particular occasion.

"The synthetic perfection of faux-live performance may enjoy an appealing gloss," argued the Wall Street Journal's Eric Felten after the 2009 inauguration. "But you can say the same thing about supermarket apples – and we know how good they taste. One of the main challenges of the organic food movement has been to get people to see past the scuffs and dents and blemishes of honest produce, to focus on authentic flavours."

But all of this would have been insignificant if we'd been told beforehand rather than having to find out. Instead we were treated to Potemkin on the Potomac: the band members pretended to play, the director pretended to conduct, Beyoncé pretended to sing, and everybody involved pretended they didn't know for several days. Lip-synching may not be a crime, but the cover-up was definitely heinous.

So while too much can be made of it – it's not a metaphor for how we got into Iraq or, as some conservatives claimed, Obama's record – it is more troubling how nonchalantly some shrugged it off. And there is considerable danger in making light of it. For these skills are transferable.

Clem Whitaker, the co-founder of America's first political consulting firm, once said there are two ways to interest the average American in a political campaign: put on a fight or a show. "So if you can't fight, put on a show! And if you put on a good show, Mr and Mrs America will turn out to see it".

Civil rights leader and cable TV host Al Sharpton hailed her miming as "the patriotic thing to do"; Anderson Cooper of CNN, whose catchphrase is "keeping 'em honest", said: "It is Beyoncé's world and we are just living in it."

Our expectations are so lowered that we reckon on being lied to and those in power reckon on lying to us. The only issue left is how much they can get away with it. "At the end of the day does the audience really care if they get a good show?" Bertram van Munster, executive producer of The Amazing Race, last week told USA Today in reference to docusoaps.

But they should, lest indifference and scepticism become our default positions. When beefburgers may or may not contain beef, and all feats – sporting, musical or otherwise – are discounted for doping and lip-synchs, we should be concerned.

When Beyoncé sings at the Superbowl next month, we'll wonder. The next inauguration we'll wonder. Words we thought we understood – "live", "beef", "world record" – become depleted of meaning. What we see is no longer what we get, but what we're given and what we know is only what we're told. Ignorance may be blissful, but it's still ignorance.