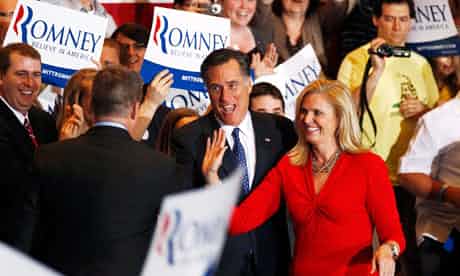 Finally, after several months and untold millions of ad-spend dollars, the Republican party's "inevitable" nominee, Mitt Romney, acquired an aura of inevitability. Romney's emphatic victory in Illinois cannot be parsed. Exit polls point to a double-digit victory in a big state where he does not have a house, did not grow up and where all the candidates were participating. In this race, that qualifies as a big deal.

The last time, we saw that degree of inevitability in the making was Florida. It lasted a week. This one may not be quite so enduring. On Saturday, the polls open in Louisiana, where the latest poll shows Santorum has a double-digit lead.

And so it goes on. The time has come for someone to put this Republican race out of its misery. Club it, drown it, euthanize it in the most humane manner possible. Whatever it takes to relieve the torment of those involved and the few of us who are still watching: a mercy-killing for which we would all be grateful.

I admit that seeing the Republican party eat itself whole from the inside out has a macabre fascination. But there is an unseemly quality to delighting too much in the agony of others, even if you wish them ill. Some people have called it a circus. But circuses are fun. This is about as much fun as watching a man in a sweater vest talking about bestiality.

Every week, there's a new test. Every week, one candidate fails it, but nobody seems to pass.

This week was different. True, Romney outspent Santorum in Illinois seven to one. True, also, that more than 40% of both Romney and Santorum supporters had reservations about their candidates. Within the flawed and fantastical parameters of this campaign, Romney did well Tuesday. But next week will be a different story.

It's the same problem the party's had since it lost in 2008: there are no adults in charge. With all the energy coming from an anti-establishment wing of the party, the kind of grandees who might put this thing to bed are lying low. With rhetoric that despises anything that smacks of compromise or negotiation, almost all political conflict necessarily ends in protracted crisis – whether it's raising the debt ceiling or the payroll tax.

It wasn't always like that. But the changes that have taken place in the Republican party over the last few years were evident this week in Illinois. Things are not what they were in the land of Lincoln.

"The advent of the Tea Party has really changed the dynamics of the party in Illinois," John Zahm, Santorum's state director, told the New York Times. "The old story just isn't so anymore."

But that doesn't make it a great story. In 2010, the state saw one Tea Party supporter snatch a Democratic seat in Congress, while another social conservative won in a crowded primary only to lose to the protege of now-jailed Governor Rod Blagojevich.

"Illinois is a conservative state, but we're not a rightwing state," former Republican Governor Jim Thompson told the Wall Street Journal. "Every time we elect a rightwing candidate for governor, they lose."

When it comes to national politics, you get the sense that nothing much has played in Peoria for quite some time. The race doesn't usually go on this long or get this far; and even when it does, there isn't usually too much to play for. Many of the people who showed up at the Romney event at Bradley University, Monday, had no intention of either voting for him or heckling. It was just a chance to see a guy from the TV in the flesh.

He could as well have been Ray Barone or Betty White. Asked by one student where he might suggest "millions of women go" without the organization offering reproductive and sexual healthcare (that is, Planned Parenthood, which he has pledged to defund), Romney said. "Well they can go wherever they'd like to go. This is a free society."

That's the kind of primary response that could hurt him when he seeks to broaden his appeal and finds that many otherwise conservative women can tell the difference between small government and small-mindedness.

Outside Davis Brothers Pizza in a parking lot in East Peoria, where Santorum addressed the faithful, such doubt was tantamount to heresy. Everyone who was there was there for a purpose: to get their rage on. The very mention of "Obamacare", along with the United Nations and moderates, got a boo. Before a crowd of several hundred, Santorum painted the today's choice in apocalyptic terms. Another four years of Barack Obama would put America itself, the very idea, purpose and mission of it, in peril.

"This is the most important election of your lifetime," said Santorum. "And I don't care how old you are." Many were under five: it's an interesting – and impressive – aspect of Santorum rallies that they are usually family affairs. While invoking God and country, he rallied the religious against the onward march of radical theocrats – in Iran, that is. Having ridiculed Obama for using a teleprompter (a jibe I really don't understand: it's not as though Obama invented them – and it's not like using one is cheating), Santorum rambled on for 20 minutes longer than he should have.

Few seemed to mind. One man would episodically shout "Free-dom, free-dom, free-dom", for no apparent reason at all. The odd thing was, in the moment, it didn't seem odd.

Romney insists this is a delegate race, the kind that Obama ran and won. That's technically true and politically irrelevant. Obama was running against Hillary – the "inevitable" candidate, until the voting started.

Romney was the "inevitable" candidate, until the voting started. In Santorum, he's running against the GOP equivalent of Dennis Kucinich, and a candidate whose standing in the race amounted to a rounding error for most of last year. Between them, Obama and Hillary massively increased the Democratic primary turnout. Romney and Santorum are shrinking the turnout in theirs.

So, this race of diminishing returns continues, the contest that refuses to die. After Louisiana, where Santorum has a tenuous lead, comes DC, Maryland, Wisconsin – states that would seem to favour Romney, but not conclusively so.

All the candidates, for different reasons, say they'll take the race all the way to the convention. But they won't be taking many people with them.