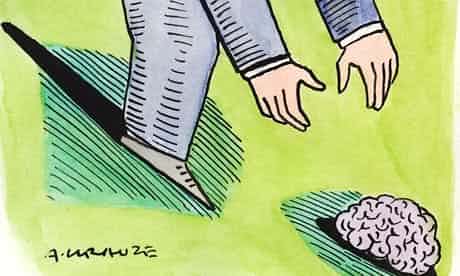 In Cain and Perry's gaffes, the Republicans' degradation is laid bare
The Guardian,
Illustration by Andrzej Krauze

During an interview with the Christian Broadcast Network last month, the Republican presidential hopeful Herman Cain was asked whether he was ready to answer questions on international affairs.

"Are you prepared for the gotcha questions that are coming from the media and others on foreign policy?" asked David Brody. "Who is the president of Ubekistan [sic]? All this stuff. It's coming. How are you dealing with it?"

Bear in mind that this was not, itself, a "gotcha question". It was a friendly attempt by a conservative interviewer to allow Cain to get his excuses in early for his lack of foreign policy expertise. But rather than use the question to deflect those inevitable accusations, Cain embraced his ignorance as though it were a badge of honour.

"I'm ready for the gotcha questions," insisted Cain . "They've already started coming. And when they ask me who is the president of Ubeki-beki-beki-beki-stan-stan, I'm going to say you know, I don't know. Do you know?"

Last week, when Cain was being interviewed by the editorial board of the Milwaukee Sentinel, that badge had lost whatever lustre it had. Once again this was no gotcha question. The journalist asked: "So you agreed with President Obama on Libya or not?"

It rapidly became apparent not only that Cain had no idea what Obama had done in Libya, but that he was not clear what he thought about either the situation or Obama's actions, apart from that whatever Obama did, he didn't like it.

"Libya," he said before an excruciating nine-second pause. "President Obama supported the uprising. Correct? President Obama called for the removal of Gaddafi? I just want to make sure we're talking about the same thing before I say yes, I agreed, or no, I didn't agree."

This was actually the most coherent part of the answer. He blustered and bloviated his way on to YouTube: another Republican out of his depth, on his way to becoming viral. On Thursday he channelled President Arnold Schwarzenegger in The Simpsons movie, insisiting: "We need a leader not a reader." On Friday he claimed that the Taliban is running Libya.

Over the last couple of months the full extent of the intellectual degradation of the Republican party has been laid bare. Before Rick Perry forgot his own talking points he insisted the American Revolution was fought in the 16th century (200 years too early); Michele Bachmann claimed the vaccine against human papilloma virus can cause "mental retardation" (it can't), and that John Quincy Adams was a founding father (he wasn't). Individually these could be lapses of memory, slips of the tongue. But together they are emblematic of a brazen philistinism and reckless defamation that has dominated the American right in recent times. What we've witnessed in these debates are not gaffes, but the inevitable result of a descent into rhetorical hyperventilation. For the past three years making bizarre, false, inflammatory statements was not regarded as an obstacle to being taken seriously within the party but a prerequisite for it.

Polls last year showed a majority of Republicans believed Obama was a Muslim and a socialist who "wants to turn over the sovereignty of the United States to a one-world government"; two-thirds either believed or were not sure if the president is "a racist who hates white people", and over half believed or were not sure if "he was not born in the US" and "wants the terrorists to win".

Never mind that the Ground Zero mosque was neither a mosque nor situated at Ground Zero, or that the foreign-born Muslim Obama is actually an American-born Christian. Facts didn't matter. So nor did lies.

The issue here is not whether any of the candidates knew specific facts. The American presidency is not a meritocracy. The 99% get a vote; but only those who have access to the wealth of the 1% get to stand. And even if it was meritocratic, academic intelligence would not be a sufficient qualification. Look around you at your home or workplace. The person with the best academic qualifications may not be the smartest and the smartest might not be the one you would choose to represent your interests. Knowledge helps. But good political leadership also demands emotional intelligence, gut instinct, an ability to persuade and strategic savvy.

Much of the ridicule of Sarah Palin's syntax and diction (as opposed to her policies) smacked of class snobbery. Liberals who claim anyone, particularly among the poor, who votes for Republicans must be stupid express the very elitism that makes the Tea Party possible. When the Democratic presidential candidate Adlai Stevenson was told he'd have the vote of every thinking person in America he reportedly replied: "The trouble is, I need a majority." With an attitude like that he deserved to lose.

Conversely, almost a quarter of Obama's appointees went to Harvard. That doesn't suggest he's drawing from a wide pool of talent but rather fishing in a shallow, socio-economic gene puddle. And that's not working out too well .

There are performative standards one expects from any potential president: a basic knowledge of current affairs; a desire to get facts right and a refusal to repeat "facts" that have been proven to be false; an ability to hold their own in discussion and negotiation. In short, the skills they would need if they won.

The trouble for the Republican establishment is that, despite Obama's vulnerabilities, almost everyone in rightwing politics with those talents (they do exist) looked at what it would take to do, say and be viable and decided to sit this one out. To be credible in the Republican primaries in this climate you have to be as confident that God created the Earth in six days as you are uncertain about what is causing global warming. So the calibre of the Republican candidates now is commensurate with the calibre of debate within the Republican party over the past few years – pitifully low. They make George W Bush look like Aristotle.

Competent candidates are busy recanting every sane thing they ever did or said. The frontrunner, Mitt Romney, once supported abortion rights, stem cell research, climate change caused by humans and the basic planks of Obama's healthcare plan that he implemented as governor in Massachusetts. Not anymore. Newt Gingrich, who has joined Romney since Cain's implosion, has just released a page of penitence on his website in which he renounces almost every moderate stance that does not chime with the hard-right orthodoxy.

None of this means Republicans cannot win. Incompetence, ignorance and disingenuity are no barriers to elected office. In the only televised debate for the 2010 gubernatorial elections in Arizona, a swing state, the Republican incumbent, Jan Brewer, stopped halfway through her opening statement, stared blankly into the camera, and started giggling. She won by 12 clear points and enjoyed a 19% increase in her vote.

Obama sold the nation on hope and has presided over despair. It's because the Republicans have been so dysfunctional that he still has a shot. It's because he has delivered so little that their dysfunctionality may not matter. The stakes are high, the standards are low, and the choice is paltry.