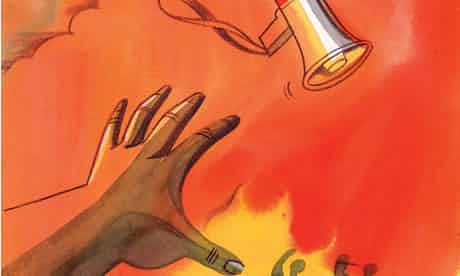 Indifferent elites, poverty and police brutality – all reasons to riot in the UK
The Guardian,
Illustration by Toby Morison

At the beginning of August, in a fit of collective pathology, thousands of young people across Britain took to the streets and started breaking into shops, stealing and confronting the police. What triggered this is a mystery. But whatever it was, it wasn't politics, poverty, alienation or despair. That would be making excuses for bad behaviour and imply a humanity to which the rioters had no right. For the riots were not the work of mostly disaffected teenagers but a "feral", "uneducated" "underclass" who somehow managed to outwit the police for the best part of a week using new technology. Venal, entitled and irresponsible, they adhered to values entirely unfamiliar to the British political establishment.

Beyond the growth of gang culture and the demise of individual responsibility, no credible broader explanations were offered for their behaviour. If the problem had been rooted in politics and economics, the solution might have resided there also. But for the government, this was the work of criminals; the only effective remedy was punishment.

Four months later the absurdity of the official response to the riots is painfully clear. It took a while. Given the spontaneous, geographically diverse and inchoate nature of these disturbances, there was never a credible single cause. Even if there had been, there were few among the rioters who would have been in a position to articulate those grievances. The journey from the margins to the mainstream is a perilous one, which few make intact without losing their voice.

The government's narrative may have been ridiculous, but in the absence of a counter-narrative, many believed it plausible. The impression of unclaimed chaos and the shots of burning cars, devastated shopkeepers and hooded youth lent credibility to claims that this was nothing more than young hooligans running amok. "A riot," said Martin Luther King, "is the language of the unheard." Now, thanks in no small part to a study undertaken by the Guardian with the London School of Economics, we've had a chance to listen.

We already knew the government was wrong about the causes. "At the heart of all the violence sits the issue of the street gangs," claimed David Cameron at the time. The government's own research later showed that only 13% of those involved in the riots were gang members, and even then, most were not operating as a gang. Paradoxically, if anything, the riots temporarily tempered gang activity, as rival gangs set aside their differences so they could participate freely in the looting. Poverty was clearly a factor. Ministry of Justice figures revealed almost two‑thirds (64%) of the young rioters lived in the poorest areas and 42% relied on free school meals. "There is nothing so dangerous as a man who has nothing to lose," wrote James Baldwin. "You do not need 10 such men. Only one will do." With youth unemployment rising to 21.9%, Britain is producing thousands.

But in the absence of any demands, organisation or even slogans, even those who argued that these riots were political in nature struggled to fathom what the nature of the politics were. Thanks to the research, two particular themes have helped correct some initially flawed impressions. First, the rioters were far more politically conscious than even many on the left, myself included, first thought.

This in no way romanticises their actions. Looting is opportunistic, and most of those involved freely admit to being opportunists. When asked how he heard about the riots, one interviewee said he got a message on his BlackBerry saying people were "getting free stuff out and about", so he joined in. One should not overstate the case: stealing trainers and burning police cars are not the hallmarks of political sophistication. But then nor are riots. They are the crudest tool for those who have few options. By definition, they are chaotic. Rich people don't riot because they have other forms of influence. Riots are a class act.

However, these youngsters were not devoid of political consciousness either. Many, including those who live outside London, knew of the fatal police shooting of Mark Duggan, and 75% cited it as an important or very important cause of the riots. They were also considerably more likely than the public at large to say poverty, inequality, government policy and policing were behind the riots.

The second theme to emerge from the report is that the rioters' primary grievance is not the one most of us imagined. The general assumption, among those who believed political causes both existed and mattered, was that the driving force for discontent was economic. Everyone from the UN to Nick Clegg had predicted social unrest if the austerity measures were pushed in time of recession. Indeed, the government's high-handed moral pronouncements were particularly hard to take given the recent behaviour of our political and financial elites: a corrupt political class embroiled in phone hacking and expense scandals, and a disdainful financial sector where failure brought huge bonuses.

Cameron characterised the moral collapse that made the riots possible thus: "It is a complete lack of responsibility in parts of our society; people allowed to feel the world owes them something, that their rights outweigh their responsibilities and their actions do not have consequence." He could just as easily have been talking about bankers.

Economic issues were important. The cause most often cited for the riots was poverty (86%), but unemployment (79%) and inequality (70%) featured prominently too. Few guessed, though, that this tinder in the box was lit at least as much by the long arm of the law as the invisible hand of the market. Almost three-quarters of interviewees said they had been stopped and searched by the police in the last year; 85% said "policing" was an important or very important cause of the riots. Just 7% believed the police do a good job in their area.

But in all the interviews, the apparently mutual contempt between rioters and police comes through. Tales of petty harassment, abuse and humiliation were commonplace. One told the story of a looter who stole a television so he could throw it at the police. "It felt like it was on a leash for years and … we've come off the leash and just responded in that way basically," says one interviewee.

"And what was the leash; who was holding you on that leash?" asks the interviewer.

In a year that started with the uprisings in Tunisia and is ending with police raids on occupations protesting inequality across the globe, only a naïf would understand these disturbances as a random, isolated moment of mass social deviancy particular to Britain. It would be like claiming that the two black athletes who raised their fists on the podium during the Mexico Olympics in 1968 engaged in individual acts of protest in no way related to the students in Paris, the massacre in My Lai or the passing of the US civil rights act.

The 2011 riots would probably win gold as the year's most destructive, least coherent protest of disaffected youth against indifferent elites, economic hardship and police brutality. Rioters were more likely to give the finger than clench the fist. But what this report makes clear is that they belong to the same category of protest.

follow on twitter
RT @MCRSociology: Gary Younge discusses identity politics and America with Will Hutton in this episode of @thewesocietypod https://t.co/72…
RT @mart_welton: Congratulations to all those getting their A-level results today. If you have BBB at A-level or above you can still apply…
RT @BernardineEvari: Please follow the groundbreaking online #MuseumofColour UK, founded by the unstoppable Samenua Sesher. The 1st gallery…
RT @EthnicityUK: Gary Younge is interviewed by @sonikkalogan about his work on racism and gun violence in @the_hindu #DataPoint podcast. h…
RT @thefreedomi: 🚨 NEW: Saudi women’s rights activist & academic Salma al-Shehab was sentenced to 34 years in prison + 34 year travel ban f…
RT @LRB: #DawnFosterForever! On Thursday 15 September at the @LRBbookshop, @BizK1, @piercepenniless, Lynsey Hanley and @garyyounge will d…
RT @ShowunmiV: This is how we support Black women and girls https://t.co/8YmgV21zHo
RT @sonikkalogan: It's #DataPoint Pod Thursday! In this week's episode, I talk to @noraneus, @garyyounge and @Casey_J_Wooten about the U.S.…
RT @bgnoiseuk: Next month, @LRBbookshop will host an event to celebrate the life and work of Dawn Foster with @BizK1, @piercepenniless, Lyn…
Help me Twitter. The quote: ""You can cut all the flowers but you cannot keep Spring from coming." is most commonly… https://t.co/Xs7JkiOEd5
© Gary Younge. All Rights reserved, site built with tlc
Lioresal online in india Actonel pill price What do you need to buy eldepryl What do you need to buy metformin Buy zetia online with free samples Risperidone and abilify together Where to buy carafate Avelox price walmart Where to get zocor pills Best online seroquel