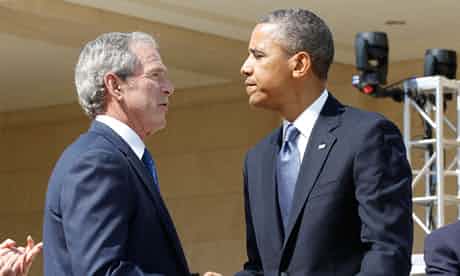 Is Obama worse than Bush? That's beside the point
The Guardian,
Photograph: Jason Reed/Reuters

Not long after the story into the National Security Administration's spying programme broke, US president Barack Obama insisted the issues raised were worthy of discussion:

"I welcome this debate and I think it's healthy for our democracy. I think it's a sign of maturity because probably five years ago, six years ago we might not have been having this debate."

In fairly short order, a YouTube compilation appeared, showing Obama debating with himself as he matured. Flitting back and forth between Obama the candidate and the Obama the president, we see the constitutional law professor of yore engage with the commander-in-chief of today. Referring to the Bush White House, candidate Obama says:

"This administration acts like violating civil liberties is the way to enhance our security. It is not."

"My assessment and my team's assessment was that they help us prevent terrorist attacks."

"This administration also puts forward a false choice between the liberties we cherish and the security we provide."

"You can't have 100% security and also then have 100% privacy and zero inconvenience. We're going to have to make some choices."

The notion that a president's record might contradict a presidential candidate's promise is neither new nor particular to Obama. And we should hope that politicians evolve as their careers progress and new evidence and arguments come to light.

What makes these clips so compelling is that they show not evolution, but transformation. On this issue, at least, Obama has become the very thing he was against. They're not gaffes. These are brazenly ostentatious flip-flops. And regardless of how much they cost him, Obama has clearly no intention of taking them back.

Given that he is not only defending but escalating the very things he criticised the Bush administration for, the accusation that many have made that he is "worse than Bush" on this issue, and others relating to privacy, security and drone attacks, is not unreasonable. Obama's administration has denied more Freedom of Information Act requests than Bush did, and prosecuted more whistleblowers than all previous administrations combined.

But the charge also misses the point.

Just as one head of a chamber of commerce may be more or less hostile than another to the labor movement, but is ultimately charged with representing the interests of the business community, so Obama's room for maneuver is constrained by the institutions in which he is now embedded.

Whereas Bush illegally invaded a nation with great fanfare, Obama has chosen to bump people off with great stealth (unless it's Bin Laden, in which case he metaphorically parades around with a head on a pike). Those are different strategies, but the discussion about which is better or worse is sterile precisely because neither is good and neither works. Whatever their declared intentions, both involve the murder of civilians and the creation of enemies, which in turn demand a clandestine security structure that seeks to pre-empt the metastasizing resistance to its policies both at home and abroad. The sprawling growth of its spying program is commensurate with the size of its military and the spread of its incursions into countries like Yemen, Somalia and Pakistan where it is not formally at war.

As I wrote the day before Obama's first inauguration:

"He has been elected to represent the interests of the most powerful country in the world. Those will not be the same interests as those of the powerless."

America did not come by that power through its own innate genius. It acquired it, as do all empires, in no small part through war, invasion, subterfuge and exploitation. Spying and lying about it comes with the job description for which Obama applied and was reappointed.

None of this is inevitable. But changing it cannot be entrusted to a single person at the top. It will change because there is a demand from Americans that is both large in number, deep in commitment and active in pursuit, to enable a fundamental change in America's role in the world. That does not exist yet.

Where Obama is concerned, this excuses nothing – but explains a great deal. Given the timidity of his campaign agenda, his supporters must, to some extent, own their disappointment. He never said he was a radical, nor proposed anything radical, even if he was happy at one time to be marketed as one.

Given that he kept on Bush's defence secretary and appointed an economic team friendlier to Wall Street than the poor, we should not be too shocked about these continuities. But there are some things he did promise to do – and was twice elected with a massive mandate to do them. Protecting civil liberties was one of them.

When given the choice of representing the interests of those who voted for him and the interests of American military and economic hegemony, he chose the latter. That's not the change people believed in.