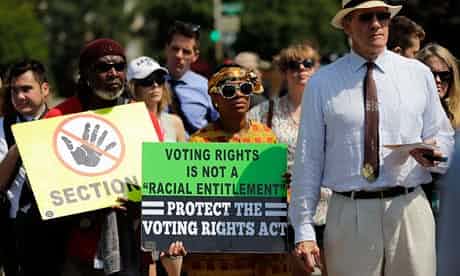 On the Voting Rights Act, the colour-blind have been led by the blind
The Guardian,
Photograph: Win Mcnamee/Getty Images

One of the greatest cheers at an otherwise lacklustre Republican convention in Tampa last year was for Condoleeza Rice, who gave a glowing autobiographical account of her achievements in the third person. "A little girl grows up in Jim Crow Birmingham," she said, "the segregated city of the south where her parents cannot take her to a movie theater or to restaurants, but they have convinced her that even if she cannot have a hamburger at Woolworths, she can be the president of the United States if she wanted to be, and she becomes the secretary of state."

All mention of what it took to make such a life possible is an inconvenience. The children who were jailed, set upon by dogs and drenched by fire hoses in her home town, so that integration could become a reality, are irrelevant. The people who were killed because they registered to vote, marched against humiliation or just wouldn't shut up when they were told to – so that a black female secretary of state was even plausible, let alone possible – do not fit. Condi made it because she worked hard. Maybe her kindergarten friend, Denise McNair, would have made it too. We'll never know because she was bombed to death by those opposing integration while studying at Sunday school. Segregation was fickle that way.

At times it seemed that the only thing more attractive to Republicans than watching a nonwhite person describe how he or she had overcome huge obstacles to reach the top was coming up with new obstacles to gleefully throw in front of the next generation. Tuesday's supreme court ruling, freeing states from special federal oversight under the Voting Rights Act of 1965, marks yet another attempt by American conservatives to posit racism not only as a discreet phenomenon of the past but one which has no discernible legacy. "There is an old disease, and that disease is cured," argued Bert Rein, when opposing the act before the supreme court earlier this year. "That problem," claimed Rein, "is solved." Well that's a relief. Racism is over. Let's all move on. Nothing to see here.

This white flight from history is not new for the Right. Those who oppose affirmative action, for example, cite Barack Obama as a reason for why it is no longer necessary – even though he was a beneficiary of it. "Obama embodies and preaches the true and vital message that in today's America, the opportunities available to black people are unlimited if they work hard, play by the rules, and get a good education," wrote Stuart Taylor Jr in the National Journal in 2008. They also quote Martin Luther King, even though he was an advocate of it.

If the problem Rein identified is codified segregation at the polls, enabled by the laws and officials that specifically and explicitly bar black people from voting, then of course he is right. But there was always more to racism than segregation and always more to equality than integration. "The issue for black people was never integration or segregation, but white supremacy. The paradigm of integration and segregation was a white concern," said Charles Payne, the Frank P Hixon Distinguished Service Professor at the University of Chicago. "That was how they posed the issue of civil rights given their own interests, and that was how the entire issue then became understood. But the central concerns of black people were not whether they should integrate with white people or not, but how to challenge white people's hold on the power structure."

All Rein really showed is that racism is now more subtle, not that it has disappeared. They have taken down the offensive signs but continued the offensive practice. From the outset of the post-civil rights era that was always the strategy. "You start out in 1954 by saying, 'Nigger, nigger, nigger'," explained the late Lee Atwater, the one-time chair of the Republican National Committee and member of the Reagan administration, in 1981.

By 1968 you can't say 'nigger' – that hurts you. Backfires. So you say stuff like forced busing [and] states' rights … You're getting so abstract now [that] you're talking about cutting taxes, and all these things you're talking about are totally economic things and a byproduct of them is [that] blacks get hurt worse than whites … obviously sitting around saying, 'We want to cut this' is much more abstract than even the busing thing, and a hell of a lot more abstract than 'nigger, nigger'.

Now here we are, with Republicans routinely pursuing voter ID laws addressing a problem that does not really exist (voter fraud) while actually practicing a method of exclusion they claim is extinct (discrimination at the polls). Examples of voter-rights violations are legion; the prospects for challenging them will now be more limited. What the supreme court has signalled is that after 60 years of legal support, the American judiciary is willing to draw a line under more than 350 years of racism and its legacy. Their colour-blind approach does not mean that racism will cease to exist at the polls. Only that they will cease to see it.

follow on twitter
RT @sulaimanaddonia: I have an extreme fear of technology, but this festival prompted me to get over my technophobia. So I built my 1st eve…
RT @Ciaran_Laval: @therealmi5 @Saffiya_Khan1 @davidschneider @EHRC This is an issue that hasn't been addressed for decades, it came to a he…
RT @jielbyr: "We are trying to raise self-confident children for long lives, not hashtags for slaughter." Gary Younge
I dream of a world without borders; but in the meantime I’m more than happy with my friends without boundaries. https://t.co/Tg9vuEXxie
RT @MsJeanRhys: I had two longings & one was fighting the other. I wanted to be loved & I wanted to be always alone.
Wow. Twitter has many faults. But when someone can use to let you know they’ve found one of your late mother’s scho… https://t.co/tYlcKhLdbh
RT @courtneyyusuf: Tune in to @garyyounge ‘s beautiful last column after 26 years at the @guardian , and get behind the curious case of Car…
RT @DawnButlerBrent: So happy to be on the ballot for Deputy Leader 😊. Thank you to all colleagues who nominated me and all the members sup…
RT @NesrineMalik: A kangaroo court is set up. The outcome of the litigation is certain. The whole point is the spectacle, rather than the i…
RT @DawnButlerBrent: I'm proud that the field of candidates standing for @UKLabour leadership and deputy leadership are diverse. I hope the…
© Gary Younge. All Rights reserved, site built with tlc