It’s not Harry and Meghan. It’s the monarchy I oppose
The Guardian,
Illustration by Matt Kenyon

The royal wedding, as we now know it, was born in 1922. The marriage of Princess Mary to Viscount Lascelles was, it is said, less an arranged union than a forced one. Lascelles bet his friends that if he asked King George V’s only daughter to marry him she’d say yes. Mary was not keen. But the king insisted. Whatever private anxiety there might have been was buried deep beneath the public ceremony.

Monarchies elsewhere had fallen foul of popular uprisings; Britain’s royals felt they had to work for their privileges. Five years earlier, during the first world war, the House of Saxe-Coburg and Gotha had rebranded itself the House of Windsor to establish some distance from their German lineage.

Royal weddings are no more about two people being in love than a presidential inauguration is about a politician’s first day in a new job. That doesn’t mean the couple in question don’t necessarily love each other. Only that it is not a prerequisite for the ceremony.

When it comes to royal events it is not individuals but the institution – the monarchy – that really counts. So the nuptials of Prince Harry and Meghan Markle are a private ceremony only in the formal sense that it is not an official state occasion. It will be televised, has received acres of newspaper coverage, has 600 guests, costs £32m, and 1,200 “commoners” have been nominated to “join in”. 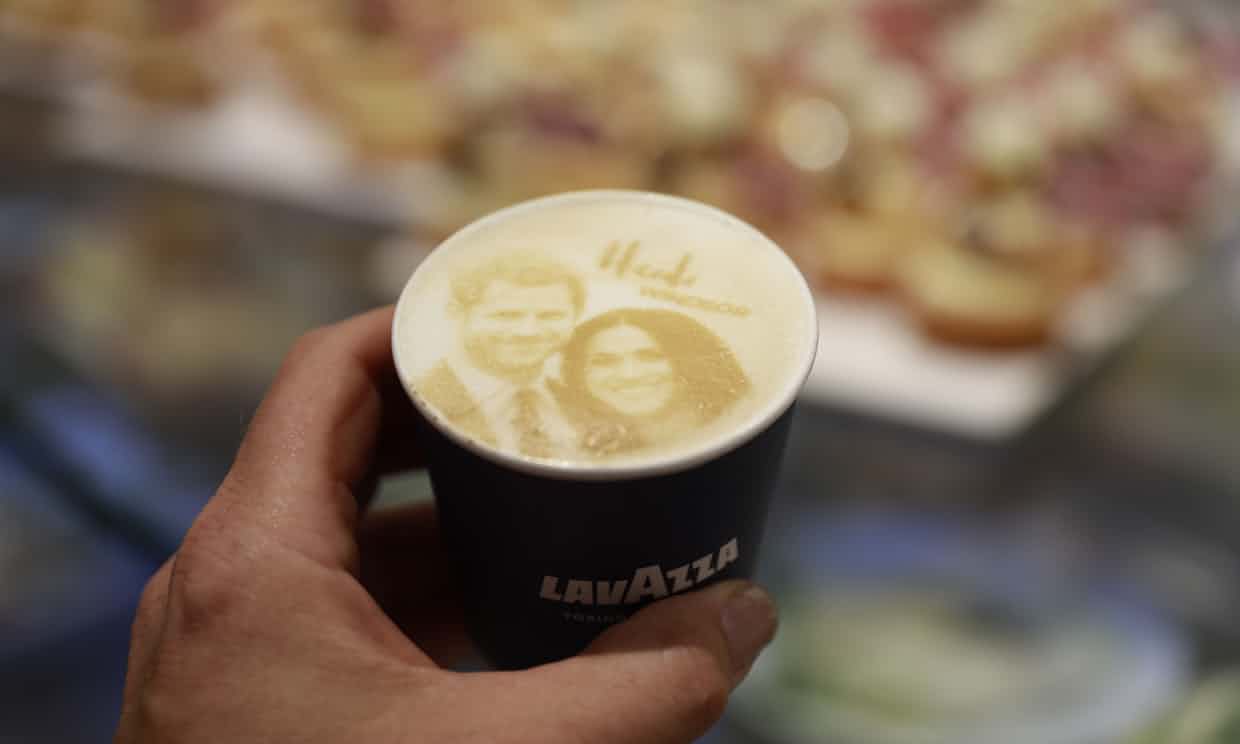 A ‘Megharryccino’, sold by a coffee shop in Windsor. Photograph: Odd Andersen/AFP/Getty Images

I wish it was private. Then they could have their seclusion and I could ignore it. But then what would the point of that be? “To be invisible,” wrote the 19th-century constitutionalist Walter Bagehot, “is to be forgotten … To be a symbol, and an effective symbol, you must be vividly and often seen.”

I for one have already seen enough. I’m a republican for all the obvious reasons. A monarchy establishes inherited privilege at the heart of government and embeds patronage at the centre of power. The royals are a class act. And that’s the problem. I’m not a very passionate republican – many things bother me more than the monarchy. But as principles go it is unwavering. We have a class problem in Britain and the monarchy exemplifies it. If it’s a guilty pleasure I’m after, I don’t turn to betrothals in real-world feudal dynasties: I have Netflix. The political scientist Benedict Anderson described countries as imagined communities. Call me a misery guts, but I’d rather imagine one in which I am born a citizen, not a subject, and others are not born to govern me.

I’d be fine leaving the whole thing alone; the trouble is it won’t leave me alone. Last week Harry and Meghan showed up in both my kids’ book bags – they’d been invited by their schools to celebrate their wedding by wearing red, white and blue or buying cupcakes or both.

This is propaganda through tasty pastry. The purpose of these highly scripted and tightly choreographed weddings is twofold: to renew the monarchy’s sense of legitimacy and to establish its relevance. Those who claim God has ordained that they should rule over everyone else will always have to worry about credibility. The Russian tsar executed by the Bolsheviks was the Queen’s grandfather’s cousin. Her husband, Prince Phillip, was evacuated from Greece as a baby on a warship in a cot made from a fruit box. So she knows a thing or two about what can happen when legitimacy is lost.

It is worth noting that the wedding in which the most royal PR capital has been invested – between Prince Charles and Lady Diana – was for the marriage that failed most publicly and calamitously. The uncertain response to Diana’s death was the one occasion in recent memory the institution looked vulnerable. For all that, the monarchy seems safe. Half of Britons think it is good for Britain and even more believe it should continue.

Given the parlous state of our political class, the polarised nature of our political culture and the absurd figure we cut on the world stage following the Brexit vote, institutions such as the monarchy can be reassuring for some. A royal wedding provides a semblance of stability and the hope of unity for those who’d favour the certainties of a benign dictatorship over the vagaries of democracy.

The royals’ relevance relates to their ability to adapt their elite entitlements to the popular mood. The Queen, for example, used clothing ration coupons to pay for her wedding dress (the government gave her £200 extra). Meanwhile both the Duchess of Cambridge and Markle have university degrees, the first royal brides who can claim such erudition. Being black, Markle is the first who can claim such melanin. These attributes, we’re told, illustrate the institution’s capacity to evolve. If anything they reveal the opposite. Women with university degrees and interracial marriages are neither recent nor rare in Britain. The fact they are remarkable at this level of the aristocracy is itself remarkable.

Asked in a survey which words best describe their feelings about the wedding, 46% said “indifferent”, the most popular answer, followed by 29% who described themselves as “happy”. Those who prefer their matrimony with a dose of class deference mistake this ambivalence for curmudgeonliness. That is incredibly self-serving. Weddings are my favourite life-cycle event – particularly British ones. Multi-generational, diasporic, boozy, flirty, with dad-dancing and simmering family drama – I’m more fond of them than the institution of marriage itself.

But the weddings I enjoy are the ones where I know the people getting married. I have no more inclination to be interested in this wedding than to wander into a random church on a Saturday afternoon and become engrossed in the ceremony of anyone else I don’t know. I don’t begrudge anyone feeling differently. I understand that all sorts of people see all sorts of things in her, him, them and it. And I get the intrigue over Charles’s late entry as the candidate to walk Markle down the aisle. “A princely marriage is the brilliant edition of a universal fact, and, as such, it rivets mankind,” wrote Bagehot. “A royal family sweetens politics by the seasonable addition of nice and pretty events.”

Once upon a time maybe. But at this stage the appeal for many seems to lie in a cross between Red Nose Day and the Eurovision song contest – a camp and kitschy licence to be lowbrow on a national scale. If they can derive pleasure from the elite marriage of strangers, that’s great. I bear no animus towards the happy couple on their big day.