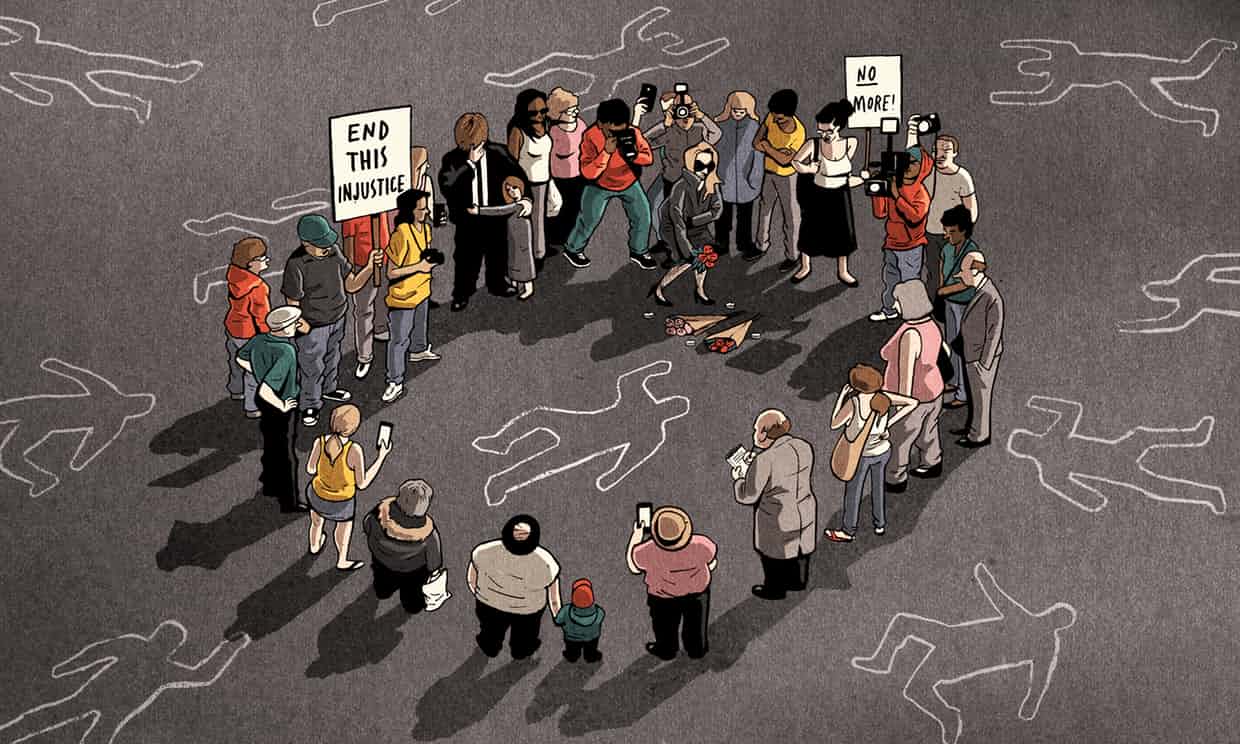 From Windrush to Grenfell, the powerful only see tragedy when it suits them
The Guardian,
Illustration: Ben Jennings

When Hurricane Katrina struck New Orleans, leaving the dead floating in the street and the living stranded on highways and rooftops, a huge crowd of mostly black and poor people descended on the city’s convention centre, where the cameras, but little else, were waiting. When asked why relief organisations had been caught off guard, the hapless director of the Federal Emergency Management Agency, Michael Brown, responded: “We’re seeing people that we didn’t know exist.” Since the population of New Orleans was well known, a more accurate assessment would have been: “We’re seeing people that we didn’t realise we were supposed to care about.”

Such is the nature of scandals in the west involving the marginalised. The outrage emerges not from the revelation that a particular injustice exists. The injustices are usually known, assumed and acknowledged. It was not news that New Orleans had a significant poor, black population that had no means of getting out of the city, any more than it was news that black Americans were being shot dead with impunity, or that in the Mediterranean migrants who could be saved were perishing at sea. We knew.

The scandal resides in the popular recognition – often sudden, unpredictable and fleeting – of the humanity in those suffering the injustices. It took the story of Trayvon Martin’s death, his killer’s acquittal, and the body of another black man – also called Michael Brown – being left on the street in Ferguson for four hours before America would finally pay attention. Similarly it took the body of three-year-old Alan Kurdi, a Kurdish Syrian refugee crossing the Mediterranean with his family, to wash up in Bodrum, face down in the surf, for Europe to even begin to engage with the effects of its migration policy.

In each case the privileged appear involuntarily struck by a sudden bout of empathy. For a moment, those who are excluded become human beings. A child – not “another refugee” – has drowned; a teenager – not “another black kid” – has been shot. And in that moment a paradigm shifts. A previously supine public demand to know how this could happen, either unaware or uninterested that the polity was taking its cues from them. Politicians, caught flat-footed, wonder when and how the rules changed. They assumed there would be no political price to pay for malign neglect, active mistreatment or flagrant discrimination. For the longest time they were right. They had licence. Worse still, we gave it to them.

So the political class made the calculation that some people simply don’t matter and on this basis some live, some die, others stay and some are deported. The fact that these actions are unjustifiable is only relevant if those who make them are called upon to justify them. Sadly, that all too rarely happens.

And then, for whatever reason, the dam bursts. People won’t stand for it and suddenly politicians can’t get away with it. Caught trying to rationalise their ambivalence about the pain they have knowingly caused they become evasive, lie or simply try to tough it out with narrowly tailored expressions of regret, in the hope we will all move on.

The aftermath of last June’s fire at Grenfell Tower, in London, in which more than 70 died and roughly the same number were injured, has followed this pattern. A calamity of this nature had long been predicted. The local residents opted for fire-resistant cladding but were overruled by the local council because it was deemed too expensive. Earlier this week it transpired that another non-flammable option that would have been cheaper was also rejected.

A 2013 inquest into the Lakanal fire in 2009, in which six people were killed in a tower block in Camberwell, south London, found the council “did not prioritise carrying out fire-risk assessments” on residential properties, despite several warnings, and that buildings like Grenfell should be fitted with sprinklers. And then there was the brutally prophetic warning from the Grenfell Action Group seven months before the fire. “[We] have reached the conclusion that only an incident that results in serious loss of life … will allow the external scrutiny to occur that will shine a light on … the malign governance of this non-functioning organisation.”

The reason those with power did not act on these warnings is because they deemed those most likely to be affected to be powerless. They were proved wrong. Grenfell Tower triggered a national conversation about social housing, austerity, deregulation, poverty and social exclusion. Those debates have receded from the national gaze, but outrageously, the cladding that made them necessary, has not. Six months after the fire, just three out of 160 social housing tower blocks identified as dangerous were known to have been reclad with safer materials.

“We’ve got compassion fatigue, we say, as if we have involuntarily contracted some kind of disease that we’re stuck with no matter what we do,” writes the US academic Susan Moeller. But she argues it is avoidance, not fatigue, that averts our gaze. So we look the other way until another tragic conflagration injects a sense of urgency into our indignation.

Similarly, Windrush was only a scandal in so far as those who made it possible got caught and exposed. The Home Office was repeatedly warned by lawyers that some people were being wrongly threatened with deportation and that destroying landing cards would impede someone’s ability to prove how long they had been here.

According to one whistleblower, from around 2013 onwards the number of requests from people from the Caribbean for confirmation of their arrival date began to increase. “People were writing to say, ‘I’ve been here 45 years, I’ve never had a passport, I’ve never needed a passport. Now I’m being told I’m not British, because there is no record of me.’” Six months of reporting didn’t budge them. They knew. They just didn’t care. And, until the last couple of weeks, they thought their indifference would not be a problem.

What’s encouraging about these moments is that they show a significant constituency is receptive to a more humane kind of politics. What is disconcerting is witnessing how much people have to endure before people speak out and act on what they know to be happening and know to be wrong.

“You already know enough,” writes Sven Lindqvist in Exterminate All the Brutes. “So do I. It is not knowledge we lack. What is missing is the courage to understand what we know and to draw conclusions.”