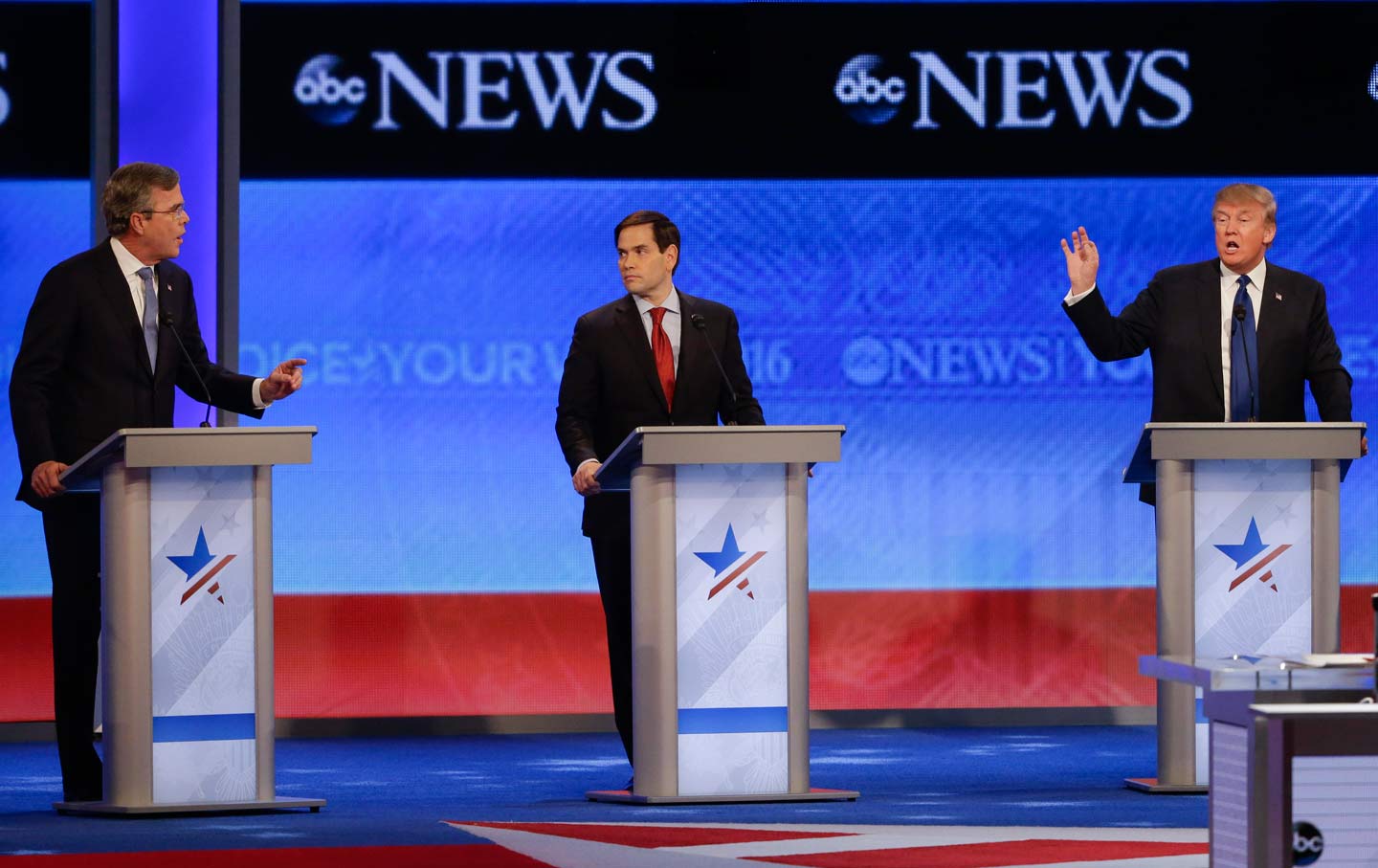 Three years ago, as the Republican-led House of Representatives engineered a brief government shutdown, Congressman Marlin Stutzman (R-IN) explained the strategy underpinning the protest. “We have to get something out of this,” he said. “And I don’t know what that even is.” The shutdown wasn’t a tactic so much as a tantrum, an act of collective petulance posing as politics—inexplicable to the outside world, incoherent in its aims, and incandescent in its rage.

The bizarre circus that the GOP presidential primary has become is not a freak occurrence. Regardless of the eventual nominee, the rise of Donald Trump (“I would bomb the shit out of [ISIS]”), the ascent of Ted Cruz (“To God be the glory”), and the endurance of Ben Carson (“Putin is a one-horse country: oil and energy”) do not contradict the general trajectory of the party, but rather confirm it. This fact-free, bigoted populism awash in money and drowning in misanthropy may illustrate the GOP at its most brazen, but it’s hardly in any way aberrant.

In this regard, Trump is the party’s most obvious emissary. His blatant xenophobia emerges from the GOP’s half-century of race-baiting since Richard Nixon’s Southern strategy was first conceived. The initial idea was to woo Southern whites, who were angry about the advances of the civil-rights movement, with coded racial messaging that wouldn’t alienate the party’s Northern supporters. “You have to face the fact that the whole problem is really the blacks,” Nixon once explained to his chief of staff, H.R. Haldeman. “The key is to devise a system that recognizes that while not appearing to.” This method was once very effective. Ronald Reagan launched his 1980 campaign at the Neshoba County Fair in Mississippi, not far from where three civil-rights activists had been murdered in 1964, by talking about states’ rights. George H.W. Bush had his infamous Willie Horton ad in 1988, while Bush Jr. spoke at Bob Jones University in 2000, where interracial dating was banned at the time.

But with white people heading toward minority status and becoming a lower percentage of the voting public every cycle, the message necessarily gets cruder—particularly with the presence of a black president. In the 2012 GOP primaries, former Pennsylvania senator Rick Santorum told a crowd in Iowa that “I don’t want to make black people’s lives better by giving them somebody else’s money,” while Newt Gingrich branded Obama the “food-stamp president.”

So by the time Trump came on the scene, the party had done away with the dog whistle in favor of a police whistle—no codes necessary. The Mexicans are sending us “rapists”; the Chinese are “cheating”; America needs “a total and complete shutdown” on Muslims coming into the country.

Elements of the Republican establishment bristled, of course. Back in 2012, Senator Lindsey Graham was already warning that when it came to “the demographics race,” the GOP was “losing badly. We’re not generating enough angry white guys to stay in business for the long term.”

follow on twitter
#JosephineBaker ceremony in Paris https://t.co/M8gg06zfTl
RT @SynergiCC: On Thursday, watch out for the release of @JamesNazroo's presentation on #BLM, #racism and #health harms in the UK. #FromPle…
This is basically the thread I put out last night...but soooo much fancier-looking. https://t.co/bWUIGEmtBY
@tjr_london In Paris for the Josephine Baker ceremony I'm afraid.
RT @BritishVogue: As she leads Barbados towards republicanism, charismatic Prime Minister Mia Mottley talks to @GaryYounge about shaking of…
RT @MCRSociology: As #JosephineBaker is elevated to the pantheon today, @garyyounge writes on race, racism and republicanism in contemporar…
@PriyamvadaGopal Thanks @PriyamvadaGopal . Where would I find a comprehensive account of that conference or start l… https://t.co/40Ud2rS6Kj
"African Americans enjoyed an honorary, if contingent, racial status: free to write about racial atrocities in Amer… https://t.co/vRobBofK5D
@chakrabortty What a lovely message. I miss those days. I miss you (not sure I miss the office as such. In Farringd… https://t.co/eviENdkaAp
6/ "Mine is a name with a story from afar, that doesn’t have to be told, that is not often misspelt and that doesn’… https://t.co/F47tepvsxY
© Gary Younge. All Rights reserved, site built with tlc
Antabuse buy How to get a cipro prescription from your doctor Where can you buy cialis Buy sildenafil generic online Tadalafil online us Buy valtrex online with free samples Buy discount vardenafil