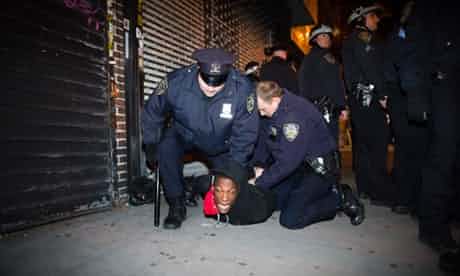 On Saturday evening, a large number youths (by one account, as many as 500), most of them black, rampaged through downtown Chicago's Magnificent Mile, fighting each other and generally creating mayhem. The ruckus had been planned ahead of time on social media.

A mounted Chicago police officer was assaulted. There were more than 20 arrests but no reports of robberies, property damage or injuries. Community activist Andrew Holmes commented:

"I caution those parents if their child has been arrested … You need to think about your child. Just don't say the Chicago police picked on your child, when we watched all the assault going on, especially by teen women."

A couple days later, in a hearing on the NYPD's controversial "stop-and-frisk" tactic in Manhattan federal court, State Senator Eric Adams explained how New York Police Commissioner, Ray Kelly, told him of his policy of terrorising black and Latino neighbourhoods:

"[Kelly] stated that he targeted and focused on that group because he wanted to instill fear in them that every time that they left their homes they could be targeted by police."

Causally, the two events are unrelated. They took place in different cities, several hundred miles apart, on different days, completely independently of each other. There can be no excuse for either. Both are reprehensible.

Contextually, however, they represent two sides of America's mutually-reinforcing urban dysfunction. In which the inequalities of class and race are compounded by the inequities of police discrimination. The result is an environment in which potential for empathy, let alone solidarity, crashes on the rocks of institutional neglect and social alienation, in which violence, be it systemic or episodic, are both chronic and inevitable. What Holmes doesn't seem to understand is that black parents in American cities are thinking about their children precisely because the police do keep picking on them. In Hannah Arendt's words:

"As citizens, we must prevent wrongdoing because the world in which we all live, wrong-doer, wrong-sufferer and spectator, is at stake."

The problem starts with poverty. Infant mortality rates for black families in Pittsburgh are worse than in Vietnam; male life expectancy in Washington, DC is lower than it is the Gaza Strip.

Poverty rates in some black and Latino neighbourhoods in almost every city are higher than 50%. In some, violence is rampant. By one estimate, between 20% and 30% Chicago school children have witnessed a shooting. The US now has more people in its penal system than the Soviet Union did at the height of the gulag system.

"The law," wrote James Baldwin, "is meant to be my servant and not my master, still less my torturer and my murderer." Yet, in the absence of even a partial plan, let alone a comprehensive one, to improve the economic lot of people in these areas, the state's response is simply to contain the chaos engendered by this neglect as though they are occupied territories subject to collective punishment.

To live there is to be suspect. "You're working in Bed-Stuy, where everyone's probably got a warrant," Lt Jean Delafuente told officers at a roll call in 2008, insisting that making the arrest quota should be easy in Bedford-Stuyvesant, Brooklyn. To look like you live there suffices if you are in a certain demographic. Stop "the right people at the right time, the right location", and focus stop-and-frisks on "male blacks" between 14 and 21, Deputy Inspector Christopher McCormack of a South Bronx precinct, told one of his underlings.

In one testimony, Reginald Bowman, the president of a public housing resident leadership group, compared life in the public housing projects to a "penal colony", where police question parents going to the store to get milk and cookies for their children.

According to the Center for Constitutional Rights, which brought the class-action lawsuit currently being heard in Manhattan, claims that many of the 5m stop-and-frisks in the past decade, mostly of black and Hispanic men, were made without cause. Whatever this is for, it is not about preserving order or efficient policing. According to the NYPD's own reports, nearly nine out of 10 stopped-and-frisked New Yorkers have been completely innocent of any violation, let alone a crime.

Yet, thanks to segregation, these mass infringements on civil liberties take place beyond the shadows of the downtown skyscrapers and out of sight of the mostly white and affluent residents of the city who fund political campaigns. All American cities are different. And yet, all share most of these basic issues. Many children in their poorest areas have never been downtown. Like Willy Wonka's chocolate factory, "nobody ever comes in and nobody ever comes out" of the most blighted neighbourhoods – that are known to the rest of the city only through crime reports.

That sense of alienation from one's immediate environment is both contagious and reciprocated. When some do emerge en masse, determined to cause mayhem, as they did in Chicago this weekend, it leaves the well-heeled shoppers and office workers from wealthier climes understandably resentful, unsettled and in shock. What they can't or won't grasp is that if wealth is not distributed evenly and fairly, then chaos will spread randomly and episodically.

follow on twitter
RT @MCRSociology: Gary Younge discusses identity politics and America with Will Hutton in this episode of @thewesocietypod https://t.co/72…
RT @mart_welton: Congratulations to all those getting their A-level results today. If you have BBB at A-level or above you can still apply…
RT @BernardineEvari: Please follow the groundbreaking online #MuseumofColour UK, founded by the unstoppable Samenua Sesher. The 1st gallery…
RT @EthnicityUK: Gary Younge is interviewed by @sonikkalogan about his work on racism and gun violence in @the_hindu #DataPoint podcast. h…
RT @thefreedomi: 🚨 NEW: Saudi women’s rights activist & academic Salma al-Shehab was sentenced to 34 years in prison + 34 year travel ban f…
RT @LRB: #DawnFosterForever! On Thursday 15 September at the @LRBbookshop, @BizK1, @piercepenniless, Lynsey Hanley and @garyyounge will d…
RT @ShowunmiV: This is how we support Black women and girls https://t.co/8YmgV21zHo
RT @sonikkalogan: It's #DataPoint Pod Thursday! In this week's episode, I talk to @noraneus, @garyyounge and @Casey_J_Wooten about the U.S.…
RT @bgnoiseuk: Next month, @LRBbookshop will host an event to celebrate the life and work of Dawn Foster with @BizK1, @piercepenniless, Lyn…
Help me Twitter. The quote: ""You can cut all the flowers but you cannot keep Spring from coming." is most commonly… https://t.co/Xs7JkiOEd5
© Gary Younge. All Rights reserved, site built with tlc
Buy antabuse canada Estrace cost with insurance Lioresal online in india Can you buy over the counter glucotrol How to get pravachol in the us Buy generic tricor Tetracycline for sale Buy myambutol online without prescription Protonix 4 0mg price walmart Nitrostat online canada