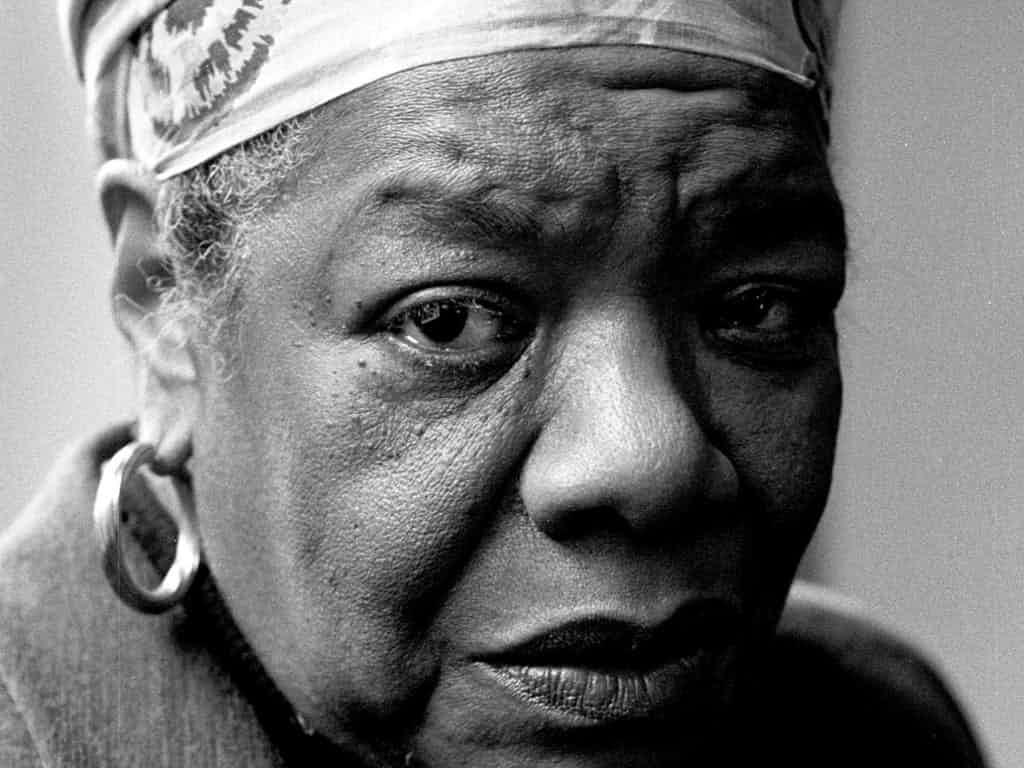 Maya Angelou: a titan who lived as though there were no tomorrow
The Guardian,
Photograph: Martin Godwin

The first time I interviewed Maya Angelou, in 2002, I got hammered. What was supposed to have been a 45-minute interview in a hotel room near Los Angeles had turned into a 16-hour day, much of it spent in her stretch limo, during which we'd been to lunch, and she had performed. On the way back from Pasadena she asked her assistant, Lydia Stuckey, to get out the whisky.

“Do you want ice and stuff?” Stuckey asked.

“I want some ice, but mostly I want stuff,” said Angelou with a smile, and invited me to join her.

Then came a traffic jam. The car came to a crawl. But the whisky kept flowing. So did the conversation. We talked about South Africa, writing, growing old, staying young, our mothers, growing up poor and living abroad. We laughed a lot too: at ourselves, each other and general human folly. She reserved particular ridicule for my hotel, which she thought was pretentious. (She was right). Her laugh was no small thing. She threw her head back and filled the car with it – and it was a big car. Episodically, when words alone would not suffice, she would break, without warning, into verse – sometimes her own, sometimes others'.

When I asked her how she dealt with people's response to old age, she recited the final verse of her poem, On Aging:

I'm the same person I was back then

A lot less lungs and much less wind.

But ain't I lucky I can still breathe in.

And then the laughing would start again. As her car pulled away after dropping me off at the hotel, she put her head out of the window, waved, and shouted like a teenage girl: “That's swanky!” She was 74 and high on life. I honestly couldn't tell if she was drunk or not. There'd been plenty of serious talk throughout the day. But she'd also been singing and laughing since the morning. Anyone who knows her work and her life story – which is a huge part of her work – knows that this is a huge part of her currency. Those maxims that people learn on their death bed – that you only have one life, that it is brief and frail, and if you don't take ownership of it nobody else will – were the tenets by which she lived.

She had an extraordinarily full life. By the time she reached 40 she had been a professional dancer, prostitute, madam, lecturer, activist, singer and editor. She had worked with Martin Luther King and Malcolm X, lived in Ghana and Egypt, toured Europe with a dance troupe and settled in pretty much every region of the United States. And then she wrote about it, the whole time crafting a path as a poet, epigrammist and performer. “My life has been long,” she wrote in one her last books. “And believing that life loves the liver of it, I have dared to try many things, sometimes trembling, but daring still."

In a subsequent interview I described her as the “Desiderata in human form” and “a professional hopemonger”. She lived as though there were no tomorrow. And now that there really is no tomorrow, for her, we are left to contemplate – for us as well as her – where daring can get you.

But with her passing, America has not just lost a talented Renaissance woman and gifted raconteur. It has lost a connection to its recent past that had helped it make sense of its present. At a time when so many Americans seek to travel 'color blind', and free from the baggage of the nation's racial history, here she stood, tall, straight and true: a black woman from the south intimately connected to the transformative people and politics who helped shape much of America's racial landscape.

A woman determined to give voice to both frustration and a militancy without being so consumed by either that she could not connect with those who did not instinctively relate to it. A woman who, in her own words, was determined to go through life with “passion, compassion, humor and some style”, and would use all those attributes and more to remind America of where this frustration and militancy was coming from.

When I asked her whether Bill Clinton's presidency had satisfied the hopefulness of the poem she had delivered at his inauguration, she said: “No. But fortunately there is that about hope: it is never satisfied. It is met, sometimes, but never satisfied. If it was satisfied, you'd be hopeless.”

By the time of our second interview, seven years later, her health had deteriorated considerably. She was using a walker rather than a cane; could come down the stairs unassisted but went up in a lift. She was suffering from chronic obstructive pulmonary disease, which left her with a plastic tube attached to her nose for much of the day to give her oxygen. One of her lungs had collapsed. “I smoked for 40 years, so I'm paying those dues,” she says.

But if her body was failing, her mind was in rude health. “Well, I'm dealing with my 81-itis,” she said. “And I expect that next year it will be 82-itis. I don't have as far to go as I had to come. But I'm not making any arrangements, and I plan to keep working as long as I can … I'm fine as wine in the summertime.”