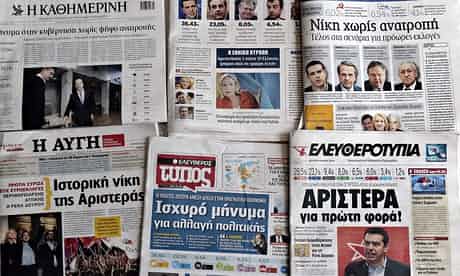 Who's in control – nation states or global corporations?
The Guardian,
Photograph: Louisa Gouliam

The night in 2002 when Luiz Inácio Lula da Silva won his landslide victory in Brazil's presidential elections, he warned supporters: "So far, it has been easy. The hard part begins now." He wasn't wrong. As head of the leftwing Workers' party he was elected on a platform of fighting poverty and redistributing wealth. A year earlier, the party had produced a document, Another Brazil is Possible, laying out its electoral programme. In a section entitled "The Necessary Rupture", it argued: "Regarding the foreign debt, now predominantly private, it will be necessary to denounce the agreement with the IMF, in order to free the economic policy from the restrictions imposed on growth and on the defence of Brazilian commercial interests."

But on the way to Lula's inauguration the invisible hand of the market tore up his electoral promises and boxed the country around the ears for its reckless democratic choice. In the three months between his winning and being sworn in, the currency plummeted by 30%, $6bn in hot money left the country, and some agencies gave Brazil the highest debt-risk ratings in the world. "We are in government but not in power," said Lula's close aide, Dominican friar Frei Betto. "Power today is global power, the power of the big companies, the power of financial capital."

The limited ability of national governments to pursue any agenda that has not first been endorsed by international capital and its proxies is no longer simply the cross they have to bear; it is the cross to which we have all been nailed. The nation state is the primary democratic entity that remains. But given the scale of neoliberal globalisation it is clearly no longer up to that task.

"By many measures, corporations are more central players in global affairs than nations," writes Benjamin Barber in Jihad vs McWorld. "We call them multinational but they are more accurately understood as postnational, transnational or even anti-national. For they abjure the very idea of nations or any other parochialism that limits them in time or space."

This contradiction is not new. Indeed, it is precisely because it has continued, challenged but virtually unchecked, for more than a generation, that political cynicism has intensified.

"The crisis consists precisely in the fact that the old is dying and the new cannot be born," argued the Italian Marxist Antonio Gramsci. "In this interregnum a great variety of morbid symptoms appear."

The recent success of the far right in the European parliamentary elections revealed just how morbid those symptoms have become. Nationalist and openly xenophobic parties topped the polls in three countries – Denmark, France and the UK – and won more than 10% in another five. These victories, election to a parliament with little real power, on a very low turnout, can be overstated. Ukip won just 9% of the eligible electorate, the Front National 10.6% and the Danish People's party 15%. But the trend should not be underplayed. Over the past 30 years, fascism – and its 57 varieties of fellow travellers in denial – has shifted as a political current from marginal to mainstream to central in Europe's political culture.

The problem with describing these parties as racist is not that the description is inaccurate but that, by itself, it is inadequate. For their appeal lies in a far broader set of anxieties about the degree to which our politics and economics are shaped by forces accountable to none and controlled by a few: a drift towards cosmopolitanism in which citizens, once relatively secure in their national identity and financial wellbeing, are excluded from the polity.

The responses to these anxieties have been racially problematic. But the anxieties themselves are well-founded. From the Seattle protests over a decade ago, to the Occupy movement more recently, the left has been grappling with the same crisis. The recent elections produced less impressive but nonetheless significant successes for the hard left. In six countries, socialist-oriented groups critical of neoliberal globalisation got double figures, including Syriza, which topped the poll in Greece. They are also Eurosceptic. However, their base is driven not by a dislike of foreigners but by a desire for more democracy in the EU and more national autonomy.

"It seems clear that … nationalism is not only not a spent force," argued the late Stuart Hall in an essay, Our Mongrel Selves. "It isn't necessarily either a reactionary or a progressive force, politically." It suits the far right to shroud its racial animus within these blurred distinctions in order to appear more moderate. "Our people demand one type of politics: they want politics by the French, for the French, with the French," said Front National leader Marine Le Pen in her victory speech. "They don't want to be led any more from outside. What is happening in France heralds what will happen in all European countries, the return of the nation."

That is unlikely. Quite how these parties turn the clock back and what year they would set it to is not clear. Neither the right nor the left has a solution for this crisis. But while the left holds out hope of building a more inclusive society in the future, the right has built its populist credentials on retreating to an exclusionary past.

In the absence of any serious strategy to protect democracy the right resorts, instead, to a defence of "culture" – reinvented as "tradition", elevated to "heritage" and imagined as immutable. Having evoked the myth of purity it then targets the human pollutants – low-skilled immigrants, Gypsies, Muslims, take your pick. People who wouldn't know a credit default swap if it ran up and kicked them out of their house, but who are as accessible and identifiable as neoliberal globalisation – that force without a face – is elusive.

"Minorities are the flashpoint for a series of uncertainties that mediate between everyday life and its fast-shifting global backdrop," writes Arjun Appadurai in Fear of Small Numbers. "This uncertainty, exacerbated by an inability of states to secure economic sovereignty in the era of globalisation, can translate into a lack of tolerance of any sort of collective stranger." The targets of this intolerance shift according to the context: Roma in Hungary, Romanians in Britain, Latinos in the US and Muslims almost everywhere in the west. But the rhetoric and the true nature of the crisis remain constant. Parochial identities describe the protagonists, but it is global economics that shapes the narrative.

follow on twitter
RT @TalawaTheatreCo: Hey! We're looking for new young trustees aged between 18 and 25. Join us, and help shape the future of Talawa. All d…
RT @RSLiterature: To kick-off our #LiteratureMatters #RSL200 Autumn/Winter events, join @DavidHarewood & @GaryYounge live @britishlibrary t…
RT @gavinesler: The prime minister of the United Kingdom in his own words ….
RT @EuceEsc: We are so excited to announce that during Pitt's #InternationalWeek2021, Gary Younge will be (virtually) delivering the 2021-2…
There are so many wonderful things about this photograph. https://t.co/w46AJycfA1
@DavidHarewood @britishlibrary Can I have your pies?
RT @DavidHarewood: @DavidHarewood /@garyyounge It’s ON! See the heavyweight battle everyone’s talking about! @britishlibrary for ONE night…
@carysafoko @DavidHarewood @britishlibrary Spite. It’s my superpower
Very much looking forward to being in conversation with @DavidHarewood at the @britishlibrary in London on October… https://t.co/ccIdLj0jU8
RT @typemediacenter: For @BritishVogue's September 2021 issue, Type Fellow @garyyounge spoke with the Barbados Prime Minister @miaamormottl…
© Gary Younge. All Rights reserved, site built with tlc
Tadalafil online us How to get a cipro prescription from your doctor Buy sildenafil generic online Buy discount vardenafil Where can you buy cialis Antabuse buy Buy valtrex online with free samples