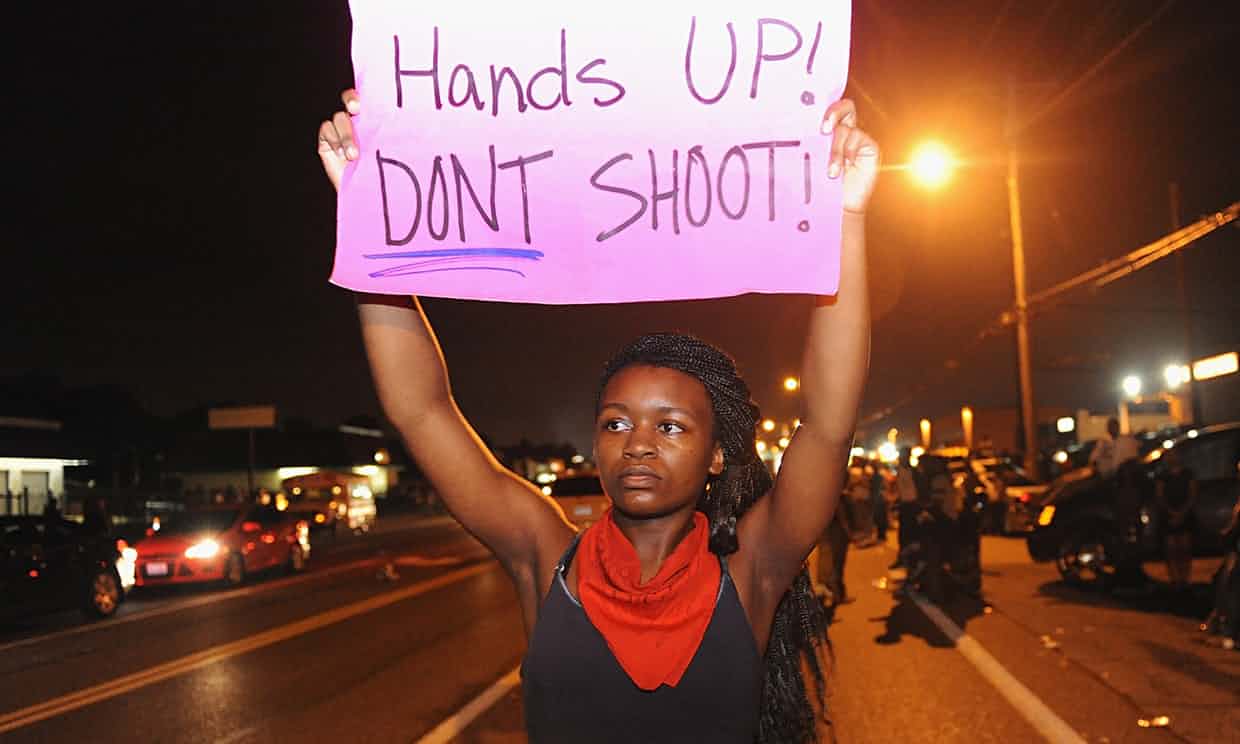 Michael Brown jury: putting a value on a black life in the United States
The Guardian,
Photograph: Michael B. Thomas/AFP/Getty Images

In September 1955, an all-white jury took just 67 minutes to acquit Emmett Till’s killers. Till, 14, said either “Bye, baby” or wolf-whistled at a white woman in a grocery store in Mississippi. Three days later his body was fished out of the Tallahatchie river with a bullet in his skull, an eye gouged out and his forehead crushed on one side. “If we hadn’t stopped to drink pop,” said one juror, “it wouldn’t have taken that long.”

In 2014, racism is more sophisticated but no less deadly. The grand jury investigating the killing of Michael Brown is taking its time. Brown, 18, was unarmed when he was fatally shot by police officer Darren Wilson in the St Louis suburb of Ferguson, Missouri, in August. Wilson has been suspended on full pay and has not been charged. The four-month period that a panel usually convenes for expired last month. The judge gave the grand jury 60 more days to make a decision, so it has until January 7 to decide whether to indict Wilson. That’s a lot of pop.

Clearly the hope has been that passions would calm if the authorities put some time between the shooting and the verdict. But the opposite has happened. Ten days ago, the St Louis symphony was interrupted by protesters singing a requiem for Brown, which received support from some in the orchestra and the audience. At a St Louis Cardinals game earlier this week, protesters for Brown were heckled by Cardinals fans chanting, “Let’s Go Darren”. In Ferguson, a gathering of at least 30 demonstrators meet every night opposite the police station calling for justice.

On Thursday night in St Louis, riot police, brandishing pepper spray, clashed with protesters for a second night following the deadly shooting of Vonderrit Myers Jr, 18, by an off-duty policeman. Friday will see the beginning of a “weekend of resistance” around Brown’s case. It turns out there’s only so many black kids you can shoot dead before it becomes a national scandal. The St Louis area may just have reached its tipping point.

The grand jury decision is not just about the fate of one police officer, it is also about the value of black life. It will determine whether there is a price to pay for summarily removing a man from the planet or whether it’s the cost of doing business when one man has a badge and a gun and the other has too much melanin. Under slavery, an owner would have to be reimbursed for a slave who was deemed unreasonably slaughtered. Under Jim Crow they would leave lynched bodies hanging to warn others of the price of transgression – real or imagined. When Brown’s body was left lying lifeless in the street for four hours before the police collected it, it was an ugly metaphor for the contempt for black life in this post-civil rights, post-industrial moment – dispensable, despised and discarded.

Those who question what the protesters’ violence in Ferguson in August achieved now have their answer. Would you have heard of Brown without it? Would the attorney general have led an investigation without it? Can you name another child who has been killed by the state since then? For there have been many. If it takes a riot for America to remember their names then that tells you more about the country than it does about the rioters.

So long as the grand jury prevaricates we will be asked to suspend judgment until a verdict is in and then let the law run its course. That, we are told, is how society functions. But when black kids fill the jails and the morgues so disproportionately we are in a state of extreme dysfunction and the law – or at least the manner in which it is enforced – is in no small part responsible. “To suspend judgment,” wrote James Baldwin when covering a trial in 1982, “demands that one dismiss one’s perceptions at the very same moment that one is most crucially – and cruelly – dependent on them.” There is more to justice than the law. And the law is too often, too brutally and too brazenly proving itself unjust.

follow on twitter
RT @MCRSociology: Gary Younge discusses identity politics and America with Will Hutton in this episode of @thewesocietypod https://t.co/72…
RT @mart_welton: Congratulations to all those getting their A-level results today. If you have BBB at A-level or above you can still apply…
RT @BernardineEvari: Please follow the groundbreaking online #MuseumofColour UK, founded by the unstoppable Samenua Sesher. The 1st gallery…
RT @EthnicityUK: Gary Younge is interviewed by @sonikkalogan about his work on racism and gun violence in @the_hindu #DataPoint podcast. h…
RT @thefreedomi: 🚨 NEW: Saudi women’s rights activist & academic Salma al-Shehab was sentenced to 34 years in prison + 34 year travel ban f…
RT @LRB: #DawnFosterForever! On Thursday 15 September at the @LRBbookshop, @BizK1, @piercepenniless, Lynsey Hanley and @garyyounge will d…
RT @ShowunmiV: This is how we support Black women and girls https://t.co/8YmgV21zHo
RT @sonikkalogan: It's #DataPoint Pod Thursday! In this week's episode, I talk to @noraneus, @garyyounge and @Casey_J_Wooten about the U.S.…
RT @bgnoiseuk: Next month, @LRBbookshop will host an event to celebrate the life and work of Dawn Foster with @BizK1, @piercepenniless, Lyn…
Help me Twitter. The quote: ""You can cut all the flowers but you cannot keep Spring from coming." is most commonly… https://t.co/Xs7JkiOEd5
© Gary Younge. All Rights reserved, site built with tlc
How to get pravachol in the us Order flomax online Singulair price usa Cost of stendra at walmart Buy azulfidine pill Xenical priceline Get tamiflu Buy trazodone online usa Pradaxa 150 costo Generic zithromax prices