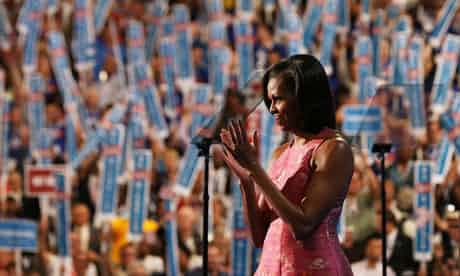 The atmosphere in Charlotte owed more to a renewal of marriage vows than a convention. Delegates arrived not ready to be convinced because they were already convinced and wanted to be inspired. To feel that, despite the contempt that comes with familiarity, infatuation that evolves into an enduring bond was still possible: that a crush would not curdle into cynicism. Outside, unemployment might be up, Guantánamo might be open and the deficit might be rising. But in the auditorium, hope had never died and change was still going to come.

Charged with rekindling the spark of four years ago was first lady Michelle Obama. Unlike Ann Romney last week her task was not to humanise her husband. His life is literally an open, bestselling book – and people generally like what they know. Instead she was charged with reminding them of not so much why she fell in love with him, but why they did. In a moving speech, punctuated by applause and calls for four more years that brought the crowd to their feet, she evoked the social movements of yore from abolitionists to suffragettes with a nod to gay marriage equality. Her insistence that "we're playing a long game here" was a plea over the heads of the convention for more time and more patience.

Shortly before her husband had run for his first political office she'd told an interviewer: "I'm very wary of politics. I think he's too much of a good guy for the kind of brutality, the skepticism." Last night she said she'd never loved him more.

Just as at the Republican convention in Tampa there were plenty of stories of woe. Michelle recalled her severely disabled working class father who greeted each working day with joy and paid his children's college tuition on time – even if it meant taking out a loan himself. She waxed nostalgic about Obama's rusty car and the coffee table rescued from a dumpster. The San Antonio mayor, Julian Castro, who introduced her, described how his Mexican-born grandmother quit school at nine and taught herself to read, thumbing through Agatha Christie novels at night. Like the Republicans, the Democratic speakers hailed America as "still the greatest nation on Earth" that "will prevail" because it thrives on achieving "the impossible".

Every story was calculating, though the calculation was not to promote themselves but to provide a contrast with the Romneys and the Republicans. There were these two key differences. First, while Republicans expressed sympathy for those who struggled in the past, Democrats expressed affinity with those who still struggle in the present. Hard times they couldn't claim for themselves they appropriated as their cause.

Second, for Democrats it was the equality of opportunity that made the inequality of outcome tolerable. While Republicans chanted "We Built That", Democrats implored, "We Could Build Anything (given the chance)".

Since the crowd had come with the intention of being inspired it was almost a self-fulfilling prophecy that they would leave inspired. Obama's name alone brought cheers while chants continued even once the speeches were done. They have been working at this marriage for a long time. For as long as it lasts they intend to enjoy it.