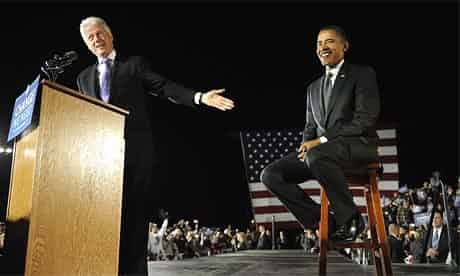 Bill Clinton and Barack Obama: an alliance long and slow in the making
The Guardian,
Photograph: Emmanuel Dunand/AFP/Getty

Back in 1998, as the Monica Lewinsky scandal paralysed Washington, the Nobel laureate Toni Morrison inaugurated Bill Clinton as "our first black president". What Clinton lacked in melanin, the theory went, he made up for in earthly flaws, vicious enemies and folksy charm. His life read like a country ballad; but it just as easily could have been the blues. So when an actual black presidential hopeful showed up almost a decade later, there was bound to be friction. Not least when the candidate in question, Barack Obama, was challenging Clinton's wife, Hillary, for the Democratic mantle.

The ensuing five years have seen the evolution of a contentious relationship of convenience between an old hand, desperate to secure his legacy, who can't let go and a relative novice, anxious to secure his legitimacy, who couldn't get going. When, on Wednesday night, Clinton takes to the stage at the Democratic convention to endorse Obama, will mark yet another chapter in the story of their mutual-dependence.

Obama's choice of Clinton to formally put his name to nomination with one of the most prominent speeches of the week gives the former president both a chance to remind people of the boom over which he presided and for Obama to bask in the glow of an elder statesman associated with good times and a favourability rating far superior to his own. In 2008, Clinton's convention contribution was about party reconciliation; this time,. it's about bestowing credibility on a president who has yet to deliver.

His appearance at this juncture marks an incredible turn around from the acrimony of just four years ago. Clinton's attacks on Obama during 2008 were laced with racial animus. According to Ryan Lizza's recent New Yorker article, Clinton, while trying to seek an endorsement for Hillary, told the late Ted Kennedy, "A few years ago, this guy would have been carrying our bags." In Game Change, we learned that when Kennedy refused his endorsement, Clinton shot back:

"The only reason you're endorsing him is because he's black … Let's just be clear."

Obama, for his part, was dismissive of Clinton's record, comparing the transformative potential of his presidency to Ronald Reagan while ranking Clinton alongside Richard Nixon:

"I think Ronald Reagan changed the trajectory of America in a way that, you know, Richard Nixon did not and in a way that Bill Clinton did not."

Clinton, whose wife by this stage was struggling, was fuming.

The road back from there has been long and steep. "Would I be truthful if I said to you that we went through a long and difficult campaign in 2007-08 and as soon as it was over, the relationship was instantly close?" David Axelrod, the senior strategist in Obama's re-election campaign told the New Yorker. "I mean, that just defies human nature. But I think it's grown up over time."

Obama had to raise the money to retire Hillary's campaign debts. In his choice of Hillary as secretary of state, and the inclusion of former Clinton cabinet members like Larry Summers and the late Richard Holbrooke in his team, Obama turned out not to be so transformative, after all. If the Clintons held a grudge, meanwhile, they did not pursue a grievance. Bill persuaded Hillary to take the job.

In time, as Obama's star waned, the balance of power shifted. Clinton was happy to give the Obama team advice and occasionally be a surrogate. Obama was happy to evoke Clinton's memory on the stump as the last president most can recall who led the country during more prosperous and secure times. And whatever their personal differences they are both Democrats, who, for all the rhetoric, have pursued centrist agendas against a reinvigorated rightwing onslaught and a barrage of personal slurs. Clinton has, at times, gone off-message – as when he criticised attacks on Romney's Bain career – but that owes more to a lack of discipline than a genuine desire to scupper the campaign.

What tension remains is due primarily to their very different temperaments. Clinton is an expansive character: garrulous and clubbable, with a voracious appetite for all things worldly. In his biography, First in His Class, David Maraniss describes a "novelistic" sensibility that means Clinton never leaves a room without knowing almost everybody's story. But that consummate retail politician's skill he had to work to acquire: during his debut on the national stage at the 1988 convention, where he introduced the presidential nominee Michael Dukakis, he droned on for 33 minutes – and when he said, "In conclusion," the crowd cheered.

Obama, on the other hand, is a far more buttoned-up and focused presence, with a tight inner circle of confidants and little real desire to press flesh; he would rather raise the rafters on a crowd of thousands with polished oratory than win people over one at a time. His debut on the national stage, when he introduced John Kerry, was effectively the beginning of his presidential campaign and kept to time.

"Americans would like their president to be sick and needy," explains James Zogby, head of the Arab American Institute and executive member of the Democratic Executive Committee. He elaborates:

"Bill Clinton would shake literally tens of thousands of hands every Christmas. Each person he'd meet would say: 'I think he remembered me.'

"Obama doesn't like to do it. No real person would like to do it. And therefore, he doesn't do it. And people resent that. They want their president to really need them. He doesn't. He's OK, he's relaxed, cool, calm. I'd love him to call me up like Clinton would … people like that; he doesn't need it."

Until election time, that is. Obama was told by Clinton insiders that if he wanted the former president's help, he would have to work for it. Obama invited Clinton for a round of golf; and from there, something like a cordial, mutually-beneficial working relationship has emerged. Wednesday's prime-time appearance will give Bill Clinton one more chance to play father to the party and uncle to the nation – holding the baton of presidential presence up to the spotlight one more time before handing it back to his successor.

For Obama comes the chance associate himself with an experienced coach who can help him to the finish line.