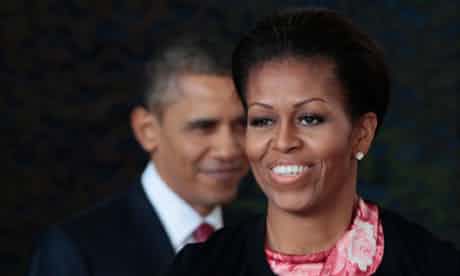 When asked if she found it limiting to be described as a black woman writer, Nobel laureate Toni Morrison replied:

“I’m already discredited. I’m already politicised, before I get out of the gate. I can accept the labels because being a black woman writer is not a shallow place but a rich place to write from. It doesn’t limit my imagination; it expands it.”

Generally invisible to the broader culture and polity unless they are being vilified as “welfare queens”, objectified as sexually incontinent or chastised for being domineering, it is only in the rejection of almost every societal expectation thrust upon them that black women stand any chance of doing anything more than survive.

Attempts to discredit and politicise Michelle Obama before she got out of the gate were legion. There was the utterly fallacious allegation that she was caught on video shouting out “whitey”. New York Times columnist Maureen Dowd suggested she was “emasculating” her husband. Then came the cover story of National Review, a conservative magazine, branding her “Mrs Grievance”, which read:

“She was among the first generation to benefit from ‘affirmative action’, which was supposed to ameliorate the lingering grievances of racism but seems, in Mrs Obama’s case, merely to have transformed them into post-modern pseudo-grievance.”

Her patriotism was questioned when, with her husband leading a month into the primaries, she said: “for the first time in my adult life I am proud of my country because it feels like hope is finally making a comeback.” In the last few months, she’s been booed at a Nascar rally, while a Republican congressman was overheard lampooning the size of her behind.

So, when she complained earlier this week that she was tired of being labelled as “some kind of angry black woman”, she had a point. As she explained, “That’s been an image people have tried to paint of me since the day Barack announced.” This time, her (justified) ire was targeted at allegations in a new book, by the New York Times’s Jodi Kantor, that claims she was an “unrecognised force” within the White House, initially “bristled” at the restrictions of her new role and was often the source of tension within the president’s inner circle.

But while she had a point, I’m not convinced it was the point. The specific anecdotes in the book are impossible to verify one way or another. The Obama machine is less porous and candid than the last George Bush’s when it comes to the media, so there is almost no way of covering them at that level, beyond hearsay. I’ve heard say, from reliable sources, that playing the role of first lady has left her deeply unhappy. “Get me out of this prison” was the secondhand quote I was told.

There’s no way to verify that, either. But it’s logical for a few reasons, both personal and political. The first lady is a 19th-century construct: subservient, deferential, decorative and uncontentious – the job description demands that you be your husband’s adjunct. Many have struggled with it, but few – with the exception of Eleanor Roosevelt – have been successful.

Take Hillary. “Meet the new political wife,” said Ted Koppel introducing her in 1992. “She has a career, she has opinions.” When Bill Clinton started his political life, her name was Hillary Rodham. After she was slighted for pursuing her own career, she was further lambasted when she said: “I suppose I could have stayed home and baked cookies and had teas “ By the time she left the White House, her name was Hillary Clinton and she’d won a Family Circle bake-off with her recipe for chocolate chip.

Michelle Obama is an Ivy League graduate from a working-class background, who met her husband when he was assigned as her mentee in a top legal firm. She was his superior in almost every way. As he freely acknowledges in his book Audacity of Hope, his political career would not have been possible without Michelle subsidising his self-promotion by dedicating more of herself to raising their daughters. There is precious little in the position of the first lady, as it is understood, that would satisfy a woman this accomplished.

It would also not be unusual, in modern relationships, for spouses to talk to each other about their jobs and make suggestions. Particularly so when it comes to his job, since she wouldn’t have to ask, “How did your day go, dear?” She could just turn on the TV or pick up a paper. Having uprooted her family, abandoned her own priorities and stuck a target on her back, she gave up a great deal for his ambition and has a considerable investment in him making a success of it. True, no one elected her. But as the previous examples show, they certainly vetted her and they didn’t elect any of the appointees she was criticising either.

Moreover, while she indulged Barack’s political aspirations, she never fully embraced them. “I’m very wary of politics,” she said shortly before he ran for his first political office, as quoted in David Remnick’s The Bridge.

“I think he’s too much of a good guy for the kind of brutality, the skepticism. When you are involved in politics, your life is an open book, and people can come in who don’t necessarily have good intent. I’m pretty private and like to surround myself with people that I trust and love. In politics, you’ve got to open yourself to a lot of different people.”

Of the various ways in which one might make a difference, Michelle saw electoral politics as one of the least effective. After he was thrashed in his congressional challenge against Bobby Rush – a race she discouraged him from running – she said:

“My hope was that, OK, enough of this … now let’s explore these other avenues for having impact and making a little money, so that we could start saving for our future and building up the college fund for our girls.”

None of this makes her stereotypically angry. But it is not a stretch to think that the trajectory of her husband’s presidency might have left her frustrated and disappointed. As one person Kantor quoted said: “She feels as if our rudder isn’t set right.” That hardly makes her Lady Macbeth in blackface. Indeed, it leaves her in the same place as most of those who voted for her husband.

• This article was amended on 5 December 2016 to correct a misspelling of Hillary Clinton’s first name.