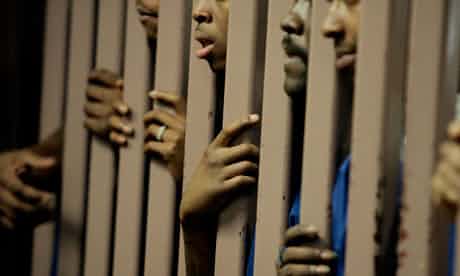 For too many African-Americans, prison is a legacy passed from father to son
The Guardian,
Photograph: Ric Francis/AP

According to Jeffrey Gamble, the luckiest day of his life was when his car hit the kerb at the corner of Jefferson and National in Los Angeles while he was drunk-driving. It flew over a fence, falling 80ft into a creek below, leaving him with a broken neck and paralysed. "If I hadn't had that accident, I would be dead – or in jail for the rest of my life, just like my brothers," says Gamble, 47. Prison, for the Gambles, is as common a destination as university might be for a middle-class family. His two brothers are both in jail. Ricky, who was convicted for burglary and assault with a firearm under the three strikes law, is in for 110 years to life. Mike got life without parole for the murder of a local councillor. His father was in jail for a series of alcohol-related offences. His son, Khalif, has also been in jail for dealing drugs and possession.

"It's not just that we didn't fear jail," says Jeffrey, who now uses his experience to warn youngsters away from gangs and prison. "It was like a rite of passage. You needed to go to jail so you could have that badge of honour." Three generations of African-American men enmeshed in the criminal justice system. A legacy of incarceration passed from father to son. A cycle that just won't break.

When Martin Luther King, whose birthday is marked across the United States on Monday with a national holiday, adopted Mahatma Gandhi's call to "fill the jails" 50 years ago, he didn't mean this. Back then, the aim was to delegitimise the prevailing power structure by removing the stigma from protesting against unjust laws. Today, imprisonment is not an act of resistance but a fact of life. It is both the product and cause of social collapse in many black communities, where full jails do not challenge racial inequalities but sustain them.

For decades the issue never entered mainstream debate unless an increasingly desperate right wing decided to ramp up its race-baiting rhetoric. (The man who delivered the racist Willie Horton ad for George Bush Snr's campaign in 1988 now works for Team Romney). On a local level it is back on the agenda because the states simply cannot afford it: California spends $47,102 per inmate per year. It is a national disgrace. The mass incarceration of African-Americans is the civil rights issue of the day. The statistics are horrific.

One in three African-American boys born in 2001 stands a lifetime risk of going to jail, according to the American Leadership Forum. In 2007, one in every 15 black children had a parent in prison. According to Ohio State University law professor and author Michelle Alexander, there are more African-American men in prison, on probation or on parole in the US now than there were enslaved in 1850. Alexander also calculates that because felons lose the right to vote, more African-American men were disenfranchised in 2004 than in 1870, the year male franchise was secured. There are now roughly the same number of black men in American prisons as the populations of Glasgow and Derby combined. Black women are seven times more likely than white women to be in prison. Almost one in 10 young black men are behind bars.

Exclusion does not end with prison but begins there. In many states, felons lose the right to vote and sit on juries for ever. Sometimes conviction isn't even necessary, arrest is enough. Whether you are eventually found guilty or not, the fact you have been arrested can be enough to thwart your chance of getting a job or housing.

Broadly speaking, there are two opinions about how so many African-Americans could have ended up in this situation. The first is that black people are genetically pathological; the second is that societal factors are at play. For those who believe the former, turn the page. There are other papers for you and other days. The very fact that King's birthday is commemorated indicates that such bigotry is no longer officially accepted.

Like many Conservatives, Mike Reynolds, who launched California's three strikes initiative after his daughter was murdered by convicted felons, believes the key societal factor is an over-generous welfare system that encourages black women to have children and black men to abscond. In the case of the Gambles, nothing could be further from the truth. Jeffrey's mother says she had no idea he was involved in crime from the age of eight because she was holding down two jobs.

Indeed, the extent to which the problem is economic means that for most of those who end up in jail it's not too much welfare, but too few jobs. Black unemployment currently stands at almost 16%. For young black men between the ages of 16 and 19 (those at risk of entering the criminal justice system) it is almost 50%. "In the past in the civil rights movement, we have been dealing with segregation and all of its humiliation; we've been dealing with the political problem of the denial of the right to vote," King said, just 10 days before his death. "I think it is absolutely necessary now to deal massively and militantly with the economic problem." But that shift in emphasis from race to class demanded allies who were too few, and too weak.

As Jeffrey saw it when he was growing up, he had two choices: a long life scraping by on the minimum wage, if he was lucky, or a shorter one on the streets that promised fast money and either death or prison. He grew up in the shadow of the university of southern California, but it might as well have been a foreign country: "The only thing we went to USC for was to break into their cars when there was a game on, and sell weed," says Jeffrey.Khalif's choices are not much different. He wants to be a truck driver. But with a criminal record, work is as hard to come by as the $500 he needs to enrol in a driving course. To escape the lure of crime, he moved 70 miles away to Lancaster, where he stands on the street for five hours a day earning the minimum wage for holding up a sign directing hopeful house buyers. "It's a struggle," he says. "But it's better to go that way than the wrong way."

Each of the Gambles must, and does, take personal responsibility for the decisions they make; but society must answer for the options that were available to them and others. As King wrote in his "Letter from a Birmingham Jail": "We will have to repent in this generation not merely for the vitriolic words and actions of the bad people, but for the appalling silence of the good people."