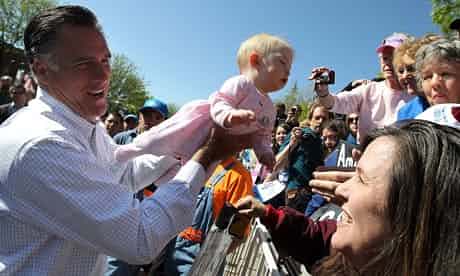 Mitt Romney is too rational for a deluded Republican base
The Guardian,
Photograph: Justin Sullivan/Getty

Last September, when Barack Obama's approval ratings were in the low to mid-40s and a clear majority of Americans said he did not deserve a second term, veteran pollster Charlie Cook described his ideal Republican opponent as "odourless and colourless". With unemployment and the deficit so high and gridlock so stubborn, he explained, a challenger who did not repel independents or unnecessarily antagonise Obama's base should have little problem defeating the president.

The trouble was that almost all the Republican contenders during the primary were either extremely colourful or, as candidates at least, stank. There was Newt Gingrich, who wanted to build permanent bases on the moon and, according to his ex-wife, demanded an open three-way relationship with the mistress who is now his current wife; Ricky Perry, who could not remember his own talking points; and Herman Cain, who was accused by several women of sexual harassment and proudly stated that he did not know the name of the president of "Ubeki-beki-beki-beki-stan-stan". Each, for a while, was a frontrunner.

So when people wonder how Mitt Romney became the party's standard-bearer they need to first remember just how low the standards were. To make sense within the Republican party was, almost by definition, to appear nonsensical outside it. More credible candidates took a look at what you'd have to say and do to compete and decided to sit the election out.

After a fortnight of gaffes and worsening poll numbers critics have rounded on Romney's campaign (which is turning into a circular firing squad) and his personal failings as a candidate (a wooden, awkward campaigner who can't relate to ordinary people). But his flaws as a nominee are only properly understood in the context of the flaws of the party that nominated him. Romney's not letting the party down. Quite the opposite. He's a far more plausible, competent and rational a candidate than it deserves. The urgent question is not why, for the time being, the race seems to be getting away from him, but how he has remained in contention for so long.

True, this was supposed to be the Republicans' election to lose. When Obama was pitted against a ("colourless", "odourless") generic Republican in polls, he was defeated. The trouble is, the more voters see what qualifies for a generic Republican the less keen they are to have anything to do with one.

It's not difficult to see why. Over the past few years Republicans have come across as particularly heartless. During one primary debate, Texas governor Rick Perry was cheered when introduced as a man who'd overseen 234 executions. Joe the Plumber, now a congressional candidate in Ohio, spelled out his plan for dealing with illegal immigration: "Put a fence on the damn border and start shooting."

They are none too keen on facts. The percentage of Republicans who believe Obama is a Muslim has doubled in the last four years and now stands at about one in three, the same proportion of Republicans in the swing state of Ohio who still do not believe Obama was born in the US. They are not particularly interested in consensus, either. Two thirds of Republicans said they'd rather have a congressperson who stuck to their principles no matter what than one who compromises to get things done. They give little impression of being inclusive. Asked why they thought so many African Americans supported Democrats, the most common opinion among those with a view was because of welfare dependency. And they appear stuck in the past. More than one in four Republicans in Mississippi and one in five in Alabama believe interracial marriage should be illegal while closer to two thirds in both states do not believe in evolution.

Such is the extremeness and eccentricity of those to whom Romney must appeal for votes and cash. To be fair, Romney saw this coming. In February he said: "It's very easy to excite the base with incendiary comments ... I'm not willing to light my hair on fire to try and get support. I am who I am." By July, Sarah Palin was insisting the least he could do was throw a match and some gasoline her way. ("Well, light our hair on fire, then!," she told Fox News). Now he's in the process of fullblown self-immolation, and his candidacy is on the brink of crashing and burning.

"The appearance of a Republican party almost entirely composed of ideological conservatives is a new and historically unprecedented development," writes Geoffrey Kabaservice in Rule and Ruin: The Downfall of Moderation and the Destruction of the Republican Party. "It is only in the last decade or so that movement conservatism finally succeeded in silencing, co-opting, repelling, or expelling nearly every competing strain of Republicanism from the party."

The New Yorker's Ryan Lizza points out: "The number [of Republicans] who call themselves liberal is now close to the number who describe themselves as Aleut or Eskimo."

Romney understands this problem. He was raised with it. At 17 he saw his father George, the governor of Michigan, walk out of the 1964 convention after a futile bid to challenge its extremist platform. That year, Gerald Ford symbolically nominated George from the floor, describing him as a man who "has never let the temporary glitter of expediency obscure the path which his integrity dictated he must follow".

And, as the governor of Massachusetts, one of the most reliably liberal states in the country, Mitt has worked with it. In September 2002, shortly before his gubernatorial election, he told a group of pro-choice campaigners that for all their differences they could make common cause. Melissa Kogut, then head of Massachusetts Naral, told the Washington Post. "He closed the meeting by taking on a just-between-us tone and saying, essentially, 'You need Republicans like me. And the party needs candidates like me, because this issue is killing the party.'"

The party he tried to save is dead; the party he represents now deluded. When he speaks candidly within it, he exposes its contempt for the poor in particular and the electorate's intelligence in general. When he speaks carefully outside of it, he exposes its contradictions: driven by the fringe but appealing to the mainstream. This is not a problem of Romney's making; it's the problem that made Romney's candidacy possible.

• This article was amended on 24 September 2012. The original said that, of Republicans asked why they thought so many African Americans supported Democrats, "more than half said because they are government dependents while one in six insisted it was because they were uninformed, ignorant or uneducated". This was based on numbers in a poll that were assumed to be percentages, but were in fact raw counts.

follow on twitter
#JosephineBaker ceremony in Paris https://t.co/M8gg06zfTl
RT @SynergiCC: On Thursday, watch out for the release of @JamesNazroo's presentation on #BLM, #racism and #health harms in the UK. #FromPle…
This is basically the thread I put out last night...but soooo much fancier-looking. https://t.co/bWUIGEmtBY
@tjr_london In Paris for the Josephine Baker ceremony I'm afraid.
RT @BritishVogue: As she leads Barbados towards republicanism, charismatic Prime Minister Mia Mottley talks to @GaryYounge about shaking of…
RT @MCRSociology: As #JosephineBaker is elevated to the pantheon today, @garyyounge writes on race, racism and republicanism in contemporar…
@PriyamvadaGopal Thanks @PriyamvadaGopal . Where would I find a comprehensive account of that conference or start l… https://t.co/40Ud2rS6Kj
"African Americans enjoyed an honorary, if contingent, racial status: free to write about racial atrocities in Amer… https://t.co/vRobBofK5D
@chakrabortty What a lovely message. I miss those days. I miss you (not sure I miss the office as such. In Farringd… https://t.co/eviENdkaAp
6/ "Mine is a name with a story from afar, that doesn’t have to be told, that is not often misspelt and that doesn’… https://t.co/F47tepvsxY
© Gary Younge. All Rights reserved, site built with tlc
Antabuse buy Where can you buy cialis Buy sildenafil generic online How to get a cipro prescription from your doctor Tadalafil online us Buy discount vardenafil Buy valtrex online with free samples