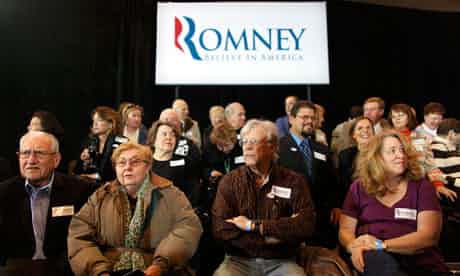 With Mitt Romney, ever silvery lining comes with its own cloud. Tuesday night, he won primaries in Michigan and Arizona, re-establishing his position as the frontrunner for the presidential nomination. But he still finishes the week with his presidential prospects weaker than he started it – and with his party unconvinced by the merits of his candidacy.

When the race began, the notion that he would have to fight hard and spend heavily to win Michigan – the state in which he was born and grew up, where his father was governor and which he won in 2008 – was unthinkable. In the end, he edged out Rick Santorum by just a 3-point margin. In Arizona, where one in seven share his Mormon faith, he romped home with a 20-point lead.

But even there, according to exit polls, 47% of his supporters said they had reservations. In Michigan, it was 44%. In both cases, it was a higher proportion of doubters than any other candidate. And if those who vote for him aren't sure, that does not bode well for those who need convincing. Michigan is a state Republicans hope to win come November.

Last November, Romney was beating Barack Obama there by 5 points. By the end of last month, Obama had an 8-point lead.

And so Romney limps on toward the convention, his speeches full of gaffes and his pockets full of cash. Occasionally defeated and increasingly damaged, he is carried along by the best campaign that money can buy. His ability to clinch the nomination remains in a fragile limbo. His ultimate victory is neither in doubt, nor quite beyond doubt. The party establishment cannot countenance any other candidate becoming the nominee. But the fickle base cannot stop experimenting with alternatives.

Polls suggest more turbulence ahead. Ten states are set to vote next week on Super Tuesday. Of the six that have been polled, Santorum leads in three (Ohio, Oklahoma and Tennessee), Newt Gingrich leads in one (his home state of Georgia) and Romney in just two (Massachusetts, where he lives and was once governor, and Vermont, which is next door). On Saturday, Washington state also has a caucus; Santorum is leading there, too.

"They got good benefits and a good wage, and some of them earned enough that they thought they were Republicans," said one retired union organiser and Democrat, who mischievously voted for Santorum because he thought he'd be a weaker candidate against Obama. "But Republicans aren't there to represent the working man and it took them a while to realise that."

The single most likely thing to bring Republicans to the polls there and across the state was the economy. Parts of the county, which saw a 45% increase in food stamp usage between 2007 and 2009, have clearly seen better times.

"These people were hit hard by the crisis," explains Greenberg. "And they are a very volatile group. In 2008, white non-college-educated voters showed a 16-point swing to Obama. In 2010, there was a 16-point swing back to the Republicans."

Maccomb is an archetypal swing area. Al Gore won it in 2000 by 2%, John Kerry in 2004 lost it by 1% and Obama took it by 8%. But while Romney won the county, he lost that key Reagan Democrat demographic, trailing Santorum in Michigan among those who have no college degree and earn less than $100,000; while Romney won among college graduates and the very wealthy.

"They're a very big part of the Republican base and make up a large proportion of independents," explains Greenberg. "And they don't like Romney very much."

Paradoxically, for a party wedded to free-market ideals, one of the reasons they don't like him is related to his personal wealth and broader economic inequalities. Contrary to popular perception, Romney's problem is not that he is filthy rich – his personal wealth amounts to double the combined wealth of the last eight presidents, going back to Richard Nixon – or the scion of a powerful family. None of that hurt George W Bush.

Romney's problem is that he acts rich in a time of economic crisis and in a manner that makes people think he has no idea how ordinary people live. His most excruciating gaffes have not arisen when he forgot to stop boasting about his riches, but when he went off script to try to show how down-to-earth he is. He took time away from Michigan at the weekend to make an appearance at a Nascar rally, the speed racing event in Daytona, Florida, which attracts an important Republican demographic – white, non-college-educated men. Asked if he followed the sport, he said: "Not as closely as some of the most ardent fans, but I have some friends who are Nascar team owners."

Reminding his audience last week that he likes American-made cars, he said his wife, Anne, "has a couple of Cadillacs" – for two of their luxury homes. When chatting with some New Hampshire voters, he said he knew the fear of unemployment and "there were a couple of times I wondered whether I was going to get a pink slip" – which, given his wealth, is hardly credible.

These are not just howlers in themselves. They relate to the broader concerns about his inauthenticity as a candidate. Having taken, at best, contradictory and, at worst, conflicting positions on abortion, healthcare, gay rights and global warming, his failed attempts to connect compound the impression that he's a phoney.

On top of that, there is the issue of the way he made his wealth. As a venture capitalist at Bain, he bought companies, restructured them, which often meant dismantling the companies and firing people. Republicans may be ardent supporters of capitalism. But some, like a meat eater in an abattoir, find this particular part of the process makes them queasy.

Part of the populist appeal of the Tea Party was that, even as it did the bidding of big business, it railed against Wall Street. Early on in the race, his opponents, and particularly Gingrich, made much of this branding him a "vulture capitalist". Campaigning for the presidency is, in no small part, about presentation and performance. Back in 2008, his opponent, Mick Huckabee, said, "[Romney] looks like the guy who fires you, not the guy who hires you."

As a result, these primaries have seen two competing visions of capitalism set against each other: one a system of effete bankers and financiers and the other of small businessmen and working people. Santorum, with Romney's help, has cast Romney as the representative of the former while himself posing as the defender of the "little man". Greenberg, who has been surveying the electoral scene for many years, says this kind of cleavage is something new.

"What's different about this election is that while the Republican party might divide in terms of class, they don't usually divide on class issues but social issues," he explains. "There was a big class divide between those who supported Huckabee and McCain, but it was played out over social issues. I haven't seen this happen before. If you look at the key places where Romney has faltered, class-based attacks have been important."

At a Santorum rally in Lansing, where the crowd broke out spontaneously into God Bless America while waiting for their candidate, one supporter, who employs five people, explained why he was wary of Romney.

"I get the feel he's more for big business. I love Nascar and he has friends who own Nascar teams and it's difficult to relate to that."

Romney winning here means the Republicans have dodged a bullet. A defeat Michigan would have unleashed speculation about drafting new candidates and thrown the entire nominating process in into complete chaos. Thanks to his narrow victory Tuesday night, the party is, instead, only in disarray.