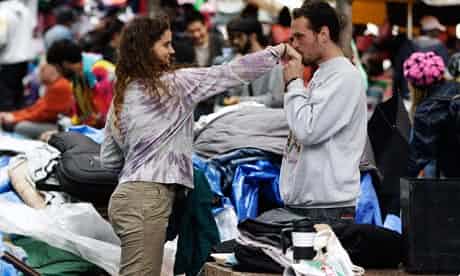 The itinerant US left has found its home in the Occupy movement
The Guardian,
Photograph: Lucas Jackson/Reuters

At the auction of foreclosed homes at Queens supreme court in New York, the official carefully explained the process for one person to make an offer on another person's misery. As the bidding was about to begin on what was once the home of Valencia Williams, around 20 people stood up and started to sing: "Mr Auctioneer / And all the people here / We're asking you to call off the sale right now / We're going to survive but we don't know how."

As the clerk ordered them to sit down and be quiet, or face arrest, some left but others remained standing, repeating the single laconic verse. They were still singing over the clink of handcuffs, and as they were led out of the room. Each time an officer opened the door to take a protester out, the singing from the hallway would seep back in. Finally, when the room had been cleared, the auctioneer put Williams's home back on the block.

Earlier that morning, at an orientation session, the organisers spelled out their goal to the protesters. The aim was to intervene at the moment where the American dream (home ownership, individualism, social mobility) meets the American reality (poverty, corporate greed, vulture capitalism). They hoped not just to disrupt but to stop the process and force a reckoning between the antiseptic atmosphere of the auction and the grim consequences of the eviction. "We have two objectives," said one of the leaders. "To bring as much beauty to this ugly event as possible, and to shut this shit down."

The legacy of Occupy Wall Street (OWS) is still in the making. Those who believe it came from nowhere and has disappeared just as quickly are wrong on both counts. Most occupiers were already politically active in a range of campaigns. What the occupations did was bring them together in one place and refract their disparate messages through the broader lens of inequality. The occupations were less an isolated outpouring of discontent than a decisive, dynamic moment in an evolving process.

Over the last decade in the US there has been an itinerant quality to the progressive left. Activists have sought shelter in the anti-war movement, Howard Dean's primary campaign, gay rights, immigrants' rights or the Obama campaign. Each more powerful and hopeful than the last; each too narrowly focused and lacking the social or economic base to sustain it. In the occupations, these political vagrants found a home.

The trouble is (as London's St Paul's protesters, whose appeal against eviction was denied last week, can testify) that while this home offered space for debate and organisation, it was no less precarious than the house of Valencia Williams in Queens. Vulnerable to harassment and eviction by the state, it was only a matter of time before they were moved on.

But while taking over public land to advocate for the public good has had an important practical and symbolic function, it was never the sole or even primary aim of the occupations. The dismantling of many encampments has not prevented the activists who were drawn to it from continuing with the work they were doing before.

Indeed, the occupations have left them re-energised and reinvigorated, with new recruits and a broader template within which to work. Accusations that they were too vague, too white and too elitist to engage with the needs of ordinary working people have been contradicted by the many concrete actions they spawned or to which they are connected.

"The occupation was always about values," explains Michael Premo, who was one of the founding organisers of OWS and involved in the action to block the auction in Queens. "It was about reconfiguring the relationship between people and profit so that people are privileged instead of profit. There's a natural affinity between those values and struggles over housing and land."

The radical Brazilian educator Paulo Freire once asked, "What can we do today so that tomorrow we can do what we are unable to do today?" The occupations have been central to creating new possibilities.

Organising for Occupation (O4O), which executed the protest in Queens, was working on issues of housing justice months before OWS emerged. "The campaigns are separate but there is some crossover," explains Karen Gargamelli of O4O. All those I spoke to in Queens had been involved in OWS in some fashion.

In Nashville, Occupy Our Homes, which came directly out of the Occupy Nashville movement, forced JP Morgan to back off the foreclosure on Helen Bailey, a 78-year-old veteran civil rights activist. Roughly half those involved in the campaign were housing activists before, explains one activist, the others came to it through the occupation.

In Portland, Oregon, WeAreOregon has been working against foreclosures for some time, and is now concentrating on persuading people to stay in their homes and not be intimidated by the banks. It has been joined by Unsettle Portland, which came out of the occupation. Earlier this month they packed an auction and helped delay the eviction of a single mother while she challenges the banks.

Polls have shown almost twice as many Americans agreed with OWS than disagreed with it. Far from alienating middle America, the movement has captured the public and political imagination. It has shifted the national debate from debt to inequality and the focus of the problem from victims of the crisis (the poor) to its perpetrators (the financial institutions). A Pew poll released in December revealed 77% of Americans believe there is too much power in the hands of a few rich people and corporations, while those who believed "most people who want to get ahead can make it if they are willing to work hard" was at its lowest point since the question was first put in 1994.

It also has the Republicans rattled. In his address to the Republican Governors Association in December, rightwing pollster Frank Luntz said: "The public … still prefers capitalism to socialism, but they think capitalism is immoral. And if we're seen as defenders of quote, Wall Street, end quote, we've got a problem."

The relationship between the physical space that the occupation movement has held and its political efficacy has not been settled – and perhaps never will be. Its importance doesn't lie in what it means, but in what it does. It started by changing how people think about the world they live in; now it's strengthening their confidence to change it.

• This article was amended on 27 February 2012, correcting the name David Premo to Michael Premo